A low-key dramedy about recent immigrants 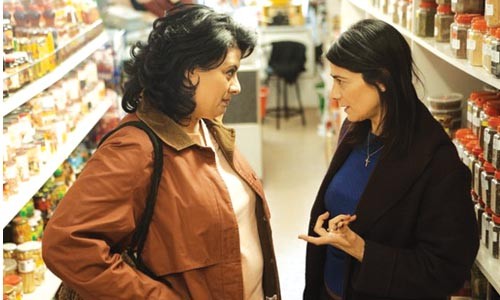 Muna (Nisreen Faour), a Palestinian single mom living in the West Bank, leaps at the chance to provide a better life for her teen-age son, and emigrates to the United States. But the excitement of moving in with her sister's family in an Illinois town soon wears off. Muna can find only a low-paying job at White Castle -- and worse, the ongoing invasion of Iraq leaves the entire family open to harassment by the locals. Cherien Dabis' dramedy mines familiar turf: The grass isn't necessarily greener elsewhere -- or, as Muna explains to her frustrated son: "Life sucks everywhere." With the exception of an f-word or two, Amreeka could be a Hallmark TV movie: Its points are easily gleaned, and the themes are solid, if somewhat simplistic -- family, tolerance, perseverance and support from unexpected sources. Faour, though, gives a warm performance -- you can't help but root for Muna. In English, and Arabic, with subtitles. Starts Fri., Nov. 13. Manor