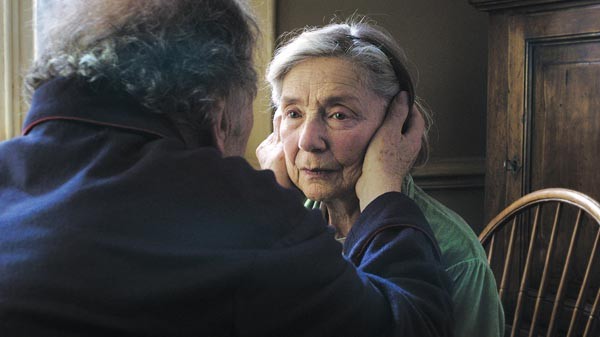 Not all is fair in love: Jean-Louis Trintignant and Emmanuelle Riva

In French, with subtitles.

"Did I mention that you look very pretty tonight?" says Georges (Jean-Louis Trintignant), a very old man, to his wife, Anne (Emmanuelle Riva), a very old woman, after the two return home from a concert. "What's come over you?" Anne replies, as plainly as Georges' declaration.

The answer, of course, is love, and Georges has been afflicted for a long, long time. In Amour, the gifted German director Michael Haneke explores this eternal-cum-mortal relationship with ease: His film is a patient slice of life, and another work in an extraordinary canon of cinema.

Amour opens with Anne dead in her bed, gently laid to rest among strewn flower petals, her body discovered by firemen who break in after receiving a call of concern. Then, we're at the concert given by one of Anne's piano students, and the spirited couple chats with friends in the lobby afterward. They return home to find that someone has broken into their Paris apartment. "Imagine if we're in bed and someone breaks in," Anne says. Of course, we don't have to imagine: We've just witnessed that very thing.

This is as close as Haneke comes to irony. The rest of Amour is simple, and terribly sad: The next morning, at breakfast, Anne disappears — unaware of anything, unresponsive to Georges' words. The episode is brief, but it leads to an operation that doesn't cure her condition. So now Georges must preside over the slow merciless death of his beloved.

It takes a humane and courageous artist to make a film like Amour, and it's even more startling in light of Haneke's earlier work: brutal films like Funny Games and The Piano Teacher, and recondite ones like Caché. It's a meticulous drama, and filled with suspense: You know what happens in the end, but you don't know what happens next. Only one thing belies its verité: the vigorous performances of its octogenarian actors, two icons of the French cinema, so clearly in control of every gesture and word.

When Anne goes into her deepest decline, Georges tries to prevent their daughter from seeing her. "None of that deserves to be shown," he says, protecting Anne's dignity. And yet, Haneke shows us, albeit in short doses, often cutting away before it becomes unbearable to watch. He counts on us to understand, and he asks us to join hearts and participate. Anyone who turns him down might as well be dead.