Many foreign cuisines, notably Italian, Chinese and, more recently, Mexican, have become so assimilated into our national appetite that they are almost American. Now, we are such old geezers that we remember a time when around here Mexican food was represented almost exclusively by cheesy -- literally and figuratively -- chain restaurants in suburban malls. Our tastes and our expectations of Mexican food are more sophisticated now, and so are the restaurants' -- at least some of the time.

Amigos, located in the Galleria in Mount Lebanon, is one of the newer breed of Mexican eateries offering mall-goers a salsafied respite between sprees. It is owned by the group associated with Mount Washington's LeMont, Downtown's Café Euro and the prior tenant of its own space in the Galleria, Jake's Beef & Barbecue. Given this pedigree, we didn't exactly expect a taste of regional Mexico, but a few menu items, including skirt steak and shrimp fajitas and table-prepared guacamole, led us to hope for a superior experience.

To be sure, the décor -- which pretty much consists of the old Jake's cowboy theme, recycled and accented with colorful south-of-the-border weavings -- was a step up from generic Mexican-American. The walls were lined with cherry-toned wood paneling, and the lighting, some of it delivered by colored bulbs in bull-horn chandeliers, was bright enough for menu-reading without approaching the level of a surgical theater. The complementary tortilla chips were large and warm, made with finely ground corn, and the smooth salsa was based on cooked tomatoes, which made a nice change from the ubiquitous canned-tomato version.

Two appetizers, the aforementioned guacamole and a skewered chicken dish called "Texas toothpicks," looked distinctive, and we tried them both. The former was, in effect if not in presentation, quite authentic, while the latter was very much a gringo application of Mexican flavors to a familiar American preparation. (Not that there's anything wrong with that: Both Tex-Mex and Mexicali cooking get as much credence as authentic Mexican in our book).

We liked them both. The guacamole, crushed and mixed by our server in a heavy lava-stone mortar and pestle, had a balanced flavor bursting with the obvious freshness of the just-combined ingredients. One quibble was with the lime juice. Amigos' protocol apparently is to pour it first, but if it had been added later, its bright, tart flavor might have pervaded the finished guac more fully. Meanwhile, the chicken in the Texas toothpicks was moist and very tender with a few crisp edges and a surprising strength of sweet-sour flavor given the absence of a visible sauce. A far more common appetizer, a cheese quesadilla, was competent: a crisply toasted tortilla folded over melty but not greasy cheese.

Angelique ordered what our server reported to be Amigos' most popular dish, the chicken enchiladas. These were packed with fine shreds of moist chicken, a vast improvement over the few large, dried-out chunks that too often pass for restaurant enchilada filling. The tortillas were tender, and the salsa verde was good, but too subtle. A cap of melted cheese all but completely obscured the delicate tang of the green tomatillos, depriving the dish of its most interesting flavor dimension.

Skirt steak is the quintessential cut of beef for Mexican grilling, but until recently it was all but unknown to Americans in most regions. Partly thanks to the increase in the Mexican population in the U.S., it is no longer such an exotic item, and no longer so cheap, either. We were happy to see it featured on Amigos' menu, particularly Jason, who grew up savoring this distinctively tender and flavorful cut. On the steak-and-shrimp fajita, the meat was robustly beefy and well seasoned by its marinade, lime-tart but with earthy undertones. But the show was stolen by the shrimp, which wore the marinade like a flattering dress.

Marketed as it is to the customers of national chains, Amigos doesn't challenge the palate, nor does it pander to the lowest common denominator. It presents familiar Mexican-American food with the quality and polish of a professionally run establishment. The staff don't clap and sing, but they do make a mean guacamole. 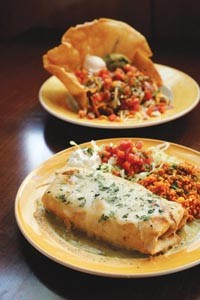