Amidst gloomy news about libraries, the North Side's new Carnegie Library is a bright spot. 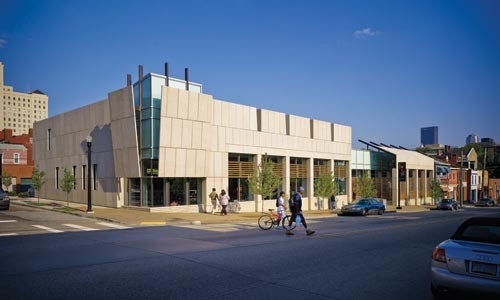 There is very little good news for libraries these days. Regardless of the increasing library usership during the Great Recession, the commonwealth of Pennsylvania is cutting library funding. Indeed the Pittsburgh Post-Gazette recently reported that financial support for libraries is down nationwide. Meanwhile, a recent academic study at the California College of the Arts imagined the "Atomized Library," which becomes smaller and smaller because it uses no books at all.

Could this be the disappearance of libraries as we know them?  The masonry pieces that fell from the old Carnegie Library, the original North Side structure, after a lightning strike seem positively quaint by comparison. The building type as a whole seems under attack.

By contrast, the opening this past August of the new Carnegie Library branch on Federal Street, in the North Side, is a beacon of good news in frequently stormy skies. Money for this new structure came from bonds issued in better times exclusively for capital expenditure, so it doesn't compromise the operational funds of the system as a whole.

While some had hoped to simply renovate the old building, that structure "has too many nooks and crannies to operate successfully as a modern library," explains Karen Loysen. Without even considering handicapped accessibility issues, the additional staff required to monitor all of its spaces make its continuing use cost prohibitive. Loysen would know. Her firm has completed successful renovations on Carnegie Library branches in Brookline and Woods Run. Its familiarity with the building type has led to a successful new structure on the North Side.

The Federal Street site, just up from North Avenue, improves markedly over the gas station formerly there and fits well among the traditional neighborhood shops and stores, the new chain restaurants across the street, and the new housing development up the hill. With all due credit to the dynamic Children's Museum and the New Hazlett Theater near the former site, the new location attracts more users and a broader audience from the busier location. "It's a catalyst for investments that people are making in the neighborhood," says architect Peter Kreuthmeier.

It also comes across as a balance of existing and anticipated urbanistic forces. The building is one fairly tall story. Its façade combines limestone skin, wooden rain screens and extensive glazing in a lucid balance of what might otherwise be contradictory forces. While the building's height and proportions harmonize subtly with the scale of nearby commercial structures, the limestone skin suggests an appropriate institutional gravitas. The stone is cut into relatively thin slices, which are made apparent to the viewer rather than disguised as solid blocks. Perhaps most importantly, windows allow plenty of light and the right variety of views to make connections to the street invigorating but not disturbing. "How do you reinforce the message of transparency and accessibility?" Kreuthmeier asks rhetorically.

Inside, users (why on earth call them customers, as the Carnegie Library does?) find lucid organization born of library experience. Loysen + Kreuthmeier's Woods Run library renovation seems to be reincarnated in slightly larger form. The information desk is at the center of the building. The main reading room has, front to back, magazines, bookstacks and administrative/archival rooms, with computer terminals also at the center. This space's central volume is characterized by a roof structure, essentially invisible from the street, that rises at an angle on elegant wooden beams to create clerestory windows at the top. Light and height here give a serene meditative quality to the entire space, though certain wry details of laminated woodgrain panels and exposed steel beams will bring smiles to the faces of architecture enthusiasts who look closely.

Across the way, in the children's section, a lower ceiling suits the intended audience, and a whole spectrum of design elements suggests that architecture can encourage and accommodate children without patronizing them. Clever conical skylights and round lighting fixtures express pleasure in their irregular placement. Among bookstacks and low tables, a lively palette of colorful furniture is, again, lively but not cutesy.

This building doesn't solve all of the financial challenges of the Carnegie Library system. It does, however, show definitively that even in the advancing Information Age, a library can bring people and information together in an artful addition to the city. This is a case study for why our libraries deserve more support than ever.