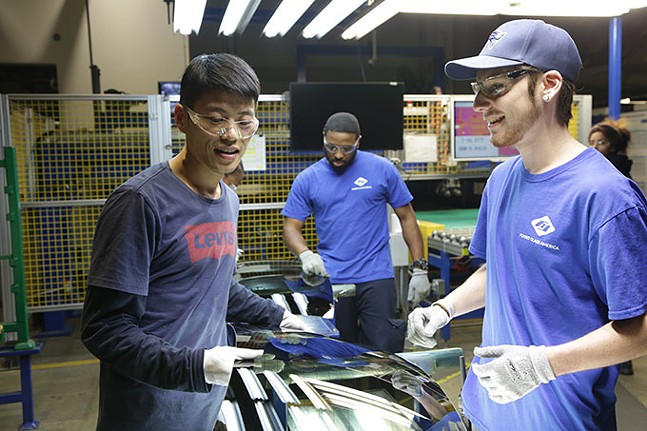 Aubrey Keith/Netflix
Chinese and American employees work together at Fuyao

As the possibility of another recession looms, Americans are reminded of what happened in 2008, when thousands of people lost their jobs, homes, and cars. American Factory, a Netflix documentary produced by Barack and Michelle Obama’s post-presidency production company, tackles those who lost their jobs making cars. The film follows the site of a former General Motors plant, and the laid-off employees who return there when it is bought by Chinese glass company Fuyao and transformed into Fuyao Glass America (FGA). While promising at first, the situation creates culture clashes that leave the future of the plant and its employees on shaky ground.

In 2016, Fuyao reopened a former GM plant outside of Dayton, Ohio, and hired hundreds of employees. Some had previously lost their jobs at GM, and others were workers and supervisors from factories in China. It all seems good and well at first, with Dayton workers thrilled to have jobs again, and the Chinese chairman of the factory, billionaire Cao Dewang, thrilled to be making money in America.

But then things start to shift. Workers who previously worked at GM are making half of the wages they used to. There are safety concerns, like cramped spaces and shattering glass.

Throughout the film, there are scenes of employee meetings at FGA, which are separated into groups of American employees and Chinese employees. Both sets of employees see the other as “the foreigner” and both have frustrations about the other’s work ethic. The Americans think the Chinese work too hard and too long and don’t take seriously the health and safety regulations in America. The Chinese workers think Americans don’t work hard enough. They listen to their Chinese supervisors explain in a factual manner that “everyone who grows up in the U.S. is overconfident” and “Americans love being flattered to death,” even as a large portrait of the chairman hangs in the FGA building.

When one Chinese supervisor asks if they can make the Americans do mandatory overtime and work weekends, the whole room laughs. They don’t understand why Americans can’t work as hard as the employees in the Chinese factory, who work longer days and weekends without complaining (the eight-hour workday is a standard created during the Industrial Revolution to prevent labor abuse). Looming over all of this is the fact that the factory adamantly tries to quash any talk of unions — at the factory’s opening ceremony, Ohio senator Sherrod Brown makes remarks that end with a pro-union sentiment. Afterward, an American supervisor says, “I’m gonna have to kill a senator.” (He is later fired and believes the union to be a good thing.)

When several of the American supervisors take a trip to see the Fuyao factory in China, they are met with open arms and an elaborate party that includes choreographed songs and dances about “intelligent and lean manufacturing” and “market response” that bring one American to tears. The headquarters is bright, jubilant, and passionate, compared to the dreariness of Dayton and its vacant-eyed employees. But, it turns out, contrary to the chairman’s proclamations, the factory workers in China are tired too. They work long hours and rarely see their kids. One worker says, “I’m tired but I have no choice.” In America, the Chinese workers are far from their families and share an apartment with several other workers.

American Factory’s strength lies in its ability to highlight the differences between American and Chinese work culture in insightful, bleak, and funny ways, simply by putting two contrasting scenes next to each other. It doesn’t feel like there’s the manipulative editing or overt editorializing often found in documentaries. Instead, the filmmakers — Ohio residents Julia Reichert and Steven Bognar — remain in gray space where is there is no single right answer. Both sides have beneficial approaches to labor, but neither is ideal for the workers. Then again, the crux of capitalism is that ideal conditions remain out of reach for most workers. At the end of the film, FGA is in the midst of replacing workers with automated machines, and the cycle continues.