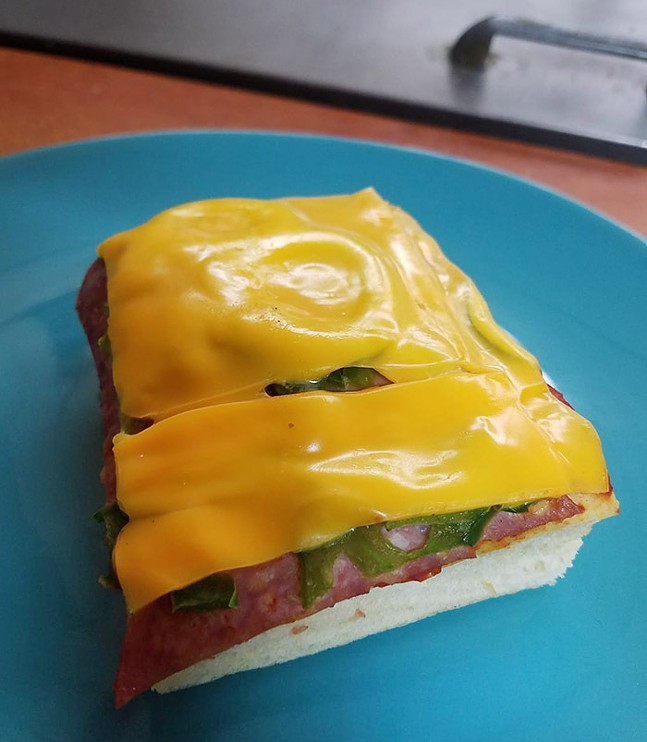 Photo: 29th Street Pizza Subs & More
Slice of Altoona Hotel Pizza from 29th Street Pizza Subs & More
Pennsylvania is home to a lot of obscure and unique styles of pizza. Philadelphia has tomato pie, Northeastern Pa. has Old Forge Pizza, and Beaver County has Ohio Valley Pizza. They don’t get a lot of play outside of their respective regions, but they are acknowledged. Many Pennsylvanians can, at the very least, name and identify them.

But the commonwealth is truly a land of culinary mysteries, and for what feels like the first time ever, another, even more obscure pizza style is being documented: Altoona Hotel Pizza.

The profile of the pie was raised yesterday thanks to a viral tweet showing a photo of three square slices with yellow cheese next to a sign reading "Altoona style."

People on social media were skeptical about its legitimacy and even people claiming to have grown up near Altoona said they had never heard of this.


i spent two years at penn state altoona and at no point do i recall hearing the phrase “altoona style pizza" pic.twitter.com/kjVZtJVktW

But Pittsburgh City Paper spoke to one Altoona restaurant owner, another Altoona native, and sourced a few Central Pa. restaurant menus, and can assure readers that Altoona Hotel Pizza is real.

Steve Corklic is the owner of 29th Street Pizza Subs & More in the Mansion Park neighborhood of Altoona. His restaurant serves Altoona Hotel Pizza by the slice and he is extremely proud of it.

“It is a legendary pizza, even if you are not from Altoona,” says Corklic. “And I think no one does it better than us.”

Corklic says the pizza style originated at the Altoona Hotel sometime in the 1960s or ‘70s. It is composed of Sicilian-style dough and cut into squares. On top of the dough is a layer of sweet tomato sauce, then some deli-style salami, then a sliced green bell pepper ring, and then topped with yellow cheese. The cheese was at one time Velveeta brand, but Corklic’s pies use yellow American cheese instead.

The style originated from the Altoona Hotel, which was destroyed by a fire in 2013. Since then, however, about a dozen local restaurants have started serving Altoona-style pies. For example, Zach’s Sports Bar off Route 764 offers an “Altoona’s Favorite” pizza on its menu, which is described as Sicilian crust, marinara sauce, American cheese, salami, and green peppers. CO"BRH"s ll restaurant on 6th Avenue also serves the yellow-cheese style pizza.

Corklic says that before the fire, Altoona Hotel was getting pretty busy with people ordering the yellow-cheese pizza. “That was a good inkling that people liked it,” he says.

He started selling the style at his old restaurant, 19th Street Pizza Subs & More, and continued at his current place on 29th Street. Corklic says some days he goes through 5-10 trays of Altoona-style pizzas.

Photo: 29th Street Pizza Subs & More
Altoona-style pizza with extra toppings
Even so, he acknowledges it’s not a universal love for the unique pizza style. Corklic believes the majority of people in town enjoy it, and he does too, but that wasn’t always the case. When he was young, he was turned off by the yellow cheese on the pizza.

John Berry grew up just outside of Altoona and lives in Pittsburgh’s Point Breeze neighborhood today with his wife and two kids. He remembers eating the unique pizza at the Altoona Hotel as a high school student in the 1990s.

“The pizza was kind of a local legend, renowned for its weirdness, and since we were pretty much always driving around, bored, we would sometimes stop there just to switch things up,” says Berry. “I don't remember liking the pizza very much, but since I remember eating it on multiple occasions, it couldn't have been that bad.”

“The bell pepper ring was pretty weird though,” says Berry.

It’s unclear exactly what led to the creation of the first Altoona-style pizza, since CP could only locate a few mentions of the pizza online (even several searches on the Altoona Mirror website only brought up only passing mentions), but Berry speculates that it was probably “somebody's grandma making off-brand pizza however the hell she wanted and accidentally creating something totally unique and fairly memorable.”

“It is a great example of the Altoona that I remember,” says Berry. “Not good, but memorable. ... That's my experience of Altoona in a nutshell I guess.”

Corklic is more bullish on the Altoona-style, however. He says as he got older, he enjoyed the combo of American cheese and Sicilian dough more. And he notes that sometimes people will order bulk quantities to take across the state, so that Altoonans can have a little taste of home.

In the end, Corklick says people are going to have to try it for themselves before they judge it.

“If you know somebody in the pizza world that wants to try something different, then come try it,” says Corklic. “We do it the best.”