It's accepted that dining on Grandview Avenue comes at a premium price: It is, after all, a premium view. For a long time that meant either stuffy, old-school surf-and-turf or frankly mediocre fare that was clearly not, nor meant to be, the main event. But in recent years, Pittsburgh's culinary awakening has touched the heights of Mount Washington, combining that famous view at last with exciting, modern cuisine.

In this spirit, Altius opened last year to considerable local buzz. Its sleekly modern, two-level dining room clearly defines its style as current. Prices are as high as its exalted perch atop the mount, but as the best restaurants understand, special food should come with a sense of occasion, and that includes what happens inside the dining room as well as the view outside. Altius delivers with an array of professional servers bestowing attention without hovering or getting too familiar.

In the kitchen is Chef Jessica Bauer, also of the excellent Bistro 19 in Mount Lebanon. The menu's description of "elevated cuisine" seems to combine a couple of contemporary trends: fairly traditional dishes, provenance noted (Skuna Bay salmon, Bershire pork chop), and what we can only describe as a '90s tendency toward unexpected fusions (short rib braised in Mexican chocolate), with ingredients that read like grocery lists (lamb rack with chestnut purée, lingonberry compote, root vegetable comfit and truffled Madeira jus). 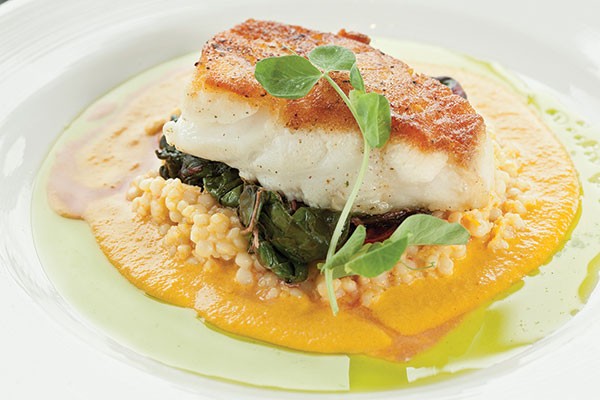 What might be a ponderous approach is lightened by bits of whimsy, such as the "Tongue n' Cheek" and "Duck, Duck, Goose." We also received little "gifts" from the kitchen, including a metal cone of popcorn (flavored with sundried tomato, quite tasty), an amuse bouche (chestnut puree on a tiny, edible cracker-spoon) and a goodie bag containing a two-bite dessert (a blondie-like bar with macadamia and chocolate). It was all almost charming enough to justify the $36 average price for an entrée.

The aforementioned Tongue n' Cheek appetizer was strenuously complex: a slice of beef tongue, slow-cooked for tenderness and then crisped at the edges; topped with little beef-cheek pierogi, on a bed of leek and mushroom; and sauced with veal demi-glace and a token dollop of horseradish crème fraîche. The tongue had a bit of the earthy taste and texture of patê, and was well countered by the rich and slightly sweet dumplings and sauce, but it didn't quite achieve balance. Had the horseradish been in evidence, its bite would have added welcome top notes. It was hard to say whether this dish was too much, or not enough.

A nightly special of tilefish topped with shrimp — served with head and tail on — offered promising components: the thick, white filet deeply browned to form a crust on top, the shrimp intensely flavored, if not quite succulent. But, despite several other components, including a lobster roe cream poured on at tableside, it failed to equal, let alone exceed, the sum of its many parts.

This proved to be a theme. The Duck, Duck, Goose consisted of seared breast, confit leg and whipped pâté, respectively, plus challah crostini, huckleberry duck jus, polenta and kale. Even when it was possible to assemble a bite including each of these ingredients at once, the combination failed to sing. It seemed the faintly gamy leg was supposed to contrast with the sweet huckleberry jus, but with so many other components, the effect was muddled.

Pear, walnut and gorgonzola ravioli, topped with balsamic cream, Swiss chard, wild mushrooms and diced butternut squash had a more uniform autumnal theme that enabled the ingredients to work together, rather than compete, to build a woodsy flavor profile.

The salmon was the most straightforward dish we ordered, and possibly the most successful. The seeds and salt of the "everything bagel" crust added depth and savor to the rosy, juicy salmon, and fluffy Carolina gold rice was a satisfying accompaniment. A fennel-and-orange salad brightened the plate with its citrus sweetness, and sundried-tomato cream added further notes of both richness and acidity.

Altius has reached for the sky with some of the most complex and original recipes we've seen. But while individual components of our dishes could be exquisite, they tended to confound as they compounded. We expected "elevated cuisine," at corresponding prices, to be closer to sublime.