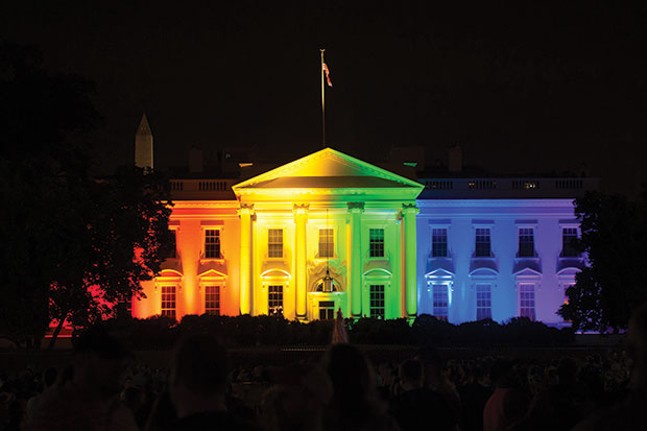 Last year the White House was a little more festive during Pride Month.

Someone recently took issue with all of the “negative” things that I write about President Donald Trump. They told me that I need to be “less critical” and “fall in line” with the way things are in this country now. And that if I were a “patriotic American,” I would instead “roll up my sleeves” and do something constructive to help make this nation this “great” again.

So I mulled it over for a while; really let it soak in my gray matter. Maybe I was being too negative and, instead, needed to be more helpful. I really put on my thinking cap and thought really hard about which nitwittery that flies out of Trump’s mouth I despise the most. It’s hard to narrow it down to one thing when the man spits out more shit than a bulldog on a steady diet of vodka-soaked Raisin Bran.

From immigration to the environment, Trump is on the wrong side of history on most things and doesn’t seem to care. In fact, all he seems to care about is having an “enemy” that he can blame for all of his problems and tweet about it at 6 a.m. In recent days, maybe because it’s June and Pride festivities are on tap for cities all over the country, he seems to be doing everything he can to piss off the LGBTQ community.

It’s not a new thing. Despite Trump claiming during his campaign that he’s a friend of LGBTQ Americans, he’s shown consistently that he’s anything but. He rolled back President Obama’s guidance allowing students to use the bathroom to match their identified gender. The Census Bureau announced it will not be asking questions about sexual orientation or gender identity. There was also a recent blowup when the Department of Health and Human Services decided to eliminate questions from its survey of older Americans that allowed them to identify as LGBTQ individuals. And earlier this month, he refused to release a proclamation honoring LGBTQ Pride month. He’s also surrounded himself with an anti-gay attorney general in Jeff Sessions, and Vice President Mike Pence believes in open discrimination against LGBTQ individuals and is a staunch proponent of “praying the gay away” through conversion therapy.

But rather than calling the president a “hate-mongering prick,” I want to help him find a way to change course on these issues. So what’s my solution to help Trump halt his hateful behavior toward members of the LGBTQ community? Give him someone else to hate. Now, I’m not a fan of hatred myself (go ahead and laugh), but that seems to be what Trump needs. So here are a couple targets that actually deserve the President’s venom and covfefe.

Reports began surfacing in recent months that this Russian republic was stepping up its persecution of gay men by detaining them in “concentration camps,” torturing them and murdering them. Chechnya says it obviously isn’t doing this, because there are no gays in the republic. While an anti-LGBTQ stalwart like Mike Pence would love to believe that a land without gays actually exists, the rest of us know BS when we see it. Actively opposing this disgusting behavior should be a no-brainer, but so far the Trump administration has gone the other way. Last month, the U.S. denied visas to gay refugees seeking an escape from the violence.

In a way, Donald Trump is worse for LGBTQ Americans than even the staunchest opponents of granting equality to gay Americans. We know where Pence stands on these issues, but Trump is still pretending that he’s a friend to the LGBTQ community. During his campaign, he was pretty good at the charade. He talked about protecting LGBTQ rights and fighting for equality. He even awkwardly held up a rainbow flag at a campaign event last fall. Most on the left never believed he would be a pro-LGBTQ leader, and he’s proven that the concern was warranted. Donald Trump loves to hate groups of people — gays, Mexicans, Muslims, refugees. But if he really wants to hate someone who’s bad for this country, all he needs to do is look in the mirror.