The company has been making a name for itself working with artists from Imagine Dragons to Snoop Dogg. 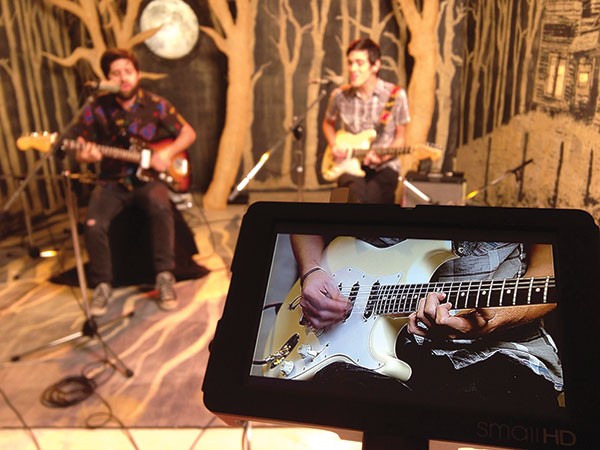 There are a few requisite stops for touring musicians coming through Pittsburgh. Many go to Jerry's for record-shopping, and plenty stop at Primanti's or Pamela's to get some of the notable local cuisine. But lately there's a new side trip that's gotten popular, albeit by invite only: the Altar TV studios on the North Side.

Altar TV began in 2011 as a marketing tool for Altar Bar, the Strip District venue. But it's since taken on a life of its own, and is no longer associated with Altar Bar (aside from a common investor). In January of this year, the company — headed up by Alex Drizos and Alex Mohler — moved to its new North Side digs, right near PNC Park. It has a full-time staff of six (including occasional CP contributor Alex Gordon), having bought Quanti Studios, a company started by Art Institute grads, and hired its employees. And it's been making a name for itself working with artists from Imagine Dragons to Snoop Dogg.

The Altar TV platform is like an online network. Within the larger Altar TV brand, there are numerous series, like Live at the Show (which is just what it sounds like — footage from local venues) and Studio Diaries (which follows bands through their entire recording process). All of the content is online and in HD, and it's all free. (The company is "still in the startup stage," says Drizos, meaning it's funded by investors; there's currently no revenue strategy based on fees or ads.)

The majority of the acts that Altar TV works with are national-level bands, whom Mohler books through contacts developed during his years in PR. But the site also features a number of locals, from Anti-Flag to Lovebettie and Adventures. Most of the site's content is focused on punk and indie-rock bands, though everything from pop to hip hop is covered.

Most Altar TV staffers have been in bands before. (Drizos and Mohler, originally from the outskirts of town, moved to the West Coast with their old band Isadora and stayed there for a few years before returning to Pittsburgh.) That's one of the things that sets Altar TV apart, in their eyes.

"We wanted the interviews to be set up so they're not like a press interview," says Drizos. "We've been in bands, we've been on tour, we want to just have conversations with the artists."

Drizos hints that Altar TV has been approached by TV networks about airing some of its shows, but for now, "the Internet is our medium," he says. And by mixing videos of up-and-coming Pittsburgh acts with segments on big names like Hot Water Music and Christina Perri, Altar TV is helping put Pittsburgh artists on the radar globally.