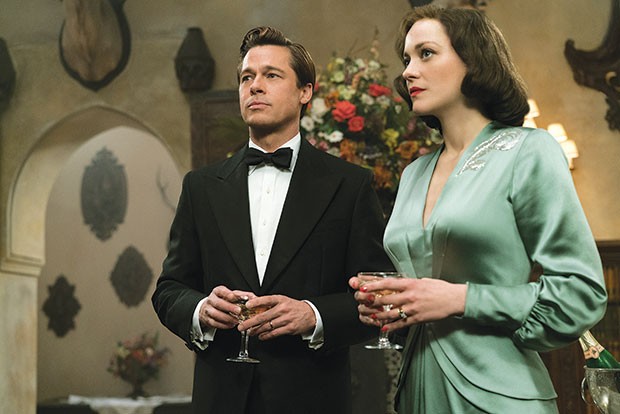 Spy with me: Brad Pitt and Marion Cotillard
In 1942 Morocco, Max Vatan (Brad Pitt), a Canadian operative working for the British Army, is assigned to play husband to Marianne Beausejour (Marion Cotillard), a member of the French resistance infiltrating Nazi society in Casablanca. Naturally, the two fall in love, and eventually move to Britain, where they marry and continue to fight the Axis powers.

Though updated with a few curse words and a bare backside, Robert Zemeckis’ drama Allied is a very old-fashioned feature. Man and woman meet during war time, but the very thing that drew them together — fighting for the same side — threatens to tear them apart. Along the way, it’s classic melodrama: sweet nothings whispered at sunrise, a daring mission or two, a pretty baby, the unforeseen costs of war. (Says a wiser fellow: “Marriages made in the field never work.”)

It’s the sort of movie where a sandstorm is a lifestyle feature, the perfect dramatic backdrop for a romantic moment. And truly, the clothes in this film are gorgeous — somehow these two elude the wartime restrictions that kept everybody else in shabby tweeds. The satiny lingerie looks fresh out of the box, and their spy budget includes a lot of perfectly tailored formalwear.

The middle part of this film is the best, when Vatan is told that Beausejour might be a Nazi collaborator, and he is forced to weigh this possibility against his emotional and professional lives. He so admired Beausejour’s facility with subterfuge in Casablanca, where she had explained her skill: “I keep the emotions real — that’s why it works.” Is he dangling from the same rope? But the film resolves in a clunky and highly melodramatic fashion that robs the work of its more intriguing shadowy side.

In English, and some French, with subtitles