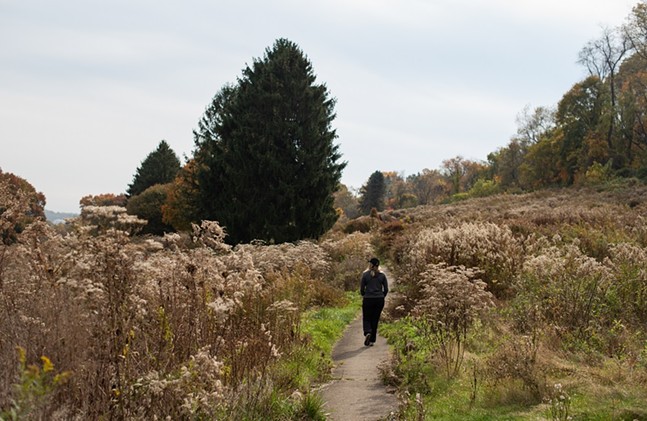 Photo: Lindsay Dill
A person walks a trail through the former Churchill Valley Country Club
An area nonprofit is closer to converting the grounds of an abandoned country club in eastern Allegheny County into a communal green space thanks to a massive grant.

The PA Department of Conservation and Natural Resources recently awarded a $1 million grant to The Allegheny Land Trust to acquire the former Churchill Valley Country Club and golf course located between Churchill and Penn Hills. The funds will help ALT preserve the 148-acre property, which includes meadows, woodlands, and paved trails, for recreational and conservation use.

Closed in 2013, the Churchill Valley Country Club had, for over eight decades, been a golf destination and events venue.

A press release says the group plans to use the land to create Churchill Valley Greenway, a new protected green space that would provide “equitable, convenient and permanent access to the restorative benefits of nature to the 95,000 people who live within a 3-mile radius and to all residents of Southwestern Pennsylvania.”

“It would be impossible to overstate the importance of this most recent grant award from DCNR,” said ALT’s president and CEO Chris Beichner. He also expressed appreciation for the “elected officials that helped to make it happen,” among them state Sen. Jay Costa (D-Forest Hills) and state Rep. Summer Lee (D-Swissvale).

“I am happy to help move this project forward and very pleased that DCNR was able to provide this level of support,” says Costa. Lee says “The protection of the Churchill Valley Greenway will improve the quality of life in our communities and I’m excited to support its progress.” 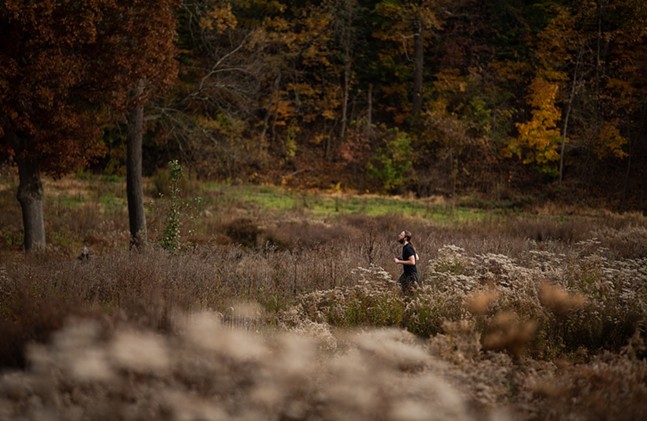 Photo: Lindsay Dill
A runner on the grounds of the former Churchill Valley Country Club
ALT obtained an exclusive contract to the land in 2019, with the agreement contingent on the group's ability to raise the $3 million necessary to purchase the land by March 2021. So far, ALT says it has raised about $2.2 million of that amount.

In addition to the DCNR grant, the group also received $300,000 in private grant funding, as well as individual donations from community members eager to see the space turned into a public resource. In September, the Pittsburgh Post-Gazette reported that residents called on ALT to save the land from being developed by Zokaites Properties, which had purchased the land in 2014. The project is also endorsed by the Churchill Borough Council and a wide range of community groups and civic organizations.

ALT plans to work with corporate sponsors and other funders in an attempt to close the $800,000 gap by the deadline.

ALT states that places like the Churchill Valley Greenway have become more essential than ever in the wake of the pandemic, as those wary of indoor gathering places have turned to parks, trails, and other outdoor spots as a way to safely unwind.

“The proposed greenway, like other parks and trails, has experienced a dramatic increase in visitors in recent months as people flock in record numbers to exercise, find solace in nature or simply to get some fresh air while practicing safe social distancing,” ALT says in a press release.

Those interested in supporting the conservation project can choose “Churchill Valley Greenway Project” on ALT’s online donation form at  alleghenylandtrust.org/donate.