“We want to make sure that these guys are not eaten, but are eating.”

It’s a Tuesday morning in Crafton Heights. Behind a fence on Crafton Boulevard are eight goats, one man and one miniature donkey. The man, Gavin Deming, wears a blue cap adorned with the image of a goat biting down on a baseball bat. It’s Chompers, the mascot of the Double-A minor-league baseball team the Hartford Yard Goats.

Deming’s own herd of goats is also made up of distinct characters: Cowboy is the wild one; Wimpy is certainly not as shy as his name suggests; and Hobo, the miniature donkey, serves as the goats’ protector.

Deming is the founder and director of Allegheny GoatScape. And he’s on a mission to clean up the overgrown lots of Pittsburgh with the help of his herd of landscapers.

“Generally, goats are just a very friendly, docile animal,” says Deming, whose herd includes nine goats. “As castrated males, they have no other function really except for to be eaten or to eat. We want to make sure that these guys are not eaten, but are eating.”

Using goats to clear overgrown and invasive vegetation is a growing trend in urban environments. Goats have gone to work in places like Detroit, Washington, D.C., and Brooklyn. You can even use Amazon to hire a herd near you.

But it’s hard to tell what is behind the growth of the goat landscaping industry. Is it about the spectacle and cute-factor of farm animals in urban environments, or an interest in environmentally friendly practices? Are people in it for the petting zoo or the planet?

For Deming, it’s about a desire to help the environment and create community spaces.

“Long ago, a friend of mine and I talked about the idea of walking a herd of goats throughout the North Side and letting them eat all the vacant overgrown lots, so that they could turn into community gardens and things like that,” he says.

The industry was first launched in Pittsburgh in 2015 after the City of Pittsburgh updated the urban agriculture zoning code, allowing residents to keep chickens, bees and goats as long as they had an appropriate amount of land. That year, Deming saw his dream of goats in the city come true when the Steel City Grazers established Pittsburgh’s first goat-grazing company.

Deming got involved with the organization when the Western Pennsylvania Conservancy, where he works as a community specialist, worked with Steel City Grazers on a project in Oakland in 2015.

“I was so impressed with how efficient the goats were and with how well they did removing the foliage and the vegetation,” says Deming, who works with the Conservancy’s Community Gardens and Greenspace Program. “Our staff was able to come through right after that and whack down whatever they didn’t eat, and we were able to plant trees immediately. So with a little of the follow-up management, we turned a pretty densely invasive space into a welcoming corridor of Pittsburgh.”

In January 2017, he officially formed Allegheny GoatScape as a 501(c)3 nonprofit organization. “The reason I turned it into a nonprofit rather than a for-profit corporation is because I want to be sure that these guys can be on public property,” Deming says. “The resources are often scarce for public projects. I want to be able to raise money through grants and fundraising, so that we can get them in public spaces like our parks.”

And the public has been embracing Deming and his herd with open arms ever since. In May, Allegheny GoatScape launched a “Goats on the Go” campaign on In Our Backyards, a crowdfunding website focused on connecting communities to local projects in need of funds. Seventy-eight people donated to the campaign, raising $5,335 — which exceeded the goal by $150 — so that Allegheny GoatScape could purchase a trailer to transport the animals.

Even Pittsburgh Mayor Bill Peduto has voiced his support for the use of goat landscaping in Pittsburgh. “When I met him at Earth Day in Frick Park, he said, ‘I certainly hope you guys continue to come into our city parks,’” Deming says. “He’s seen it work, and it’s not coming from the city’s dime; it’s coming from wonderful advocates like Tree Pittsburgh and other groups that have gotten the goats on city property.”

In fact, Allegheny GoatScape is getting ready to undertake its biggest project yet in South Side Park, thanks to a $10,000 grant awarded to the Friends of South Side Park from the Allegheny County Conservation District. The goats will tackle a six-acre section of the 65-acre park that was nicknamed “Jurassic Valley” by locals due to the thick vines and vegetation that make it inaccessible.

Once the goats have cleaned up the grounds, volunteers, along with Pittsburgh’s Student Conservation Association, will follow up by planting trees. On July 8, Friends of South Side Park is holding “Goat Fest,” at the Bandi Schaum Community Garden, to celebrate the goats’ work and to give the public the chance to meet the herd.

Other local sites the Allegheny GoatScape herd has tended include Garfield Community Farm and a lot owned by the First United Presbyterian Church of Crafton Heights. “Our church owns a hillside that is a challenge, to say the least, to traditional landscape management. Our current lawn service refused the business, because he thought it would be too tough on his machinery or too risky to his employees,” says Pastor Dave Carver. “The environmental factor was huge, too. We’ve been trying to be greener and greener, and this seemed like an attractive option.”

Goats are popularly known for consuming anything that’s put in front of them, making them the ideal weed-eaters. Though they’re sometimes called “mowers,” this isn’t technically true. Animals like sheep are grazers, meaning they eat low vegetation like grass, but goats are browsers.

“They get pretty creative with how they look for food. If it’s easy and at their face level, that’s their favorite, but if they want leaves, they’ll climb as high as they can get and reach for it and pull down,” says Deming. 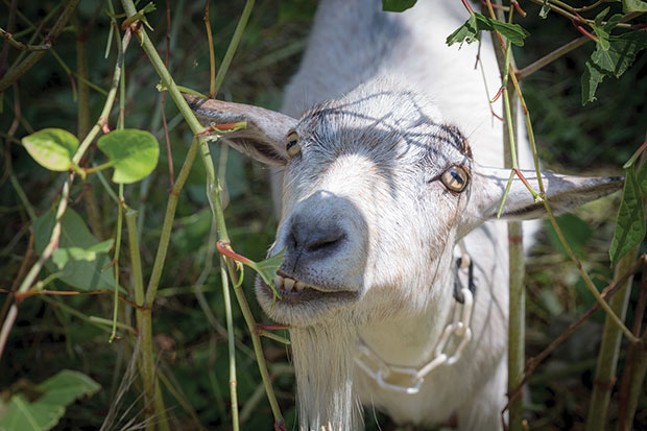 Many of the plants the goats eat are invasive species like Japanese knotweed, which is known to damage structures and kill other native plants. “The nice thing about this whole venture, bringing them to eat unwanted plants, is that they like most of the plants in here,” Deming says gesturing to the lot in Crafton Heights. “Goats are similar to humans in that they have tastes, so some things they like more than others. We’re very grateful that one of their favorites is the knotweed.”

It is important to remember, however, that the goats aren’t taking the plants out at the root; they’re weakening it by eating what’s above the ground. “To really remove it in full, there needs to be a management plan in place, so that somebody is gonna cut it down when it comes back up or dig it out,” says Deming. “This is really just the first broad brush that allows a neighborhood or the owner to see what can happen with the space.”

Goatscaping is an environmentally friendly alternative to more traditional landscaping techniques that use harmful chemical herbicides or fuel-powered machinery. The only fuel the goats require is the plants they eat, and they even leave behind some natural fertilizer in the process.

In addition to the environmental benefits, cost is a major reason why people are choosing goats over traditional landscapers. That can cost a few thousand dollars after paying for labor, machinery and chemicals, whereas a herd of goats is much cheaper. Allegheny GoatScape charges a setup fee which is dependent upon the challenges of the particular space, after which the cost to have the herd there is only about a hundred dollars a day.

“When I hear people talk about how much things cost, they’re shocked at how cheap this can be,” Deming says.

Ultimately, it’s the affordability of goatscaping that could make it more sustainable than other environmental practices, which sometimes cost more than their environmentally harmful counterparts. And the cute-factor of having goats on your property doesn’t hurt either.