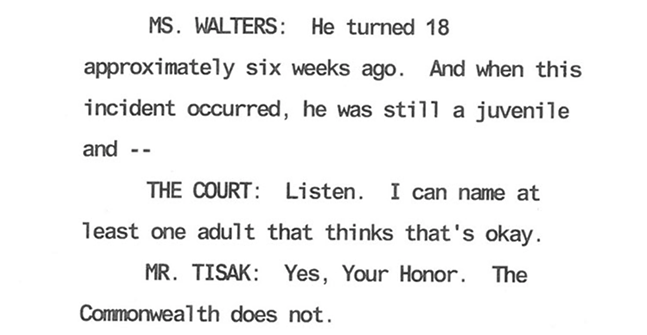 Read the full court transcript here.
An Allegheny County Common Pleas Court judge with a history of making controversial comments is coming under fire once again; this time for levying a $6 fine — $1 for each time the defendant inappropriately touched his 15-year-old victim.

Allegheny County Common Pleas Court Senior Judge Lester Nauhaus passed the sentence April 26 during a summary appeals hearing in his courtroom. The defendant had been previously convicted by a district magistrate on a harassment charge — although some victim-rights advocates tell City Paper that the conduct in this case is sexual assault — that and, by law, had the right to one appeal. But now, Nauhaus might be the one facing a judicial panel because a spokesperson for District Attorney Stephen Zappala says the judge’s actions could lead to the filing of an official complaint with the Judicial Conduct Board of Pennsylvania.

The incident that led to the original charges occurred last fall at a local high school. The victim’s mother tells City Paper that her daughter, age 15 at the time, was walking down the hallway at her school when the defendant, who was 17, grabbed the girl’s crotch. She pushed him away and he did it again. The victim then pushed the defendant into a row of lockers, and the confrontation was broken up by a teacher. A source with knowledge of the case tells CP that the female student “aggressively defended herself.”

The teacher brought the victim to school officials and the incident was reported to a police officer assigned to the school. The 15-year-old told her mother and the officer that the defendant had touched her several times in the past, but this was the first time she reported it. The male student, a football player, was suspended from school for three days and prohibited from playing in one football game, the victim’s mother said. The officer urged the victim and her family to press charges, which they did.

The defendant, now represented by a guardian ad litem assigned through Kids Voice, a child-advocacy group that represents juveniles going through the child-welfare system, appealed the fine. That hearing took place April 26. According to a court transcript, the defendant’s representative, Dawn Walter, said her client couldn’t pay the $300 because he is a “foster child in the juvenile system.” Walter asked for community service in lieu of the fine.

According to the transcript, Assistant District Attorney Jeff Tisak asked for 90-days probation and a no-contact order to ensure that the defendant stayed away from the victim.

Nauhaus then asked the victim for more information about the incident.

“How many times did he touch?” Nauhaus asked the 16-year-old girl in open court.

“Your honor, we want the 90-days probation,” Tisak replied. “It is just highly inappropriate to tell a young girl that inappropriately touching is worth a dollar a time.”

Nauhaus reiterated that the defendant wouldn’t be able to pay a fine. Tisak told Nauhaus, “that’s not the point,” to which the judge replied: “Of course, it’s the point.” Tisak again tried to tell Nauhaus that his comments were inappropriate. The judge cut him off and ordered no fine, with community service and the 90-day postponement. At the end of the hearing, Nauhaus said, “I feel bad for the victim, I really do. But there really isn’t much I can do.”

Mike Manko, spokesperson for District Attorney Zappala, told CP in an emailed statement that Zappala would be reporting the matter to the Judicial Conduct Board of Pennsylvania, and that this is not the first time that Nauhaus’ demeanor toward crime victims has been questioned. 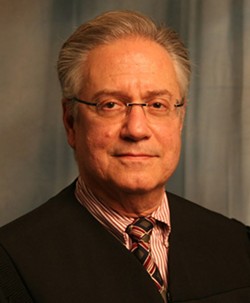 Allegheny County Common Pleas Court Senior Judge Lester Nauhaus
“At the start of his tenure, District Attorney Zappala, working with the members of the victims’ policy board, made drastic changes to the way our office responds to PFAs [Protection From Abuse orders] and deals with domestic-violence cases,” Manko wrote. “In effectuating these changes, we dealt with the same type of conduct then as is being exhibited by this particular jurist now.

“Such conduct has no place in our system, and the District Attorney will bring it to the attention of the appropriate persons and, if necessary, the Judicial Conduct Board.”

Asked about the judge’s actions in the courtroom, Alison Hall, executive director of Pittsburgh Action Against Rape, says, “It’s very discouraging for somebody from the bench to speak to victims in this way.”

Hall says Nauhaus had a chance to make a difference in this case by respecting the victim’s situation, and “providing the offender with potential intervention to stop these dangerous behaviors from escalating into felonies.”

According to the hearing transcript, the defendant had been in the foster system for some time, and the DA’s office wasn’t seeking an excessive penalty. Even the defendant’s representative admitted that her client “acknowledges what he did on this particular incident was incorrect” and, as Nauhaus says, “at the end of the day, all you want is for me to be merciful, right?”

The American Judges Association is an organization whose goal, according to its website, is to “improve the effective administration of justice” and provide continuing education for members of the judiciary and the general public.

Minneapolis trial Judge Kevin Burke is the treasurer of the AJA and while he is not referring to this particular case he tells CP: that generally: “You do have to be concerned when the victim is a child, particularly. When you’re dealing with a child, that the language you use as a judge, and the messages that you send are really very, very critically important. When you’re dealing in areas of bullying or sexual harassment or worse, [the judge] needs to send a message [that the judge] will take complaints seriously.

“When you’re not careful about what you say and what you do, you can send messages that will undermine the public’s trust, confidence and respect for the justice system.”

Sue Frietsche, a staff attorney at the Women’s Law Project, agrees: “The fine Judge Nauhaus imposed sends the message that sexual assault is a trivial thing, and that justice is served if an offender is charged a dollar a touch. The judge never should have done that and owed that young woman more respectful and compassionate treatment.”

This isn’t the first time Nauhaus has come under fire for his decorum, or lack thereof, on the bench. In its March 29 issue, CP reported on Nauhaus’ handling of a harassment case filed by a local business owner. In that case, Nauhaus dismissed the harassment charge, saying the verbal harassment wasn’t that bad because “I have a president who talks worse than that.”

In this recent case, it appears as though Nauhaus might have once again brought President Donald Trump into a case. “Listen,” Nauhaus said from the bench regarding the touching, “I can name at least one adult that thinks that’s OK.” Tisak responded, “Yes, your honor. The Commonwealth does not.” Nauhaus then said: “I understand that. He’s an important guy.”

At age 73, Nauhaus is officially retired. However, when he turned 70, he was approved for senior status by the state court administrator. Senior status allows retired judges to continue to serve the Commonwealth if there is a need.