By Ryan Deto and Ollie Gratzinger 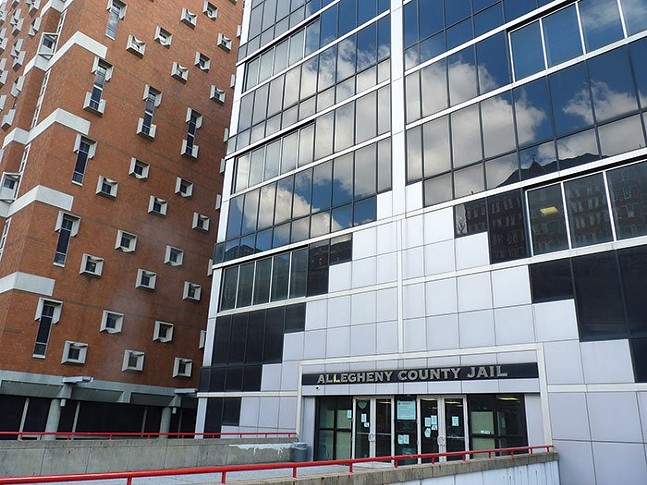 According to a joint statement, 189 inmate releases have been sent to the jail. Not all of them are limited to those with health problems, but inmates with health issues are being considered for release first. The Public Defender’s Office is also working to identify all non-violent inmates held only on cash bails.

Inmates released are ensured a free phone call, free bus ticket, free Narcan, and a packet of information on community resources. The release project is an ongoing collaborative effort.

Bret Grote, of the local criminal-justice group Abolitionist Law Center, commends the effort but wonders how far it will go.

His group, along with the American Civil Liberties Union of Pennsylvania (ACLU) and the Three Rivers Free Clinic for the People, is calling on a larger release of inmates from the Allegheny County Jail. He said the vast majority of inmates are being held there for nuisance and non-violent offenses, and most haven’t been convicted. He says 75-80% of inmates are not serving a sentence and many are there because of charges related to a probation violation. Pennsylvania has some of the strictest probation laws in the country.

“Almost all the people in the jail are going to be released from the jail this year anyway,” says Grote. “People are constantly cycling in and out. Jails are a public health crisis in non-pandemic times, but in this given moment, I think we can focus on public health.”

In the wake of the coronavirus (COVID-19) pandemic, advocates across Pennsylvania have been calling on jails to release medically vulnerable inmates, and for transparency in their responses to the outbreak. The coalition of advocacy groups has created a Facebook event scheduled for March 20 that encourages participants to call county leaders and pressure them to take action.

During a March 20 conference call, the coalition of groups laid out a plan to lower the jail’s population to safer levels giving the coronavirus outbreak. Grote called on “all those who have a role keeping people in jail to release people,” and said the jail population needs to be reduced rapidly to avoid a likely spread of coronavirus. He added that eventually a spread could move on to the family members of jail workers and inmates, especially because of the close quarters that inmates are kept in at the jail.

Sara Rose of the ACLU of PA said Allegheny County’s courts, police departments, and the office of District Attorney Stephen Zappala all have a role in reducing the jail's population. Rose said that courts should eliminate the use of cash-bail during the coronavirus pandemic and that hundreds, and sometimes close to 1,000 people, are held in the Allegheny County Jail because they can’t afford their cash bail.

She said all police departments in Allegheny County should stop arresting people for non-violent offenses, and instead issue summons for those charges. Rose said 100 people a day are going into the jail, which is extremely concerning considering the growing number of positive coronavirus cases in the region.

“We should follow the leads of places like Clevaland,” said Rose, which has lowered its population by more than 500 inmates recently.

Allegheny County Controller Chelsa Wagner (D-Point Breeze) said safety is the most important concern in terms of lowering the jail's population and potentially stopping the spread of coronavirus. But she also noted there are financial reasons to lower the jail population.

“The jail costs county taxpayers more than $91 million ever year, and that figure has been increasing,” said Wagner. “If we have to take on the costs of health care of any number of inmates [who get infected by COVID-19], we don't want to think about what that will be.”

Allegheny County Councilors Liv Bennett (D-North Side) and Bethany Hallam (D-Ross) announced on the call that they will be introducing emergency legislation on March 24 that would mandate that the ACJ and alternative housing facilities for recent inmates immediately reduce their populations.

Hallam said the legislation would require the release of those allegedly violating probation and those charged with or allegedly committed misdemeanors and non-violent offenses.

Hallam said the goal isn't reducing the jail’s population to a specific number, but added that anybody who is not constitutionally mandated to be kept in jail, like violent offenders, needs to be released.

She noted that Allegheny County Executive Rich Fitzgerald has already voiced support for dramatically lowering the jail’s population, long before the outbreak of coronavirus. The coalition of advocates and elected officials is calling on Fitzgerald to support those population-lowering efforts now, as they say those efforts are especially needed to stem the spread of COVID-19

“Why are we wasting taxpayer resources on keeping people in the jail that don’t need to be there?” said Hallam.

The campaign is called “Release People from ACJ [Allegheny County Jail] to Protect Public Health,” and the groups are asking participants to call Allegheny County Executive Rich Fitzgerald to urge him to “use his emergency powers to issue an ordinance mandating dramatic reduction of ACJ’s population” and to “emphasize that he is responsible for taking all necessary measures to protect public health and has the power and responsibility to keep people out of jail so it does not spark a public health catastrophe.”

One of their demands is to release at least 75% of the jail's population to protect public health. Some jails across the country are releasing inmates to stem the spread of coronavirus, including those in New York, Los Angeles, and Cleveland. Rikers Island prison in New York City recently had an inmate and guard test positive for coronavirus.

Allegheny County has identified 18 positive cases of coronavirus to date, and officials say they expect those numbers to grow as more testing becomes available.

The event’s organizers urge callers to be respectful and understanding, and encourage the county executive and his staff to “work with other officials for the greater good.”

Organizers are recommending the release of the following groups: Those alleged to have committed technical probation violations; those alleged to have violated probation by committing a misdemeanor and/or non-violent offense; anybody incarcerated on monetary bail; those with less than six months to serve on their sentence; anybody charged with a misdemeanor; anybody charged with drug possession, sex work or other nonviolent offenses; all individuals over the age of 50; pregnant and postpartum individuals; all children under the age of 18; and those at high risk of vulnerability, including but not limited those with respiratory conditions, heart conditions, diabetes, cancer, or other autoimmune diseases.

There are about 2,200 people currently being held in the Allegheny County Jail. According to details listed in on the Facebook event’s page, “more than 80% of those at ACJ are not convicted of any criminal offense; instead, 44% are held on alleged violations of probation, many of them technical violations or based on non-violent charges; 28% of them are held pretrial, with their presumption of innocence intact; countless numbers are held simply because they cannot afford cash bail.”

The event page also alleges that conditions within the jail are “crowded” and “unsanitary,” and that with 45 unfilled healthcare positions, it is understaffed and unprepared for an outbreak of the coronavirus. Allegheny County Jail, in the past, has been affected by mismanaged health care when a private contractor was hired. That contract with that company was ended a few years ago, but some health-care related issues have persisted.

According to criminal-justice site The Appeal, jails have a greater share of people with underlying health conditions, which makes them more vulnerable to COVID-19. Health rates among inmates include: 7% with diabetes, 20% with asthma, 10% with heart-related problems, 7% with kidney problems, and 26% with high blood pressure.

“Older people, those with respiratory and heart conditions and those with weakened immune systems will immediately overflow the infirmary, and dramatically contribute to overflowing our local hospital capacity,” reads a post on the page. “An outbreak cannot be contained. Most people are double-celled. They eat together, shower in the same places, share toilets. There are not enough hygiene items. And staff will carry this virus back to their families and communities.”

The groups also argue that the conditions within the jail are not conducive to social distancing, as recommended by the Center for Disease Control and Prevention (CDC) for preventing the spread of the disease.

The ACLU and two prison reform groups — the Pennsylvania Institutional Law Project and FAMM — have sent a letter to every county jail, federal prison, and immigrant detention center in Pennsylvania, outlining 10 areas of concern, “including proper education for prisoners and staff, the availability of hygiene products and precautions for prisoners who are at increased vulnerability,” according to the ACLU’s website.

Participants are urged to call early and often, and to use their time at home in self-isolation to the benefit of their community.

“We must love and support each other and force the County Executive and all other officials to take bold action to save lives,” the page said.