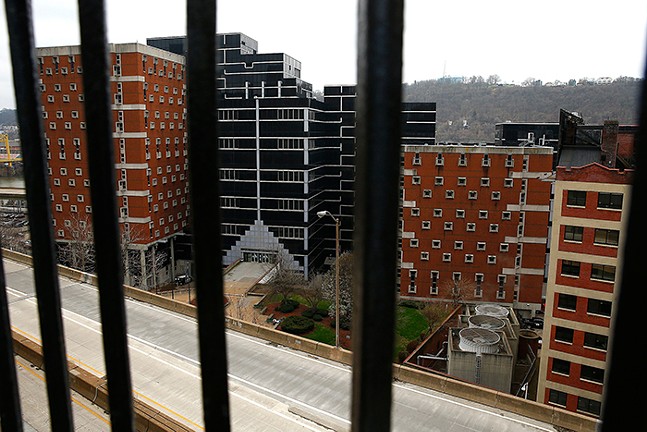 CP photo: Jared Wickerham
Allegheny County Jail
Pennsylvania has one of the highest percentages of people on parole and probation of any state in the country, and it contributes greatly to the state’s bloated population of incarcerated individuals. According to the reform alliance, on any given day, Pennsylvania has several thousand people incarcerated as a result of a supervised violation.

In April 2020, even after about 700 incarcerated individuals were released due to COVID precautions, the Allegheny County Jail was still holding more than 600 people on probation violations related to previous convictions, according to TribLive. The jail's population in April 2020 was 1,564 individuals. Jails typically hold defendants before their trials, but also accepts detainees from state and federal governments, and holds people on parole and/or probation violations.

A new grant from the state government hopes to help reduce that incarcerated population of people on probation or parole inside the Allegheny County Jail.

State Rep. Emily Kinkead (D-North Side) announced last week that Allegheny County has received $2.7 million in funds from the Pennsylvania Commission on Crime and Delinquency to support and enhance adult probation and parole services in the county.

“Rather than warehousing people in the Allegheny County Jail, this funding will allow individuals under probation services to rehabilitate in the community,” said Kinkead in a press release. “Coupled with effective drug and alcohol treatment programs, this can help reduce recidivism rates and help people build back their lives as they work to reintegrate into society.”

Kinkead said the funds will help reduce the jail’s population through enhancing the county’s electronic monitoring program and provide more effective supervision of people on parole or probation. The funds will also be used to continue the county’s drug and alcohol treatment program to support those on parole.

According to the Allegheny County Jail's website, there are 1,710 incarcerated individuals in the jail as of June 11. Last year before COVID, the jail's daily population was averaging about 2,400 individuals.