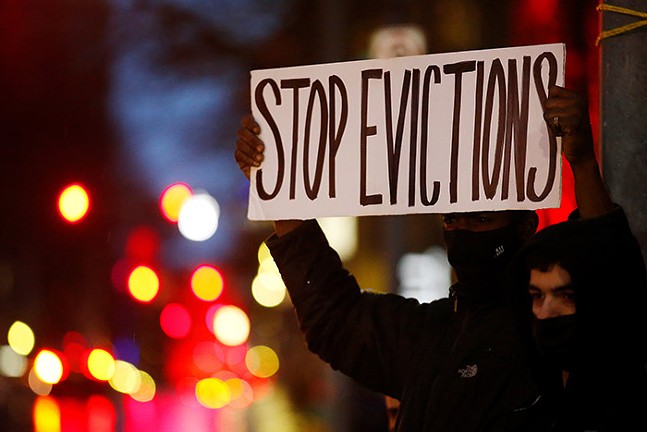 CP Photo: Jared Wickerham
A Pittsburgh resident facing eviction holds up a sign during a rally organized by the Pittsburgh chapter of the United Neighborhood Defense Movement in February 2021.
For two days during the first week in August, tenants in Allegheny County had no protection in eviction cases due to the Centers for Disease Control and Prevention's eviction moratorium expiring and not being immediately renewed. The moratorium had been in place for months as a way to protect people from evictions during the ongoing COVID-19 pandemic, which has led to mass unemployment.

During those two days, Allegheny County eviction filings skyrocketed, as did cases where judges ruled in favor of the landlord and order for possessions, where a tenant can be removed from a unit by a constable. That two-day lapse in the moratorium led to Allegheny County eviction filings multiplying by nearly five times the daily average for 2021, and led to order for possessions spiking by more than seven times the daily 2021 average. Nearly 60 orders for possession were issued over Aug. 2 and Aug. 3, when, under previous circumstances of the CDC moratorium, likely only about seven of those would have been issued. These orders allowed the landlord to have tenants removed from their homes about ten days after being issued.

Advocates say the extension is not only humane to prevent evictions when people still may be unemployed due to shutdowns, taking care of sick loved ones, or quarantining for their own health, but that it’s smart policy because there are still tens of millions of dollars on unspent rental assistance that can only be funneled to tenants in need.

Abby Rae LaCombe of Rent Help PGH says that the Allegheny County Emergency Rental Assistance Program (ERAP) approves close to 98% of applicants and the funds are then funneled into rent payments to landlords. She says Allegheny County has spent about $20 million of its allocated rent assistance funds on 3,500 households, but there is still about $53 million left to spend. And it can only be spent on rental assistance, according to federal law. LaCombe notes that Allegheny County government, working with local nonprofit group Action Housing, has been comparably very good at distributing rental assistance funds, and says not allowing the adequate time to let that continue would be a huge mistake.

“Lifting the moratorium when the money is there is absurd,” says LaCombe. “It takes time to get your application through, especially if you are elderly and don’t have computer access, or a single mom with two kids.”

LaCombe says she sympathizes with some landlords in terms of dealing with problem tenants, but says that over the two-day moratorium lapse, the vast majority of cases filed were not tenants who were destroying property or other extreme cases. They were people still struggling economically because of the coronavirus shutdowns. She says most of the people Rent Help PGH works with on eviction cases are single mothers, and about 20-25% are seniors on fixed incomes.

“We talk to over 100 people a week, they are all good hard-working people and seniors, everyone is someone that has been punished by this pandemic,” says LaCombe.

If the rate of eviction cases and rulings during the lapse kept its pace, LaCombe says there would be no places for many Allegheny County residents to go, citing the region’s shortage of affordable, subsidized housing, and how many tenants facing possible eviction have been particularly hard hit by the pandemic. LaCombe says many of Rent Help PGH’s clients sold their cars during the pandemic to make ends meet, and don’t even have the option anymore of sleeping in their vehicles if evicted. Without a moratorium, LaCombe says local social services would be overwhelmed in trying to help people.

“No, it's not sustainable,” says LaCombe. “It’s like watching a Mack truck head straight down the road for you.”

Anne Wright of Carnegie Mellon University’s CREATE Lab has been tracking eviction cases throughout the pandemic in Allegheny County.

Both Aug. 2 and Aug. 3 easily eclipsed that with 75 and 80 filings, respectively. After news of the renewed moratorium hit and Judge Clark’s request was authorized, filings dropped off significantly. On Aug. 6, there were 17 eviction cases filed in Allegheny County.

Landlords are still technically able to file eviction cases throughout the CDC moratorium, citing extreme examples of tenant negligence and other violations. This could lead some to believe that eviction filings might remain steady even under the moratorium, but Wright says the filing data shows that moratoriums and announcements of moratoriums had a tangible effect on landlords filing eviction cases.

“If you hypothesize that it won’t make a difference because they can still file with the CDC declaration, that is not what happened,” says Wright.