“I feel like in the next term we will be able to take it to the next level.”

Rich Fitzgerald is the region’s No. 1 salesperson. It’s Jan. 12, the snowiest day of the year, but the Allegheny County Chief Executive is determined to attend all of his scheduled events, including announcements about the airport and a press conference for the Pittsburgh Marathon.

“Not a lot of people outside the area know about the growth in Pittsburgh,” Fitzgerald says, as he exits his office at the Allegheny County Courthouse. “It’s about getting that word out.”

For his first three events, he chooses to walk, snow be damned, at a brisk pace through Downtown Pittsburgh. On Penn Avenue in the Cultural District, he sidesteps a group of young people strolling too slowly. He wants to walk, but he has places to be. 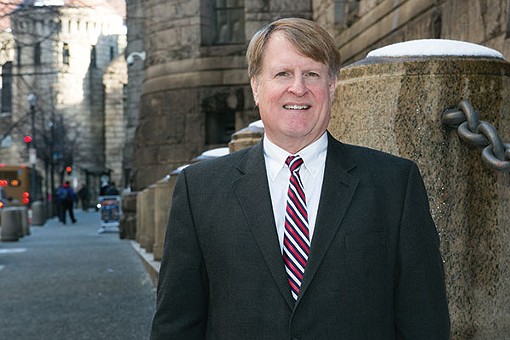 At each event he talks, in his off-book style and thick Pittsburgh accent, about the growing economic vitality of the region, like how the Pittsburgh International Airport added 17 new routes over the last year. And according to estimates, Allegheny County added around 8,000 residents since 2010, the first county-wide population increase in more than 50 years.

Fitzgerald has just completed his first four-year term as county executive, Allegheny County government’s highest-ranking official, and in that time, he has become a bit of a polarizing figure. He has gained support from Pittsburgh city officials, many of the region’s corporations and Gov. Tom Wolf, all of whom have cited Fitzgerald as a key component of the region’s economic growth. But critics have taken issue with some of his decisions and methods, particularly his management style and his role in facilitating natural-gas drilling, or fracking.

Critics notwithstanding, Fitzgerald won re-election handedly and says more growth is on the way for the county.

Pittsburgh Mayor Bill Peduto says the level of cooperation between him and Fitzgerald is “historic.”

“I can’t recall a time when there has been such a positive relationship between a [Pittsburgh] mayor and a county commissioner or executive,” says Peduto. “There hasn’t been such a prolonged period where [they’re] working on a single agenda together.”

Peduto says the partnership has a “yin-yang” balance, where Peduto has good relationships with universities and Fitzgerald has good relationships with the Downtown community. Their collaboration means city and county grants are applied for together, which expedites economic development. It also presents a united front on big infrastructure projects, such as the ongoing push for green solutions for the upcoming ALCOSAN sewage project.

Fitzgerald says cooperation has led to success in his own administration, too. When he first took office, Fitzgerald says, he didn’t have many of his current staff members.

“A lot of these folks weren’t in place … so I feel like in the next term, we will be able to take it to the next level,” says Fitzgerald. “Now, after four years, there is a level of comfort and confidence with what [my staff] can do.”

But some think this so-called cooperation hasn’t been so easily won. Some of his opponents have criticized his methods. In 2012, shortly after taking office, Fitzgerald compelled many county board members to sign undated resignation letters, which would allow him to remove board members at will. He ended the practice in April 2013.

Allegheny County Controller Chelsa Wagner, Fitzgerald’s most vocal opponent within county government, expressed criticism over this tactic, and has claimed that Fitzgerald exerts too much influence over county council. Since he took office, only two out of more than 500 pieces of Fitzgerald-sponsored legislation have been defeated, according to council records.

Fitzgerald says his relationship with the county controller has improved over the past eight months, but he did not provide any specifics. After each official was re-elected, last November, they agreed to work together.

Fitzgerald says he has been able to accomplish a lot during his first term, including what is arguably his proudest goal, making the county financially stable again.

“When I first took office, we had just a little more than $5 million in the [reserve fund], and when I met with the rating agencies, they were ready to downgrade us,” says Fitzgerald. “And I made a commitment in front of them … that we were going to raise the fund balance, and we did that.”

The county’s fund balance, or rainy-day fund, currently sits at around $40 million. Since 2011, says Fitzgerald, the rating agencies have upgraded the county three times. (By comparison, state government’s fund balance is an embarrassingly low $231,000.)