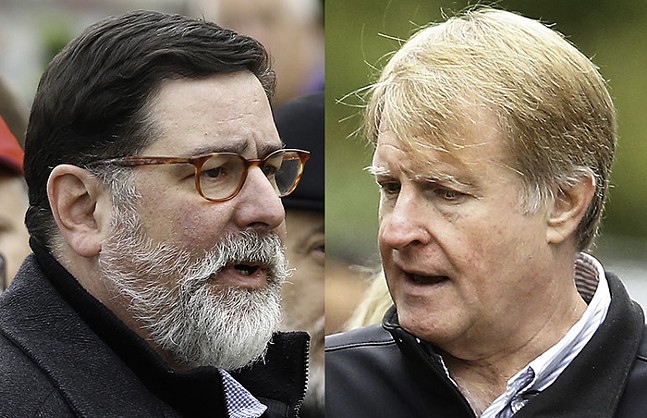 Petrochemical plants, aka cracker plants, refine natural gas into plastic pellets. The region’s first cracker plant is currently being constructed in Beaver County by oil giant Shell, which will likely be fueled by natural gas fracked in the Southwestern Pennsylvania region.

Peduto’s comments have generated significant pushback from pro-business, labor, and Republican politicians, while being celebrated by environmentalists.

Fitzgerald has long been a proponent of natural gas, the extraction of which is known as fracking. He was heavily involved in the push to allow fracking on county land in Deer Lakes Park and the county property around the Pittsburgh International Airport. He has also been a proponent of the Shell Cracker plant and voiced his support for additional cracker plants in the interview.

During the radio show, Fitzgerald added that after the steel industry collapsed in the 1980s, parents were resigned to the fact that their kids would have to leave the region for other opportunities, but that for the last 12 years since the fracking industry has grown in the region, that has changed.

The Pittsburgh region has stemmed some of its population decline problems, but between 2010-2018, the region still lost more than 29,000 people to domestic out-migration (when people leave the region but stay in the country). The main reason the Pittsburgh region has slowed some of its population loss problems is because of a small influx of immigrants.

“I will never forget seeing the Marcellus Shale thing in 2007 and then realizing we have hope, we have hope for the future,” said Fitzgerald. “For anyone to think that the growth of this region happened without this industry is just flat wrong.”

When Griffin then asked Fitzgerald if any companies looking to locate in the region have brought up the petrochemical plants as a deterrent from moving in, Fitzgerald said no.

“I meet with companies every single day and no one has brought that up. What they want to know is, 'Do we have workforce? Are we going to have transportation? Are you going to have enough skilled workers to meet their needs?'”

In September, thousands of tech workers at Amazon, Google, Microsoft, Facebook, Twitter, and Square all walked off the job in protest to “urge industry and world leaders to address climate change more aggressively,” according to the Washington Post.

According to environmental advocates, cracker plants and the natural gas industry have seriously adverse effects on the environment. The Beaver County cracker plant has been permitted to emit 2.2 million tons of carbon dioxide, the equivalent of adding more than 480,000 cars to the region. And drilling and processing natural gas has a high likelihood of emitting large amounts of methane into the atmosphere, which warms the planet 86 times as much as carbon dioxide, according to the Intergovernmental Panel on Climate Change.

Advocates are also concerned with the association with plastic, which will be produced by cracker plants. Plastic pollution has exponentially grown over the decades, with single-use plastics being the biggest offender.

“Plastics are gonna be made, we want to make sure we make it here,” said Fitzgerald.

Eventually, Fitzgerald addressed some of the environmental concerns of the natural gas industry.

He also noted air quality improvements in the region since the rise of natural gas. Air pollution has improved over the years in Pittsburgh, but the region still has the fourth-highest amount of air-pollution related deaths of any metro area in the U.S., and environmental advocates say cracker plants will make this problem worse.

According to Rolling Stone magazine, an 85-mile stretch along the Mississippi River between Baton Rouge and New Orleans contains more than 150 oil and petrochemical facilities, and this area is home to seven of the 10 census tracts with the highest cancer risk in the nation.

The KDKA radio interview, which starts at about the 16-minute mark on yesterday's show, lasted about eight minutes and included a lot of shouting and Fitzgerald making some questionable claims: He said wealth created by fracking and the cracker plant is leading to coffee shops popping up all over the Pittsburgh region, and suggested that all cars running on gasoline in Allegheny County should be converted to natural gas. Fitzgerald also hailed the home-energy savings of natural gas, but he didn’t mention how other energy industries, like wind, solar, or nuclear could affect costs.

“I don’t know where it came from, it was hard to believe,” said Fitzgerald of Peduto's statement.

Fitzgerald said on the radio show that he called Peduto, but had yet to hear back from the mayor.