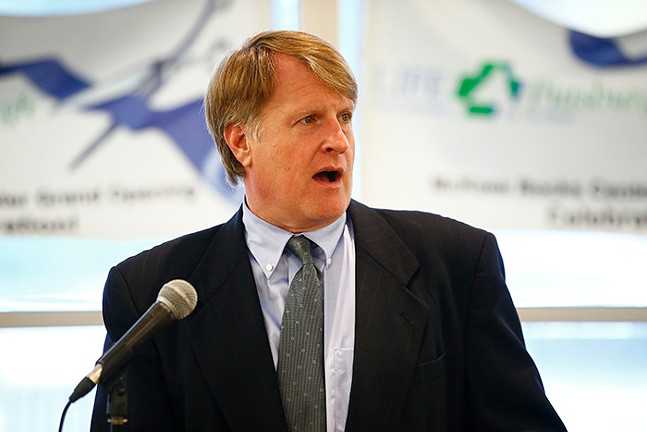 CP photo: Jared Wickerham
Rich Fitzgerald at a ribbon cutting ceremony at the Life Pittsburgh event in McKees Rocks
A week after Allegheny County Council passed a bill to provide paid sick days to workers of businesses and organizations that employ more than 25 people, Allegheny County Executive Rich Fitzgerald has vetoed the bill. On March 9, the bill was passed by a 10-4 margin.

In a statement, Fitzgerald said he supports the issue, but says the bill was passed the “wrong way” and that he believes it will have troubles if challenged in court.

“It’s simply not fair to give employees in our county false hope that they’re protected when the process followed by Council jeopardizes that,” says Fitzgerald in a press release. “If we want to protect our residents, families, community, and public health, we must do this in the right way to ensure that it withstands any legal challenge.”

The bill was written to provide at least five days of paid sick days to employees at medium and large businesses. It was modeled after the city of Pittsburgh’s paid sick leave bill, which successfully survived court challenges, and is currently law.

However, the press release states that County Solicitor Andy Szefi conveyed concerns to the County Council on March 8 that the regulation should have been put in place following the provisions of the Local Health Administration Law (LHAL). County spokesperson Amie Downs told WESA on March 9 that County Council didn't have the authority to initiate legislation meant to prevent and control disease transmission, and that process must go through the county’s Board of Health.

The paid sick leave bill was originally introduced in April 2020 and was worked on and amended several times before finally clearing committee and receiving a full council vote this March.

The March vote attracted support from nearly every Democrat on council, including the progressive wing that has clashed with Fitzgerald and other more staunch Fitzgerald allies, like Allegheny County Councilor Tom Duerr (D-Bethel Park), who lauded the passage of the bill last week. The three Republicans on council voted against the bill.

Allegheny County Councilor at-large Bethany Hallam (D-North Side) questioned why Fitzgerald has just recently shared legal concerns about the bill, considering the bill was introduced almost a year ago.

"This bill has been in the works for nearly a year, yet it wasn’t until 24 hours before the legislation came to the floor for a vote that suddenly the administration wanted to weigh-in," says Hallam in a statement sent to Pittsburgh City Paper. "The County Executive did not care about providing Paid Sick Leave to our shared constituents for the past year when this was being discussed, and he hasn’t cared about it for the past 10 years he’s been in his position."

Fitzgerald claims in the press release that his administration had begun working on a paid sick days policy prior to the pandemic, but had to put that work aside to focus on a COVID-19 response.

He reiterated his support for workers being provided paid sick leave, noting that “we don’t want people going to work who are contagious” and that many low-income workers are forced to go to work when they are sick because they need to pay their bills. He says he has asked the Allegheny County Health Department and Board of Health “to begin the work to promulgate regulations following the process outlined in the LHAL.”

Hallam disagrees with Fitzgerald and believes the correct process was followed, and that a passed bill would go through the county health department, and then back to County Council for a vote. She aid that County Council Solicitor Jack Campbest told council that the bill was "legally sound."

And she urged her fellow councilors to override Fitzgerald's veto, and cited her fellow councilor Liv Bennett (D-North Side) who wrote recently “For too long, workers in Allegheny County have had to choose between working sick or losing a day’s pay. [...] For older workers and those with preexisting conditions, the stakes are literally life and death.”