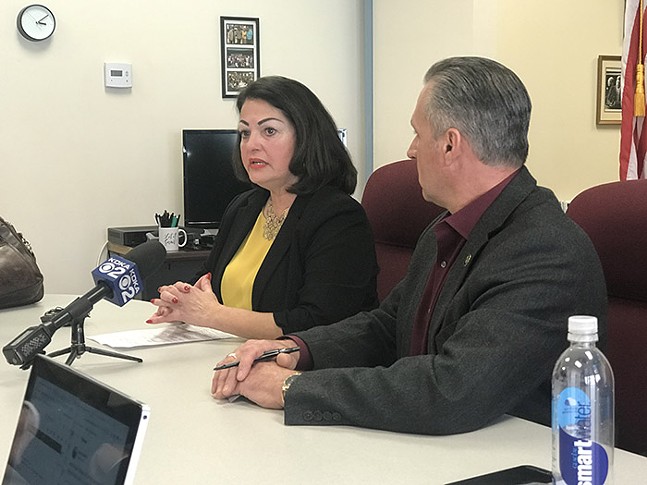 Following the endorsement, CP discovered more Trump support within the ACDC. The chair for the 24th ward in the North Side has a Facebook profile picture of himself wearing a Trump hat with the caption “Trump Train 2020.” A committee member from the 29th ward in South Pittsburgh shared a “Bikers for Trump 2020” meme in 2018. And a committee member in Ross has been sharing dozens of stories from pro-Trump media sites for the last two years.

Allegheny County Councilor Bethany Hallam (D-Ross), who is also a committee member, said yesterday that the ACDC has a DINO (Democrat In Name Only) problem and has heard that there is more Trump support than is known to the public.

“No, there are not,” said Kelly. “There are no Trump supporters in the committee.”

When asked about Jeffrey Anesin, the 24th ward chair who was wearing the Trump hat in the Facebook post mentioned above, Kelly defended him and said, “Well, you have to know this gentleman. He was doing it out of fun.”

Pittsburgh City Councilor Anthony Coghill (D-Beechview), who is also a committee member, was present at the press conference with Kelly. Coghill said that if a Trump supporter was in his committee, he would work to ensure they would be voted out of their seat in the next election.

“As a ward chairman, if it was in my district, I would wait until the next election,” said Coghill. “You bet your bottom dollar that I would put resources to get someone that supports Donald Trump off of my Democratic Committee.”

When asked if Anesin was violating the ACDC bylaws by posting a pro-Trump message on Facebook, Kelly said, “I don’t know if he is supporting [Trump] because he has a hat on.”

“I don’t know that he is doing that,” said Kelly, referring to Anesin’s possible Trump support. “I just think he is doing that out of fun. You would have to ask [Anesin].”

Anesin changed his profile picture yesterday to a photo of the Pittsburgh Steelers.

Both Kelly and Coghill said the ACDC does not have a problem with Trump supporters in its ranks.

Hallam tried to attend the press conference today, but Kelly and Coghill asked her to leave before it started. (Hallam remained outside of the closed door during the press conference.) When informed afterwards that Kelly and Coghill said they didn’t believe that Trump supporters sat on the committee, Hallam disagreed and said there is no way to argue against there being Trump supporters on the Democratic committee.

"There are people that have seen in real life what the pictures show us," said Hallam of committee members showing Trump support on social media.

She also said that Heather Kass has shown that her values align more with Republicans than Democrats and that her endorsement is proof that there are many members on the committee who are willing to support those same values.

Kass received 49 votes to secure the endorsement, compared to 19 received by Benham.

“Someone who is saying ‘Go Trump’ and who has spewed hatred not in line with the Democratic Party, do you think that someone like that gets endorsed by the Democratic committee without there being Republicans on the committee?” said Hallam after the press conference. “There are Democrats in name only on the committee. That is not what we are supposed to be about. The party is supposed to be about getting good Democrats, who align with our values, to flip seats. It’s not about going to parties and getting candidates to shell out thousands of dollars to seek the support of your own party.”

Kelly said she didn’t condone Kass’ past social media posts and added that Kass was at a “tough time in her life,” and she took her frustrations out on social media. She noted that Kass apologized for the comments.

Kelly did, however, have choice words for Allegheny County Executive Rich Fitzgerald. She criticized his support for candidate Chris Roland (D-North Braddock) who is running against state Rep. Summer Lee (D- Swissvale). Roland received the endorsement over Lee, which also caused several figures to criticize the endorsement process.

“The leaders of the party, especially Rich Fitzgerald, who helped a white male Chris Roland over an African American incumbent Summer Lee,” said Kelly. “It is unbelievable that the people he would help consciously try to rip up the party. During a crucial presidential election. We are to be united and in solidarity.”

“The Chairwoman insisted that the Democratic Committee endorsement process was flawless and needs no reforms. Then she attacked County Executive Fitzgerald for supporting a candidate who was endorsed by the same Democratic Committee,” said Nassif-Murphy in a statement. “No one has worked harder than Rich Fitzgerald to make sure Democrats win in 2020 up and down the ballot.”

Kelly and Coghill also blamed Benham for not getting the endorsement, as well saying that Hallam hasn’t apologized for her past, referring to Hallam’s drug-related record, something Hallam has been outspoken about.

Hallam, who admitted to having several disagreements with Fitzgerald, lamented both Kelly and Coghill for criticizing Benham, Fitzgerald, and herself.

“Our chair and city councilman had an opportunity today to stand up for our Democratic Party, to unite the Democratic Party in Allegheny County. And instead they choose to be more divisive than ever, and it makes me sick," says Hallam. "That is not how we win in 2020 and win down the ballot and not how we flip the nine seats we need to take the Pennsylvania House.”