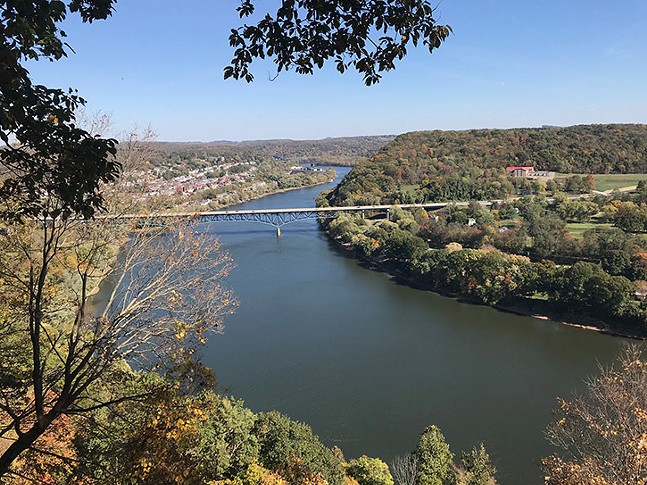 CP photo: Ryan Deto
View of Allegheny River from Harrison HIlls Park
The city of Pittsburgh has long had a moratorium against natural gas drilling, aka fracking, on the books since 2005, but that hasn't been true for Allegheny County as a whole.

In fact, Allegheny County Executive Rich Fitzgerald has been a strong ally of the fracking industry, and even led efforts in the mid 2010s to bring fracking to county-owned land at Deer Lakes Park and then to the Pittsburgh International Airport. But since that time, public opinion has shifted about fracking, even in natural gas rich Southwestern Pennsylvania. More locals, advocates, and politicians are openly against fracking, warning of the environmental impacts and pointing out the broken economic promises.

Now, on March 30, Allegheny Councilor at-large Bethany Hallam (D-North Side) is introducing a bill to ban fracking on most of Allegheny County parkland. The legislation, if passed, would ban all surface and subsurface leases in eight of the nine county parks; all parks except for Deer Lakes, where there are already leases for drilling. If passed, new fracking leases would be prohibited at Boyce Park, Harrison Hills Park, Hartwood Acres Park, North Park, Round Hill Park, Settlers Cabin Park, South Park, and White Oak Park.

According to a press release, Hallam said she was spurred into introducing this legislation because of the recent news reports about the possibility of leasing North Park, and she wants to remove the threat of fracking for the remaining county parks that are currently free of drilling.

“These parks are the crown jewels of the county. North and South parks, when they were established in 1931, were called the ‘poor man’s country club.’ They are not industrial parks,” says Hallam in a release. “These are lands held in common by all the people for Allegheny for our recreational use and enjoyment. They are the people’s parks. Environmentally speaking, these forested lands help us fight climate change and preserve our natural environment.”

Nearby McCandless Township updated its zoning in February to limit the areas in the township where fracking can occur. McCandless and the rest of the North Hills, once a Republican stronghold, has been shifting left over the years and has been supportive of some local Democrats who are openly opposed to fracking.

Hallam points out that the lease in Deer Lakes is in perpetuity and says that protecting the remaining parks from fracking is important. Fracking has been linked with unhealthy outcomes like increased asthma rates and lower birth rates, as well as water contamination and leaking copious amounts of methane, a powerful greenhouse gas.

“Our parks contribute greatly to the county’s livability and health for our 1.2 million residents and countless visitors to the county,” says Joelle Whiteman of Food & Water Action Allegheny County, which supports the legislation. “These parks need to remain safe spaces for the public to enjoy, and we are thrilled to be working with Bethany Hallam to protect them.”