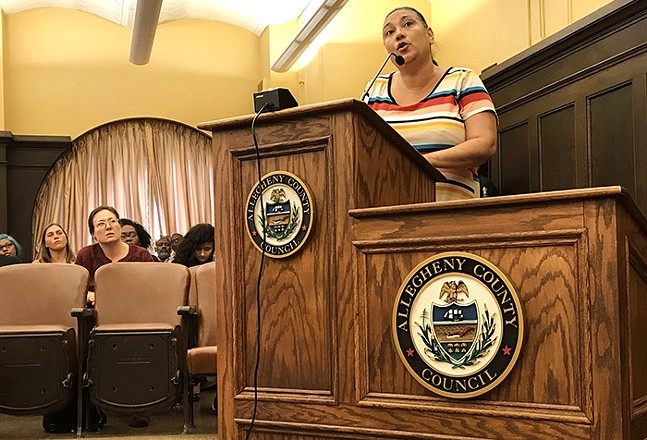 The majority of speakers were in favor of the proposal, an idea that started to gain support after the 2018 death of Antwon Rose II, an unarmed Black 17-year-old shot and killed by a police officer. Hundreds of counties and cities throughout the country have adopted similar programs, and proponents say the board would help combat corruption in the Allegheny County police force.

The City of Pittsburgh established its Citizen Police Review Board in 1997, following the shootings of two Black men by Pittsburgh police in the mid-‘90s. A drawn-out stalemate over the issue occurred in Pittsburgh City Council before the measure was finally adopted.

The council didn’t hold a committee vote on the legislation on Wednesday and will instead have a full council vote on it this Tuesday. Councilors DeWitt Walton (D-Hill District) and Paul Klein (D-Squirrel Hill) co-sponsored the bill, which proposes an 11-person board, with at least two members having had previous experience working in law enforcement.

“Police officers are employed by the people,” Klein said at the start of the meeting. “When police officers assume their duties, they take an oath to serve and protect. And professionalism is at its core about accountability.”

The most impassioned comments of the meeting came from Michelle Kenney, Rose’s mother, who said she had not initially planned to speak. She cited her years of work in a police department as to why she supports the proposed police review board.

“There is no way you can expect the police to police the police,” she said. “I want this review board not because of what happened to Antwon, but because of what happened to a lot of residents in Allegheny County. Someone has to give the residents in Allegheny County a voice. They have to have somewhere to go whenever things go wrong with their local police department.”

David Harris, a University of Pittsburgh law professor specializing in police behavior, law enforcement, and race, attended the hearing at the request of the bill’s sponsors to speak to its necessity. Walton and Klein consulted with Harris on the bill’s construction.

After speaking, Harris fielded questions from the council on the details of the bill. At-large Republican councilor Sam DeMarco said he didn’t see the necessity of a review board when people who believe they’ve witnessed a member of the police breaking a law can report it to a police chief or to officials at all levels of government.

“It seems to me like there’s a great deal of oversight already. I don’t understand why taking and putting in place a board of non-elected folks is somehow going to solve a problem,” DeMarco said.

“What we’re probably talking about here are not criminal actions,” Harris said. “The far greater number of complaints — and this is true of the Citizen’s Review Board here in Pittsburgh — are for conduct unbecoming, for rudeness, for violations of policy that are not violations of law.”

While it wasn’t obvious which way the council itself was leaning on the legislation, the public comment period was dominated by citizens voicing support for the bill. Of the 14 speakers, three were against the proposed review board and the 11 advocated for it. Allegheny County Council is comprised of 11 Democrats and four Republicans.

The GOP members generally seemed in opposition to creating the commission, and the Pittsburgh Post-Gazette reported that it’s unclear where all the Democrats stand. The Wednesday meeting gave no indication of how councilors stood because they didn’t vote the bill out of committee, and instead will vote in full on Aug. 27.

“Who guards the guardians?” Hallam asked. “This isn’t about attacking the police. This is about making sure everyone is represented.”