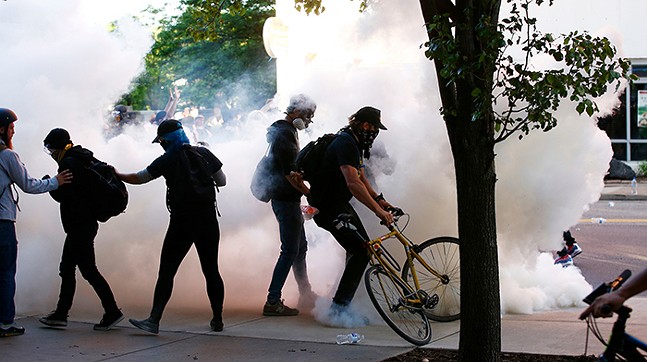 CP photo: Jared Wickerham
Protesters among tear gas fired by Pittsburgh Police on Centre Avenue during a march in the East Liberty on June 1
Earlier this week, Allegheny County Council voted down a bill that would have curtailed the use of “less lethal” weapons by police.

The bill would have banned police from using "less lethal" weapons, a category which included tear gas, bean bag rounds, and flash-bang grenades. During Black Lives Matter protests on May 30 and June 1, Pittsburgh Police fired tear-gas canisters, sponge rounds and bean bags at demonstrators. There is video of police also using pepper spray on demonstrators June 1.

This particular bill was first introduced back in early June, shortly after a number of instances in which police in Pittsburgh used some of these “less lethal” weapons on Black Lives Matter protesters. When first proposed, the bill garnered 268 public comments in support, but was not immediately voted on by the council because not all council members had access to all the comments. The bill was sent to the Health and Human Services committee, which voted against it, before it failed in the larger council meeting this week.

“Police officers probably would not have been able to stop the Target [onslaught] in East Liberty had they not had less lethal weapons,” said Councilor Nick Futules (D-Oakmont), who voted against the bill. “You see what’s happened all over the country, cities being burned down, and the looting is ridiculous. I would be ashamed to be a part of that city.”

Pittsburgh is currently being sued over its actions against protesters on June 1 in East Liberty. As Pittsburgh City Paper documented and video evidence shows, Pittsburgh Police, in full riot gear, fired sponge rounds and tear gas at protesters who were marching peacefully down Centre Avenue on June 1. Only after a loud bang sounded, and a tear gas canister was fired at the crowd, did some protesters respond by throwing water bottles. Before police confronted marchers on Centre Avenue, two windows were smashed in the East Liberty business district, but by a lone-wolf actor, and the marchers yelled at him to stop causing property damage as they marched by.

In response to Futules’ comments, Hallam emphasized the urgency of the situation.

“The status quo is untenable. We cannot carry on with business as usual; we cannot wait for any more of our Black neighbors to be killed at the hands of law enforcement officers,” she said. “We cannot wait for those who protest against the racism and injustice that pervades this country to be attacked by police with weapons that are illegal to use in the theater of war.”

During the comment period before the vote, several councilors expressed concern that taking “less lethal” weapons away from police would mean that officers would use lethal weapons more often in crowd control situations.

But, Hallam countered this reasoning by saying "there is no evidence whatsoever that the less lethal weapons described in this ordinance actually reduce the use of lethal force, despite what many of my colleagues would like to reference in their statements." According to a Governing magazine article from 2015, “it’s unclear whether the use of deadly force by police is falling and if the use of non-lethal weapons is the reason why” and Dennis Kenney, a professor at the John Jay College of Criminal Justice and a former police officer, doesn’t believe these “less lethal” weapons are going to cut police officer shootings.

After the vote, Hallam retweeted a post from a resident encouraging Allegheny County residents to run for County Council if their representative did not support the bill.

Also at the July 14 council meeting, a bill failed that would have required universal COVID-19 testing at the Allegheny County Jail and Kane Community Living Centers.

The test bill failed 10-5; sponsors Hallam and Bennet voted for it, joined by Catena, Klein, and Prizio. Since March, 32 people since March have been diagnosed at the county jail, including four who apparently contracted COVID-19 after an inmate working in the kitchen tested positive. Nineteen people also died at a Kane Center in Glen Hazel in the spring, according to reporting from WESA. Hallam sponsored a previous amendment to a bill that would have mandated testing for all Allegheny County employees, but that amendment failed.

Councilor Tom Duerr (D-Bethel Park) voted against the bill to mandate testing, arguing that testing was only a part of a larger solution, though at the meeting, he acknowledged that his aunt had been one of the people who died of COVID-19 at the Kane Center in Glen Hazel this spring.

“At this current moment, I have struggled with wanting to act with emotion instead of the pragmatic approach that I look to bring since I got onto council,” he said. “Plainly put, we need to listen to the experts we have surrounded ourselves with to advise us on these matters. If the department heads would have come before the Public Safety Committee and said that this is something that would have a substantial impact, I would have voted in favor of this without question, but they didn’t. And as the process has gone on, I have heard again and again that the testing is just a small part of a much larger COVID-19 mitigation strategy that our Kane Centers and our county jail are implementing.”

As pointed out by WESA editor Chris Potter, the positive case rate currently inside the jail is lower than the positive case right outside of the jail. In response, Hallam said that those who voted no on the bill are voting against working-class people’s safety.


Reminder that the NO votes on this voted AGAINST protecting OUR WORKERS. So next time they try to front as if they’re an “ally” to working class folks, remember this vote and give them a big 🖕🏽🖕🏽🖕🏽 https://t.co/hlAgMs4QII

“Every person should have the opportunity to be tested,” Hallam said on Twitter. “Lots of folks work during the testing hours throughout the community, and can’t get a test even if they want one.”