By CP Staff and Haley Frederick 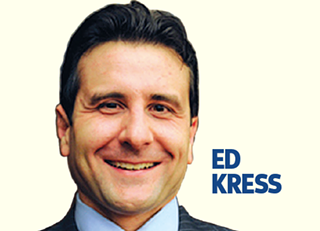 Bio: The incumbent, elected to represent council’s District 3 for a brief stint in 2005 and then again in 2013, is an attorney who lives in Shaler. Chair of the marketing committee, Kress is focused on locating sources of revenue for the county other than taxpayers.

Fracking: Is not aware of any problems involving fracking in District 3 and believes that possible hazards can be eliminated if “responsible measures” are taken at drilling sites. Says the energy industry has contributed millions of dollars to the community in the form of employment, spending, taxes, improved roads and revitalized parks. Kress voted to allow fracking in Deer Lakes Park.

Transparency: Is satisfied with the level of transparency on county council.  Says the public is made aware of proceedings through live streaming of meetings and minutes posted online, and that all meetings are open to the public, except in the case of an executive session.

Nonprofit UPMC: Introduced legislation in 2011 to review the nonprofit, tax-exempt status of UPMC. Worries the expiration of the state-brokered consent decrees between Highmark and UPMC in 2019 will end in-network access to UPMC for Highmark-insured patients, which he believes will lead some to being denied care.

Bio: A native of O’Hara, Prizio owns and operates an engine-parts company. She served on O’Hara Township Council for eight years, serves as treasurer for Healthcare4AllPA, and was elected as a delegate to the Democratic National Convention last year.

Fracking: Opposes fracking in public parks. Believes the risk to resources that have been protected for thousands of years far outweighs the financial benefits. But, if fracking occurs, Prizio advocates for thorough oversight of fracking companies and other polluters to reduce their environmental impact and to protect the public.

Transparency: Wants council to comply with the Pennsylvania Sunshine Act, which requires that it announce the reason for excluding the public from executive sessions — something she says hasn’t always been done. Believes that government should be like clean water: “transparent, accessible and free of toxins.”

Nonprofit UPMC: Open to tax-exempt status, if UMPC demonstrates that its tax breaks do more good than the equivalent public revenue would to increase efforts to fight the opioid epidemic with more accessible care for people battling addiction. Favors revoking nonprofit status if tax breaks are being used to fund multi-million-dollar executive salaries instead.

Another Pennsylvania is possible