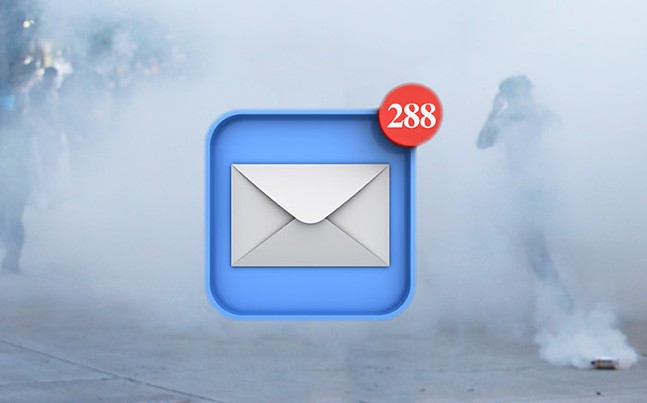 Allegheny County Council is considering removing the option to send public comments for council meetings by email after a large number of public comments were sent remotely in response to a proposed ordinance to ban the police use of “less lethal” weapons, such as tear gas, bean bags, and flashbang grenades. Some of these weapons were used in confrontations with protesters in Pittsburgh on May 30 and June 1.

According to an email chain obtained by Pittsburgh City Paper, county council President Pat Catena (D-Carnegie) is considering eliminating the option, which was added during the coronavirus pandemic, because it has caused confusion. He suggests moving back to council’s previous system of remote public comment through a web form. The email option was originally added in March to increase accessibility and make commenting easier during the pandemic.

The obtained email, from county council Chief of Staff Ken Varhola, asked councilors to weigh in on the topic, and noted that a tally will be made of responses to help Catena make a decision.

“Since the email was never intended to become a permanent option and unfortunately generated some confusion, President Catena would now like to eliminate the email as a way to submit public comment and only use the webform as we have done previously,” reads an email sent on June 15. The ordinance to ban some less lethal weapons was introduced on June 9.

Some county councilors agreed this was the correct move, according to responses in the email chain. However, Allegheny County Councilor at-large Bethany Hallam (D-Ross) is concerned that removing the option will make it harder for constituents to be heard.

Hallam and councilor Liv Bennett (D-North side) introduced legislation banning rubber bullets, tear gas, bean-bag rounds, flashbang grenades, and plastic bullets for use by police in Allegheny County. The proposed ordinance garnered 288 public comments, 268 of which were in support. However, Hallam decided against pushing for an immediate vote after learning that the council would not have the chance to read all of the submitted comments before voting.

Due to procedures adopted by the council to promote social distancing in the wake of COVID-19, comments sent in by email are added to the record, which is only available after the meeting concludes. Councilors are usually sent the comments by County Council staff before the council meeting. However, Hallam said that on June 9, she and the other councilors only received around 50-60 emails out of the total of 288 before the meeting. She said that she could not in good faith push for a vote when the council had not had the chance to read what their constituents had to say. The bill now heads to council’s Health and Human Services committee, which is chaired by councilor Cindy Kirk (R-Wexford).

“People are upset about it — I’m upset about it. A big thing that we ran on, especially myself and Councilmember Bennett, was bringing a change [to] county council, making it accessible, making it transparent, holding your elected officials accountable, and most importantly, co-governing with the folks we represent,” said Hallam. “The best way to co-govern is to make sure that everyone's voices are heard. When we're not even ourselves hearing what they're saying, how can we expect the rest of council to be able to take their input into consideration when voting?”

CP reached out to Catena and Varhola for comment but did not receive a response.

Some Pittsburghers on social media were confused by the decision not to read the comments at the meeting, including Twitter user Amy Scanlon.


Ooh here it comes y’all! They are introducing the ordinance.

There was to be a motion to waive second reading. But since comments haven’t been received @bethanyhallam wants to hold off

See, we got robbed because they never thought people would participate at this level

Local activist Gabrielle Monroe said that failing to read the emailed public comments at the meeting was “unacceptable.”


Is @AllCnty_Council suggesting they violate the sunshine act?

288 comments should be read!

This is unacceptable. Can everyone who submitted comment take legal action?

As of now, Hallam says the councilors still have not been emailed all the public comments related to the ordinance.

“Our staff and the solicitor and the president of council were all very open about how many we got,” she said. “But, if we’re not seeing them, how do we know?”

Hallam cited concerns that failing to send all comments to the councilors beforehand might violate the Sunshine Act, which requires open and public meetings and mandates that the public can attend, participate, and comment before official action is taken.

At the Council meeting on June 9, County Council Solicitor Jack Campbest said that the Sunshine Act does not require all council members to read all public comments prior to the meeting.

Hallam brought up that people who submitted public comments “had no idea that it was not going to [councilors]” when they sent their emails.