“I am questioning whether we should be making a profit.”

It’s official: We can now have our extravagant weddings inside the Allegheny County Courthouse. We can invite hundreds of guests, dance the night away, imbibe cocktails, munch fancy hors d’oeuvres, and even set up a cookie table inside the 130-year-old historical structure.

Thanks to legislation passed by Allegheny County Council in December, private citizens and groups can now rent the courthouse courtyard, grand staircase and main lobby for private events under official guidelines and pricing structures. The courtyard, with its well-known fountain, can cost up to $2,800 for eight hours on a weekend day for a space that can accommodate up to 500 guests, not including security and custodial fees of up to $800. (The staircase and lobby are $1,000 cheaper, but accommodate about half as many people.)

However, prior to the ordinance, according to Allegheny County manager William McKain, couples had long been permitted to hold weddings in the courthouse on a case-by-case basis. McKain says that such special events had no fee, with users merely reimbursing the county for security and custodial services. One such user, according to Pittsburgh Magazine, was a daughter of Allegheny County Executive Rich Fitzgerald, who held her wedding ceremony on the grand staircase in March 2013.

And some elected officials still have problems with the pay-to-wed ordinance, particularly the rental fee and the reasons for its passage.

Former Republican at-large Councilor Heather Heidelbaugh cast the sole dissenting vote against creating a fee structure for renting out spaces in the courthouse. She said “this is the people’s house” and challenged the idea of fees boosting the county’s bottom line. “I am not against the idea of using the space, but I am questioning whether we should be making a profit,” said Heidelbaugh at the December meeting. “Should a couple from Carrick be charged to use a building they already own?”

The Allegheny County Courthouse, designated a historic landmark in 1976, is considered one of the finest examples of Romanesque Revival architecture in the country. Republican Councilor Ed Kress of Shaler, who has voiced admiration of the building’s beauty in the past, headed the newly formed special marketing committee that ironed out the details of the ordinance.

Kress, a staunch proponent of the county raising revenue without raising taxes, said at the December meeting that he is glad to see county government thinking entrepreneurially. Previously, Kress has tried to sell naming rights to other county property.

“We are trying to get money from private sources to raise revenue,” said Kress at the December meeting. “This is not different than citizens paying to use the ice-skating rink.” 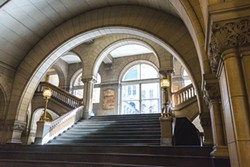 Heidelbaugh disagreed. She said that the county charges fees at county parks only to cover costs. “We don’t make a profit when we charge $35 to rent out a park shelter,” she says.

Council has previously discussed raising fees for park activities and rentals. But according to meeting minutes and video of meetings, that discussion was generally about covering rising costs, not raising revenue. In 2013, when rates were raised for county wave pools and rentals at Hartwood Acres Park, county council Vice President Nicholas Futules, who heads the parks committee, said that it was out of necessity, not a way to generate revenue.

County Manager McKain says that such facility fees are not “a money grab,” and that the county is “providing a fair rate for a great experience.”

“Our fees are probably among the lowest, and to say the least, very competitive,” says McKain. “We are often the lowest ones in our recreation fees. We make sure we are competitive, we survey other services in the region to do so.”

City Paper surveyed other large rental venues in the Downtown area and found that county courthouse rates might be on par with some competitors. For example, the Lexus Club at the Consol Energy Center holds a similar number of attendees and costs $2,750. The Wintergarden at PPG Place can be rented out to business organizations and nonprofits for $2,500. (The $5,000 fee for weddings includes maintenance and security, but guests can rent it out for an entire day or longer if scheduling permits).