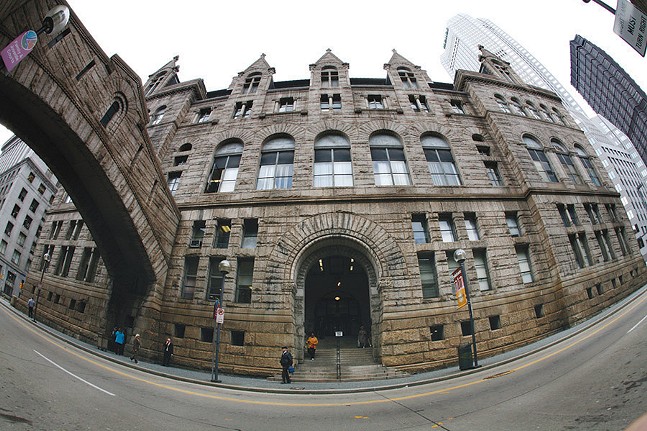 CP file photo: Heather Mull
The Allegheny County Courthouse in Downtown Pittsburgh
Russ Broman, an Allegheny County assistant district attorney, died yesterday due to complications from COVID-19. He had been hospitalized for over a month, and was placed on a ventilator for the last several days before his death. Broman was 65, lived in Upper St. Clair, and was respected and beloved by his colleagues and the District Attorney’s office.

Allegheny County Councilor Bethany Hallam (D-Ross), who proposed an effort on June 23 to test all county employees, says that the county has failed miserably on efforts to mass test. Her bill ultimately failed on July 15.

“Many of our local officials have been actively thwarting efforts, some led by myself and my colleagues, to increase access to testing and to implement policies of universal testing at county facilities and amongst staff,” says Hallam. “I hope this loss of life, and other community members whose deaths could have been prevented, weigh heavily on their conscience.”


It is with profound sadness that our office reports the passing of SADA Russ Broman at the age of 65 after testing...

Broman alleged that he was exposed to coronavirus while at work in offices in the Allegheny County Courthouse on June 30. He tested positive in early July. Broman worked in an office with Assistant District Attorney Ted Dutkowski, who also tested positive for coronavirus.

Coronavirus cases started to rapidly rise in Allegheny County starting on June 19. By June 30, new cases were over 50 a day, and by mid-July, the county was averaging about 200 cases a day. But offices there have never been closed completely, like they were in the beginning of the pandemic.

By July 6, a total of six courthouse employees had tested positive for COVID-19. The next day,  President Judge Kim Berkeley Clark issued an order closing down some in-person courthouse functions and rooms, but not all. By early July, Broman filed a complaint with the Occupational Safety and Health Administration, criticizing how the notification process for coronavirus cases found in the county courthouse was handled.

Also, around the same time, Kevin McCarthy of United Steelworkers, the union representing county assistant DAs, called for the courthouse to close in light of the rise in cases, or said there should at least be symptom-checking stations at the entrance to the courthouse, according to the Pittsburgh Post-Gazette.

Before all of this, and a week before the day that Broman believed he contracted COVID-19, Hallam proposed a bill in Allegheny County Council to require all county employees be tested for coronavirus, which she amended from a bill to require testing at the Allegheny County Jail. She was hopeful that including a plan to test all county employees would lead to more support. She has been concerned since the pandemic started, and before the small outbreak occurred among courthouse employees, that not enough testing had been done to keep workers and people safe. Her bill ultimately failed by a vote of 10-5 against on July 14, just a week after Broman was hospitalized.

“What we need is a massive expansion of testing capacity, a huge influx of resources to build out the county-run lab, and to make Allegheny County the leader in localized, mass testing. Like we have seen other countries do,” says Hallam. “Countries that have managed to get this virus much more contained than we have here.”

Pam Farrell, a courthouse legal secretary who knew Broman for 25 years, told TribLive that she was dismayed by Broman’s death. “I am heartbroken that this happened this way,” she said.