All Together Now: Breweries from around the world (and Pittsburgh) debut collaborative IPA to raise money for hospitality industry | Drink | Pittsburgh | Pittsburgh City Paper 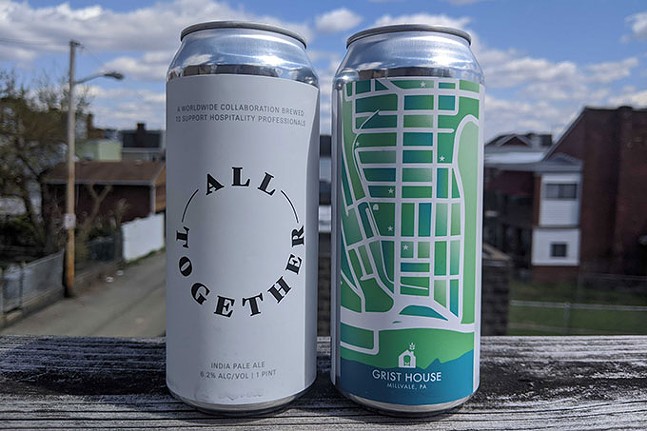 To support members of the hospitality industry in need, breweries across the globe — including many in the Pittsburgh area — are doing what they do best: brewing beer.

More than 700 breweries worldwide will produce All Together, a 6.5% ABV IPA, to provide relief and support for hospitality professionals. Other Half Brewing Co., the New York based-brewery at the head of this collaboration, has invited any brewer from any part of the world to produce the beer, with the understanding that a portion of proceeds will be given back to their industry.

“There is an inextricable link that binds together everyone in the hospitality industry. Brewers, servers, bartenders, bussers, dishwashers, GMs, buyers, chefs, owners — we are all in this together,” the brewery posted on the collaboration website. “In this industry, when one of us struggles, the rest of us pick them up.”

In Pennsylvania, 29 breweries have applied to be officially listed as part of the project (this is not a stipulation for participation). In Pittsburgh, Hitchhiker Brewing, Grist House Craft Brewery, Dancing Gnome Brewery, East End Brewing Company, and Eleventh Hour Brewing — which has brewed a version with its Lawrenceville neighbors Cinderlands Beer Co., Hop Farm Brewing Company, and Roundabout Brewing — are planning to release their own versions of the beer.

To participate, breweries are asked to follow a list of guidelines: Every All Together beer will be based on the same recipe, though brewers are invited to add their own twist. The recipe — made from ingredients that should be fairly easy for all brewers to source — is for a New England or West Coast style IPA (the style is up to the brewer).

Stout Collective, a marketing and design platform specific to the beer industry, has designed a label template that Other Half is asking brewers to use for their cans. They have left a space for brewers to personalize the label with artwork, logos, or whatever they see fit.

All of the documents, from recipe to label, are open-source and available for direct download on the All Together website.

Profit donations are left to brewery discretion. Grist House is putting theirs back into Millvale; Eleventh Hour and their partnering breweries are donating funds to the Lawrenceville Corporation who will then connect it to those in need.

The All Together collaboration is open-ended, meaning that there’s no set timeline for the beer’s release. Of the city breweries participating, only Hitchhiker and Grist House have released their versions of the brew. The Lawrenceville brewery partnership has the brew sitting in Eleventh Hour’s 20-barrel system, and it’s anticipated to be ready in three to four weeks. (Cans from this group will be available at each brewery, not just Eleventh Hour.) East End is expecting a release on May 10, and Dancing Gnome will have theirs up for purchase on Tue., April 28. For updates, visit each brewery’s website or social media pages.