Photo: Courtesy of Neon
Nan in the bathroom with Bea Boston, 1970s

Does art matter? This is a very stupid question. We know it is stupid because it dissolves itself when looked at for more than an instant. Part of this is that we barely even know what art is: what good art is, what bad art is, what brilliant art is. Our sense of aesthetic pleasure might even be too dull for us to figure it out, mired by a haze of overstimulation and supposed subjectivity. So let’s start with an only slightly less stupid question: do artists matter?

Documentarian Laura Poitras — best known for her films documenting government abuses and the individual actors caught up in them — takes up this question in her latest film, All The Beauty and The Bloodshed. Poitras was brought on board the film by producers who were initially pitched by the film’s subject — photographer Nan Goldin — herself. Goldin’s initial vision of the film was to document the work of P.A.I.N. (Prescription Addiction Intervention Now): an activist group founded by Goldin and dedicated to shaming the Sackler family, with an eye towards the art world’s laundering of their reputations for donations.

Instead, Poitras developed a interest in Goldin’s life and work as an artist. The film makes clear that Goldin’s work as an artist and an activist is entirely tied up with her life. The best example of this is her most well-known work: The Ballad of Sexual Dependency. The photo series chronicles her life alongside the lives of her friends and lovers — including photographer David Armstrong, actress and writer Cookie Mueller, filmmaker Jim Jarmusch. Her lens captures them as they fuck, dance, kiss, perform, take drugs — lit up with flash and saturated with color. In what Goldin has described as the “central image” of Ballad, she photographs herself after being beaten by a boyfriend. Her red curls turn dark brown in the harsh light, her skin pale, the bruises around her eyes dull. There are just two stabs of color: the blood pooling in the white of her eye, and her lips — painted blood red to match.

The drug use Goldin documented in her photographs became an addiction for her, one she recovered from only to relapse in 2014 when prescribed Oxycontin after a hand injury. When Goldin saught treatment, she learned how the Sackler family — heirs to the Purdue pharmaceutical fortune — sold Oxycontin as a safe cure for pain, all while knowing how potently addictive it was. Compelled to act, she formed P.A.I.N. “My anger at the Sackler family, it’s personal,” Goldin says.“I hate these people.”

The film is structured around organizing meetings in Goldin’s apartment and the actions that result. We see the members of P.A.I.N. cluster around Goldin in her apartment or sit in cars with her, rhythmically placing stickers on pill bottle props used in demonstrations (“I love working in a material I know: blue Valium bottles.”). It’s a familiar scene to anyone who’s done some form of political work: the terse faces occasionally broken up by bleak jokes, the push and pull of logistical jockeying.

One of those demonstrations takes place at the Guggenheim — which, at the time, had an arts education center bearing the Sackler name. The members of P.A.I.N. throw paper prescriptions into the air of the building’s atrium — a reference to a 1996 quote from Richard Sackler where he said “the launch of Oxycontin tablets will be followed by a blizzard of prescriptions that will bury the competition. The prescription blizzard will be so deep, dense, and white …” And so they make it literal: we see the blizzard of prescriptions raining down from above, fluttering to the floor. The music rises, and the camera tilts up towards the white slips in a moment that feels like freedom.

There’s a dramatic sensibility here that’s not dissimilar from the one we see at work in Goldin’s photography. P.A.I.N. member Megan Kapler recalls looking up in the Guggenheim and being “in awe of the visual it created.” The same impulse that animates her painted lips in the photograph also animates the staging of these demonstrations. The invisible is not just made visible, but so vivid that you’re unable to look away. The tormented ties of love and violence, money and power, are forced upon us by Goldin’s aesthetic sense. 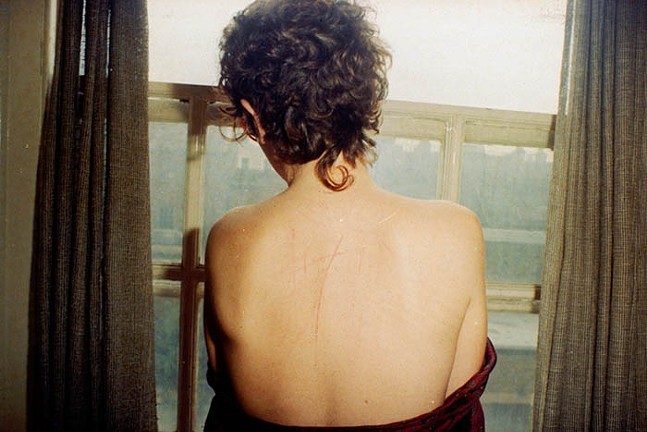 Photo: Nan Goldin
“Self Portrait With Scratched Back After Sex, London 1978"

All The Beauty and The Bloodshed finds a unity between Goldin’s aesthetics and her ethics, while making it clear that it’s the result of a life that never allowed her to separate the two. Her art career was borne from photographs that transfigured her life into her material; her artwork hangs in museums that run on money from a family whose drugs killed her friends and almost killed her.

But these kinds of connections are not unique, either. We are all haunted by them. Our work, our suffering, our sex, our love, our death: all of these things are tied together by a system of economic and political imperatives that we are mostly too frightened to look at closely. Goldin’s choice to fight on her own terrain — the art world — may be exceptional, but for her it is a natural extension of the way she approaches everything else.

“Photography was a way to walk through fear,” Goldin says at one point. The distance of a lens allowed her to document how she saw the world, which allowed her to bear it and then change it. It also made her an artist — something that, in the end, might matter after all.