"He always referred to the drawings as cartoons. We come to find out, it's American folk art." 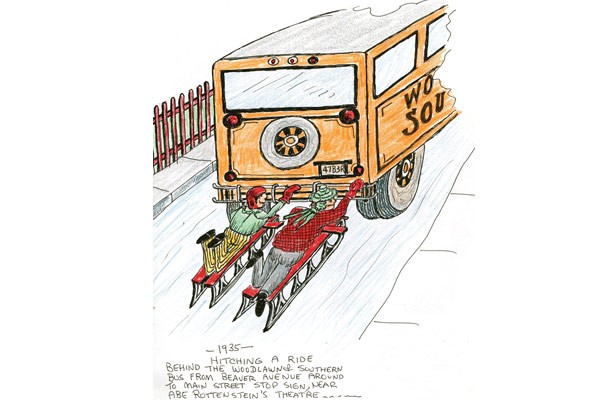 Jim Messina was 50 when a back injury he sustained as a Marine at Guadalcanal forced his retirement from J&L Steel's Aliquippa Works.

But his next avocation is what sets him apart from most who grew up during the Great Depression, fought in World War II and worked in area mills: Messina took up drawing and later wrote his autobiography. And the late Messina's charming illustrations and guilelessly affecting prose have been assembled by his son Chuck Messina into an oversized, 221-page paperback titled Grit Smoke and Steam (on local genealogy specialists Closson Press).

The book — the first volume in a planned series of five — starts with Messina's earliest days in West Aliquippa, where he was born in 1922 and grew up between a funeral home and the Slovak Hall. It ends just before the war, with his decision to enlist in the Marines.

Most of what's in between sketches a Depression-constrained but surprisingly idyllic small-town childhood (where Jim's boyhood accomplices included future composer Henry Mancini). Kids shot dice in the alley, skated at the Monaca Roller Rink, fished for coins in sidewalk grates with a bamboo pole and a wad of gum. They even went skiing, on bent steel rods.

A later section, complete with Messina's own photos, details his and local friends' adventures when, in 1939, they took their first train ride and headed West to build roads in New Mexico for the Civilian Conservation Corps.

Most of the drawings — whether in pencil, charcoal and ink, watercolors, oil and tempera — are rendered in simple, even childlike terms. (Some streetscapes are more draftsmanlike.) Messina was self-taught; he meant his words and drawings — originally titled "My Life" — simply as a keepsake for family. "He picked himself up and he found another interest in drawing," says Chuck Messina. "It's just an amazing gift he left me."

"He was really talented for never taking an art course," adds Messina. "He always referred to the drawings as cartoons. We come to find out, it's American folk art."

Messina, who'd encouraged his dad's efforts, had himself studied art but spent most of his working life as a flight attendant. Jim Messina died in 2008. His son, 57, now lives in Philadelphia and is gathering material for volume two, covering his father's Guadalcanal experience.

The book has sold about 180 copies, says Messina. It's available at www.clossonpress.com, through www.facebook.com/GritSmokeAndSteam, on Amazon and at Café Kolache, in Beaver.