The local musician and Internet celeb heads for Los Angeles 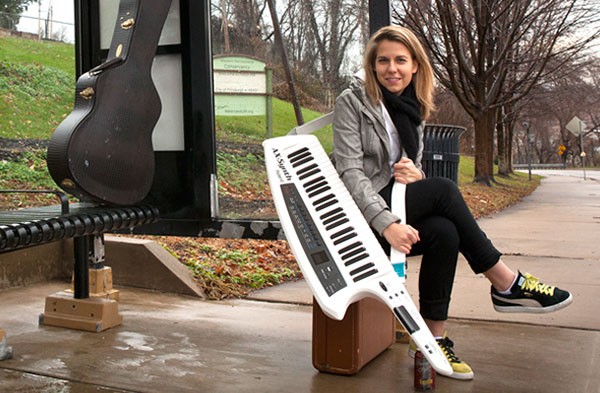 By now, you've probably heard something of the Ali Spagnola saga: Well-intentioned Carnegie Mellon art student makes and markets a "power hour" drinking-game album of 60 original one-minute songs. She receives a cease-and-desist letter for using the trademarked term "power hour," spends three years (and $30,000 of her own money) fighting and eventually winning a legal battle to free the term for herself and future generations of party-minded college students, and becomes Internet-famous in the process.

You won't believe what happens next.

"I've got to make the follow-up to The Power Hour Album."

For a couple more weeks, at least, Spagnola is still in Pittsburgh. When I met with her recently at a South Side coffeeshop, she was dressed in jeans and a pink Power Ranger hoodie. "I was actually wearing this last night at the strip club," she told me. "That's how awesome I am today."

The strip-club visit was the latest of Spagnola's "Snapchat Stunts," which basically involve Ali and some friends going out and acting a fool. Anybody can watch it unfold in near real-time on Snapchat, or later on YouTube.

Today, Spagnola has well over 1.4 million followers on Twitter. Her Vine account, launched last April, numbers more than 360,000. That places Spagnola in the top 650 Vine users worldwide, a few spots above the likes of Zac Efron and Will Ferrell.

"I think most of my followers just think I'm a comedian," says Spagnola, "or like, make free jokes on the Internet for a living, which is not the case. There are plenty of times when they'll be like, ‘Oh, you do music too?'"

It's not hard to understand the misconception. Aside from the live power hour and the occasional cover song on YouTube, Spagnola's musical pursuits have been limited as of late. Her most recent album is still The Power Hour Album, released in 2011 — a lifetime ago in the social-media age, especially for someone with four albums under her belt.

"The app came up," she explains, referring to the mobile version she designed of The Power Hour Album, "and other stuff too. I was touring; I was doing comedy."

Until recently, Spagnola served as a member of the Pittsburgh Penguins Ice Crew. "It's like ice dancing if janitors did it," she jokes. "I wanted to make some viral incident about getting fired from the Pens, but instead it was, you know, a pleasant resignation letter."

"My most legit job right now is Fandango," she says. "I make music videos for them about their upcoming movies. We've only done one so far, and it was to announce Transformers 4. I basically rapped through the first three Transformers movies in two minutes, so you don't have to watch them before you see the fourth one."

Since then, Fandango released a second music video written by Spagnola. In it, she plays a crazed Hunger Games fan camped outside a theater three weeks prior to the Mockingjay, Part One premiere. It's concise, clever, catchy and just the right amount of corny — everything that's made her so popular thus far.

The ultimate goal, Spagnola says, is nothing less than pop stardom.

"That's what I'm going for," she says. "To keep whatever Internet presence that I have, but make some music that still resonates."

"I don't think anything that I do will be too disparate from what I did before," she says, "because it's still me. And, if anything, I hope that my fan base would want something fresh."

"[I have] two or three [songs] that are at very early stages," she says about the new album. "There's not going to be a game, or anything. It's not going to be [another] Power Hour. I wouldn't say it's comedy music, but it will be the funny, tongue-in-cheek, witty stuff that I am usually writing."

Pressed for details, she provides this example:

"Macklemore wrote ‘Thrift Shop,' and it's clearly a funny song, and it's also really freaking catchy and actually good music. And then he can also turn around a write a song about gay marriage, and be taken seriously on both levels."

"The tagline is ‘pop music for smart people,'" she continues. "So, witty lyrics that you don't have to be shallow to appreciate, but it's still very catchy, upbeat kind of stuff that you can dance to."

Spagnola's move to LA will come a year after she left her job as lead artist at Evil Genius Designs, a video-game company and spin-off of CMU's Entertainment Technology Center.

"[The job] was super fun; it was tough to leave that," she says.

"It just became very clear that I needed to dedicate all my waking moments to music. And I didn't have time to cram it in from 5-9 anymore. I was moonlighting as a rock star instead of being a full-time rock star," she says with a laugh.

Quitting a successful and rewarding job to pursue stardom may sound naive, if not downright foolish, but so far Spagnola has been successful nearly every step of the way. Her successes are as much attributable to her acumen and forethought as they are her talent.

"It's way less fun when you realize how much thought I put into a stupid Vine, or how many scripts I've written for Vines, or how many backlogs of tweets that I'm working until they're just right," she says.

"There's an oddly low-key, yet completely fierce ambition about Ali," says Nathan Zoob, of the band Wreck Loose. Zoob knows Spagnola from their days at CMU, when she played drums in The Mercy Rules, a band they were in together.

"She knows exactly what she wants," he says.

Before moving away, Spagnola, along with her drummer, Colin Morgan, has one final Power Hour scheduled, the day after Christmas at Club Café.

"It's going to be a freaking blast," she says. "We're making sure I go out with a bang."

Besides the show, I asked Spagnola what she has planned for her waning days in Pittsburgh.

"I have an Evernote about it," she says. "I have Evernotes about everything! It's this complex [software-based] note system where you can categorize, and tag, and search through all of your ideas. It's pretty fantastic."

Among the items on her to-do list: try 3-D printing at the Carnegie Library, do a Livestream Power Hour for her Internet fans, and eat at Primanti's.

And while Spagnola admits to being both nervous and excited to be leaving Pittsburgh, she'll only ever be a red-eye away.

"All my family is here," says the Beaver County native, "and I'll definitely come back for CMU's homecoming. I do Carnival every year, so I'll be back here in April, I'm sure."

Before that, Spagnola is scheduled to appear at SXSW. Only this year, she'll be there not as a performer, but as a panelist.

The panel discussion? "How to quit your day job and live your dream full time."