CP Photo Illustration: Abbie Adams. CP Photo Source: Lisa Cunningham.
According to her lawsuit, former Pittsburgh Post-Gazette journalist Alexis Johnson met with then-managing editor Karen Kane the morning after Johnson posted a tweet comparing the mess typically made outside of Kenny Chesney concerts in Pittsburgh with the property damage that occurred following a protest in honor of George Floyd.

Johnson, who is Black, was then barred by Kane and management from covering the ongoing Black Lives Matter protests. (According to court filings, Johnson says this was an on-going ban, while Post-Gazette claims this was just for one day after management rejected Johnson’s pitches.)

Shortly after that meeting, Kane lamented that she could not “do anything to Black people! I have to pick better targets,” according to Johnson’s lawsuit. The lawyers representing the Post-Gazette dispute Johnson’s claim as “pure fabrication.” According to the Post-Gazette’s Motion to Dismiss, the Post-Gazette claims that Johnson faced no workplace punishment besides being prohibited from covering topics that she has provided public commentary on.

This disagreement is just one of many between the Post-Gazette and Johnson, who filed a suit against the paper in June, alleging it violated the Civil Rights Acts of 1866 and 1964 by retaliating against someone who opposes or protests race discrimination. The crux of the Post-Gazette’s defense in the lawsuit is that the First Amendment protects the paper from Johnson’s discrimination claim, and that the paper was making editorial decisions.

This is rare legal territory, says University of Pittsburgh law professor and constitutional scholar Jerry Dickinson. “On the Motion to Dismiss, [there is] nothing rare about this,” says Dickinson, referencing the Post-Gazette’s attempt to get Johnson’s lawsuit thrown out. “What is unique and rare is a claim that the First Amendment can trump anti-discrimination law.”

Post-Gazette spokesperson Allison Latcheran says the paper has no “further comment beyond that which appears in our legal briefs filed with the court” and can’t comment since “this is a matter of pending litigation.”

If a jury sides with the Post-Gazette, Dickinson says it opens the door to allow newspapers and media companies to ignore or circumvent the Civil Rights Act. Sam Cordes, Johnson’s lawyer, believes that could become precedent too. He thinks the P-G’s defense is “pretty outrageous.”

“What [the Post-Gazette] is essentially saying is ‘we cannot be challenged on this because that is part of the editorial function,’” says Cordes. “But that is absolutely antithetical to the civil rights law and the First Amendment.”

During the meeting between Johnson, Kane, and other P-G management, Johnson pitched “stories about protesters who had been improperly jailed for 72 hours; social media protester bail fund raisers; and other social media campaigns designed to help businesses that sustained damage from demonstrations,” according to court filings.

According to the Post-Gazette’s court filing, Kane said Johnson “could not be assigned to protest coverage that day because of the general understanding that reporters should not cover events about which they had publicly expressed opinions.” This was because of Johnson's tweet.

Lawyers for the Post-Gazette said they could not comment on the case beyond providing the paper’s legal reply to Johnson’s Response to the Motion to Dismiss.

Johnson’s court filing calls this decision a “reassignment” and one that never should have happened because Cordes says the tweet in question is a race discrimination complaint and it is legally protected. In Johnson’s response to the Post-Gazette’s request to dismiss her lawsuit, she argues that the Post-Gazette’s decision to reassign her was race-based, and the paper’s defense is attempting to claim that the “First Amendment allows it to make race-based employment decisions with legal impunity.”

The meeting between Kane and Johnson occurred on June 1. Johnson did eventually write two stories relating to the Black Lives Matter protest movement; one on July 29 and another on July 30, more than a month after Johnson had filed her civil lawsuit against the Post-Gazette in mid-June.

Johnson left the P-G in October and has since landed a job at Vice News. Kane was taken off her role as managing editor in September, and now works as Deputy Editorial Director.

In its response, the Post-Gazette denies the assertions that Johnson was reassigned and that the paper is attempting to use the First Amendment to seek immunity from anti-discrimination laws. The paper argues that it merely rejected Johnson’s three protest-related pitches after saying Johnson’s tweet violated its editorial standards of not having journalists comment on topics they are covering or wish to cover. However, the paper did try to dismiss Johnson’s lawsuit on Oct. 16 “because the First Amendment bars liability for the Post-Gazette’s exercise of editorial judgment.”

This is where the waters get murky on what is a decision about editorial content and what is a workplace decision. Dickinson says the main question of the case is “whether it’s right or wrong to remove [Johnson] off the beat because of her comments.” 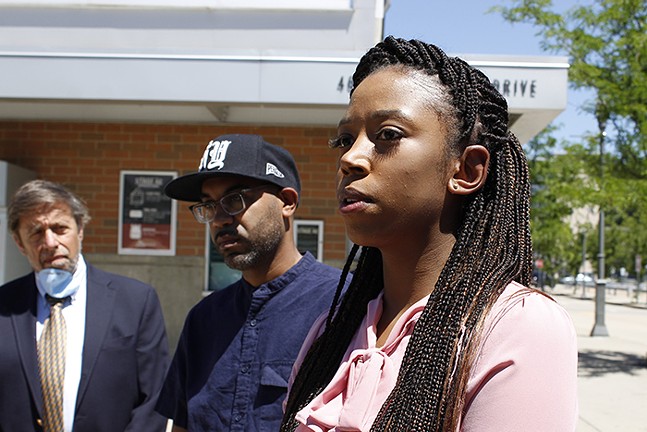 CP Photo: Julia Maruca
Alexis Johnson speaks to reporters at a Newspaper Guild of Pittsburgh press conference in June 2020.
Cordes, who has an extensive history with workplace discrimination cases in Western Pennsylvania, believes the Post-Gazette is trying to conflate speech with conduct. Kane’s rejection of story pitches is clearly a content decision. But removing her from coverage after a tweet is a workplace conduct decision, says Cordes.

“When I make a decision to do something, like hire or not hire, or assign or not assign, it is conduct and not speech,” says Cordes. “That is where the balance is struck. Unless you can show that your conduct is related to speech, then you can’t do it. And you do it in violation.”

Dickinson says the inclusion of the First Amendment in the Post-Gazette’s defense is a serious charge.

“You can’t have it one way and not the other,” says Dickinson. “Litigants can’t open the door to a constitutional protection that is so open to them, but close to the door on statutes and pieces of legislation that may harm your case.”

Though this argument is rare, it’s not totally unheard of. Dickinson points to Hausch v. Donrey of Nevada in 1993. In that case, Mary Hausch, a managing editor at the Las Vegas Review-Journal, was passed over for a promotion to editor in favor of a male outside hire, then she was given a new position, and a male replaced her as managing editor, with a higher salary. Hausch filed a complaint that the Review-Journal discriminated against her based on the Civil Rights Act of 1964.

The Review-Journal argued that applying the Civil Rights Act of 1964 would violate their First Amendment rights and claim that hiring decisions and the paper’s choice of leadership is under the publisher's “editorial discretion.”

The U.S. District Court in Nevada failed to see how the Civil Rights Act of 1964 “directly or indirectly infringe on Defendant's First Amendment rights” and found that the application of the civil rights law was content-neutral.

Concerning the Post-Gazette lawsuit, Cordes also takes issue with the paper’s assertion that its decision to reject Johnson was merely over her opining on social media. He says it's not consistent across all reporters at the paper, and uses that as an argument that the paper was targeting Johnson.

“Sports reporters tweet that they are in favor of the Steelers, and they are allowed to cover the team,” says Cordes.

Furthermore, court filings claim that Post-Gazette management didn’t reassign white reporters who had commented on stories they were covering. The Newspaper Guild of Pittsburgh union pointed out this summer that many reporters who commented on social media about the tragedy of the Tree of Life shooting were never removed from covering stories related to the Tree of Life.

This, combined with Kane’s alleged lament about dealing with Black people and her action in taking Johnson off of protest coverage, is Johnson’s main case for why the lawsuit should not be dismissed. And, according to court filings, Johnson believes that allowing the suit to move forward will reveal more instances to prove her complaint.

Dickinson says that he interprets the Constitution through the lens of a liberal, progressive viewpoint, and doesn’t believe the First Amendment should be used to immunize from civil rights law. But, he isn’t making any predictions for how this case will turn out. The case is currently being argued in front of Judge Nicholas Ranjan, who was appointed by President Donald Trump in 2018, to the U.S. District Court of Western Pennsylvania.

“Maybe this opens up an interesting ruling,” says Dickinson. “This case is being heard by a Trump appointee, so we will see how that goes.”