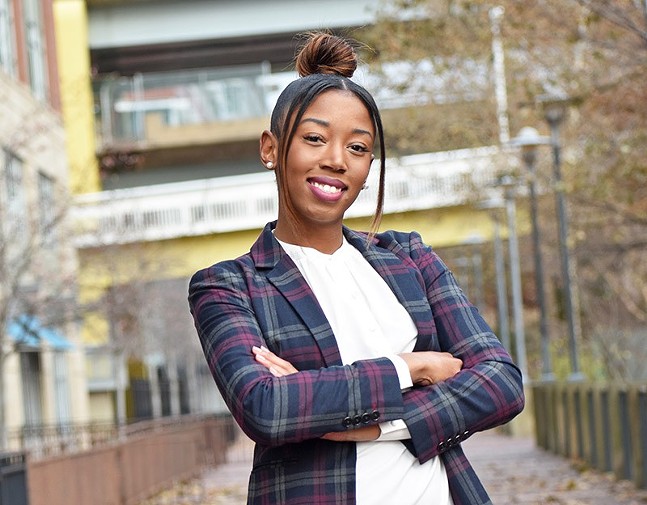 Photo: Shantale Davis
Former Pittsburgh Post-Gazette reporter Alexis Johnson now works at VIce News
This summer, journalist Alexis Johnson made national headlines after management at the Pittsburgh Post-Gazette, where she worked, banned her from covering the ongoing anti-police brutality protests over the killings of George Floyd and Breonna Taylor. Today, she has announced her new position at Vice News.

Shortly after the protests had begun in Pittsburgh in late May, Johnson tweeted a hilarious post that poked fun at the mess typically made outside of Kenny Chesney concerts, and compared that to people who were upset about some property damage that occurred following protests.

P-G management claimed her tweet showed she was “biased” and just about everyone else in America — her union, other prominent journalists, and even celebrities — said management’s claim was bogus. Large calls from Pittsburghers and others demanded that Johnson, who is Black, be allowed to cover the protests.

But management, namely Keith Burris and then managing editor Karen Kane, did not give in. Eventually, those two editors were moved off newsroom duties. But by then, Johnson had made up her mind about her future at the P-G, and she announced her resignation on Oct. 2.

Today Johnson announced on Twitter that she has joined national media outlet Vice News as a correspondent for their TV program Vice News Tonight, which airs Monday through Thursday on VICE TV, and also has a partnership with Showtime. She will be working with the DC bureau, but still based in Pittsburgh during the coronavirus pandemic.


NEW: I am super excited to announce that I have joined @ViceNews as the newest correspondent for Vice News Tonight working with the DC bureau.

I can’t say enough how pumped I am for this opportunity, and I’m so thankful for the journey that led me here!😁🙌🏾 pic.twitter.com/SsVov4aWmW

She thanked everyone who has supported her over the last few months.

“I can’t thank you guys enough for your support during these last few months! I am so excited for this next chapter and can’t wait to do great work,” Johnson tweeted today. “I always try to reply to everyone lol but if I can’t, thank you all again.”

Johnson is a Penn Hills native. She lived in Philadelphia while earning her masters degree from Temple University. She moved back to Pittsburgh in October 2018, when she started working at the Post-Gazette. Her work there was focused on handling P-G social media, on the morning schedule.

But she also has extensive experience in TV reporting. She worked as a TV reporter at Temple’s TV news program, as well as WVVA News in Bluefield, West Virginia.

Johnson isn’t the only talented journalist to decamp from the Post-Gazette recently. Pulitzer Prize winner Michael Santiago, who was also banned from covering protests, left the paper this summer and is now a photographer at Getty Images. Paula Reed Ward, one of the best court reporters in the city, took a buyout and is now at Trib Live. Many others have also left.

The Newspaper Guild of Pittsburgh, the union representing the 120 journalists at the P-G, has been in a years-long battle with management over their expired contract and other workplace violations. The union is currently on the verge of a strike, but is hoping the management will restart negotiations with them to settle any disputes.