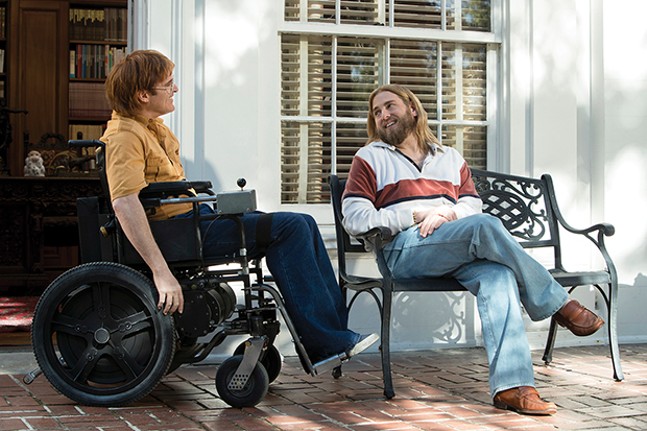 Based on the true life of paraplegic cartoonist John Callahan, Gus Van Sant’s Don’t Worry, He Won’t Get Far on Foot tells a poignant but overwrought story of alcoholism and disability.

John Callahan (Joaquin Phoenix) is a raging alcoholic barely keeping it together when he gets into a drunken car crash with his friend Dexter (Jack Black). Dexter walks away completely intact, but John is paralyzed. He continues drinking after the crash, but eventually gets sober with the help of Alcoholics Anonymous and Donnie (Jonah Hill), a charismatic sponsor who refers to God as “Chuckie.” Eventually, John turns to cartooning, poking fun at his own disability in the process. The cartoons get picked up by a local paper, then national publications. Sober and successful, he begins atoning for his past behavior.

Van Sant goes a non-linear route, flipping between Callahan pre- and post-crash, before and after sobriety. Sometimes it works, giving the story texture. Other times, it’s confusing and difficult to piece together.

The tone, too, is off. There are some great jokes, many coming from Callahan’s real cartoons, which occasionally appear onscreen as bookends. But it feels like one of those young adult “illness” movies in which rag-tag misfits help a protagonist confront reality. While the first half moves at a nice clip, the second is full of monologues that are too long, too on-the-nose, too much like a self-help TED Talk. Callahan pointedly moves through the 12 steps of Alcoholics Anonymous and at times it feels like a PSA for the program.

Then there’s the confusing way women in the movie are treated. A female doctor, explaining to John how his erections work differently now, encourages him to solicit sex from his nurse, which felt like an absurd dream sequence. Rooney Mara plays his counselor-turned-girlfriend and, despite appearing on the movie’s poster, has very few lines. She mostly exists to smile at John and tell him he’s handsome and a good cartoonist.

The big catharsis of the movie occurs when John finally accepts that he started drinking because he felt unwanted by his birth mother and adopted family. However, a cursory glance at the real Callahan’s story reveals that he partly blamed his alcoholism on childhood sexual abuse. It feels like an omission Van Sant made only because it made the story a little neater.

The acting is Don’t Worry’s strongest asset. Phoenix plays Callahan with heart and humor, showing dark, absurd, and funny sides of his disability and the alcoholism that got him there. Plus, it’s nice to see a rare movie where he smiles and laughs. We are currently in a confusing iteration of Hill, but he fully commits to Donnie, a disco-loving, silk pajama-wearing mentor.

It’s a decent watch for insight into alcoholism and disability, but this movie misses too many marks to leave a real impression.