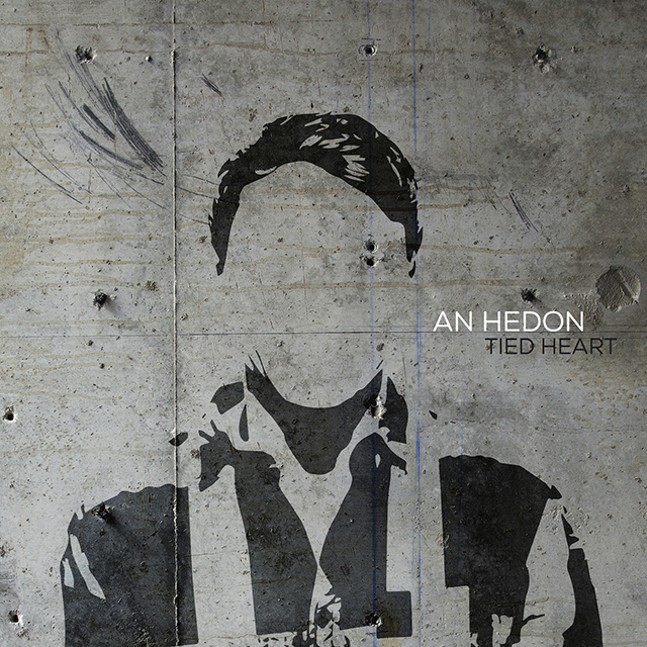 Playing off the word anhedonia, which is the inability to feel pleasure, An Hedon, the debut album from Alex Hartle aka Tied Heart, revolves around the joylessness and indifference associated with depression. Throughout ten disparate tracks, Hartle examines his struggles with the depressive disorder and how he relates to the world around him.

The dynamic, upbeat sound of An Hedon, which contrasts with the album’s overall theme, was written over four years and recorded in six months by Hartle himself, singing and playing every instrument but bass, played by Hartle’s cousin.

A mix of aggressive guitars, loud, forceful vocal delivery, and synthesizers, the album drops Jan. 18. Ahead of the release, Pittsburgh City Paper chatted with Hartle about depression, the album, and fear.

Listening to An Hedon, all ten songs have a different feel. Why is that?

I hate listening to albums that all kind of sound the same throughout. Like getting to [track 8] on an album and it all just blends together. And from a writing standpoint, I find it fun to challenge myself and get a different sound, you know, just exploring things because I’m definitely still learning and growing as a songwriter. So, I think part of it’s just natural. As I learn more things as a guitarist and a writer, I kind of stumble upon new sounds, and it’s fun for me to push myself and try new things.

Was it hard to balance each song’s individual sound while also having them mesh together collectively?

It’s something that I worried about a little bit, especially the song “The Fear.” I personally worried that it would stick out a little bit, because it’s a little more aggressive and rock-oriented than the other ones. But I think as a whole it works pretty well. So, I didn’t stress about it too much, but I certainly think my writing has a certain style that sort of unites them all together. Just the way I sing and play guitar — even if the textures are different from song to song — keeps it kind of consistent.

“If people are to take away anything from listening to the album … hopefully, they hear something that they recognize or describes something they felt.”

You picked these interesting words like “gossamer” and “ersatz” as song titles. What was your thought process behind that?

I would say naming things is my least favorite part of making music. Truly some of those titles didn’t happen until I had already started recording. I was like, “I can’t call this 1NG, it needs a name,” so a lot of times it’s a word from within the song. I do try and pick something that’s representative of the song as a whole. Like you mentioned “Gossamer,” which evokes something that’s really delicate. That’s something that I mention in the song – something that is easily breakable and delicate – and that song specifically is about a struggle in establishing communication between my wife and me, and me realizing [that I had depression.] I wasn’t sharing what all was going on with me and that’s because depression somewhat takes away your ability to do that. Even when I thought I was being honest, I was not, fully. So that relates to the idea that depression can feel like it doesn’t exist, but as the line says, “we feel it just the same.”

How do you feel like music has helped you?

Sometimes it did, sometimes it didn’t. When it did, songwriting is completely cathartic to me. Singing, specifically, especially when I belt and hit a note, the physical feeling of that is a great release. And being able to get my thoughts and feelings out in song is hugely helpful. But at the same time, there was a period of about eight months – and this has happened multiple times, but that was just the longest one – where I barely touched a guitar. I didn’t write any songs, I didn’t really do anything, because in my head I wasn’t allowed to or wasn’t capable. That’s where the song “Inert” comes from; it came from that period.

Personally, what are your standout songs on An Hedon?

I think “Gossamer” is probably my favorite song, potential-wise and me playing it on the guitar. It’s funny, I still think of the song as a concept and the potential that it has and what it could be even though I’ve recorded them and it’s a final product. “Ersatz” is my favorite song that’s on the album. I love playing it. I like listening to it. Then I would say “The Fear” came out a lot better than I expected. I was really pleased because I had that fear that this could go horribly wrong and be completely out of whack with the other nine songs.

Tell me a little more about “The Fear.” Why is it so different from the other tracks?

That is one of the few that is not about depression. It is specifically related to what happened in Charlottesville in 2017. I’m from Virginia, I have friends who went to the University of Virginia, which is in Charlottesville, so I spent some time there. And my first job out of college was working for the Civil War Commission, so I was very much steeped in that world of the monuments and those issues. That weekend happened to be this annual trip with my best friends where we go rent a cabin and get away from the world. And it was a strange thing, I guess following the election, I, and probably a lot of people of my political persuasion, were just kind of waiting for the shoe to drop. When Charlottesville happened, it was like; There it is, it’s happening, America’s falling apart.

It’s not that difficult for me to see a group of white men chanting and carrying torches through a southern town and feel disturbed by it. You don’t need to know that much history to be disturbed by it. So, the song is about how there are these very real emotions that people have, these angers and these fears, and what’s really scary is when they start to act on them. The second half of the song, specifically the chorus, is kind of connecting it to a different historical event. You think about Kristallnacht, things like that, and unfortunately, we experienced it in Pittsburgh with the shooting at the synagogue. It’s not an abstraction at this point. Also, part of that is some self-laceration. While these things are happening, I’m thinking, “Could I be doing more? What can I be doing? Why am I not doing anything?” So there’s a lot that goes into it.