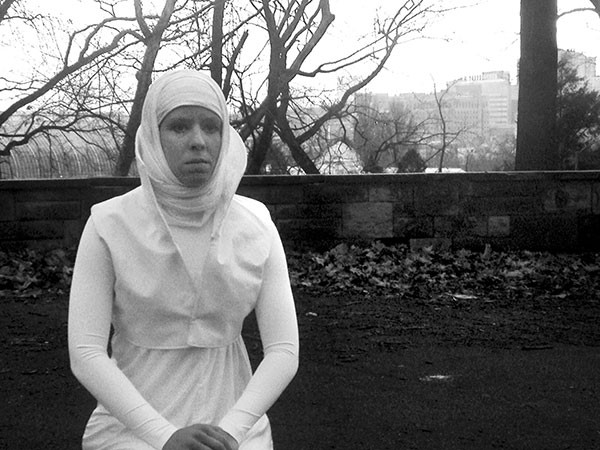 For some fans, theater means elaborate sets and musical numbers. But many of the best stories require no top hats or frills. To kick off its second season, Alarum Theatre presents the Pittsburgh premiere of Slowly, a bare-bones 2010 play that ups the ante on heartrending.

The setup is simple yet devastating: As conquering barbarians overrun an unnamed city, four abandoned women must decide what to do next. Cultural tradition dictates suicide, but left to their own devices, the decision rips the women apart. With a cruel and unwavering resolve, the loquacious Sign (Cynthia Sulemana) orders adherence to the tenets of their society. But Paper (Amanda Montoya) is unwilling to die for a conquered civilization, and jockeys to persuade young and impressionable Bell (Lauryn Thomas) to join her in embracing a new, though unwelcome, way of life. Meanwhile, Calf (Jenny Malarkey), seemingly the most level-headed of the group, harbors a plan more devastating than any of the others can imagine.

Guided by director Jordan Matthew Walsh, each performer taps into an innate part of human nature, and all four actresses captivate with their frantic and commanding performances. Playwright Howard Barker knows how to explore fear and psychological longing with dialogue that liberally mixes the pithy with the verbose. The women are eloquent and crass, abstract and raw, and those ever-oscillating emotions bring their dilemma into sharper focus.

Arrayed in white, including face paint, the actresses look equal parts earthbound and otherworldly. Abby Lis-Perlis' meticulous costumes recall aspects of both modern and ancient cultures, encouraging the audience to home in on the play's universal themes.

Like other site-specific companies, Alarum Theatre rotates locations; for Slowly, the troupe utilizes Flagstaff Hill, in Schenley Park. As with any outdoor show, especially one in a well-traveled area, there are trade-offs. While the austere staging enhances the stripped-down production, overhead jets and backfiring cars did overwhelm a few of the actresses' lines.

A philosophical sucker-punch, the play clocks in under an hour. But if you've got the fortitude to tackle this material, you'll be pondering it far longer than that.