"I took this year-long lost weekend as a chance to be prolific." 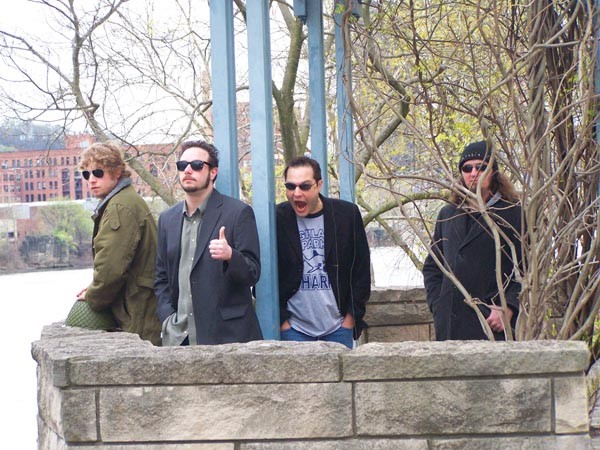 The motivation for continuing his decade-long musical experiment has been on Danylo's mind a lot recently. The Shaler native is the main creative force behind Akrasia, a loose, bluesy alt-rock band that started when he gathered a bunch of friends in a Pitt dorm room in 2002 to record an album (which they did in just two hours). Since then, they've released four more proper albums, did a two-year residency at an Oakland hookah bar, embarked on a few of tours and went through "more drummers than Spinal Tap." Danylo describes the band's sound, and overall ethos, as "slacker rock," which has somewhat muddied the notion of motivation.

"You reach a point when you know your band is not going to be on the cover of the Rolling Stone," says Danylo, 31. So, if any chance of achieving the slacker dream of making it in spite of your disinterest in making it has gone by, and if you're no longer in a band to get laid or bemoan not getting laid anymore, why continue? Again: It's been on Daylo's mind recently.

Danylo majored in philosophy at Pitt and, like most others with a BA in that discipline, has never had a degree-related job. He did financial counseling at a college and focused on the band, which has most permanently included Benji Balix on bass and Mike Buric, Danylo's childhood friend, on guitar. Each has had varying degrees of commitment to Akrasia through the years. By the turn of this decade, work and wives were eating up more of the aging friends' time.

(The name, by the way, comes from a word of Greek origin, defined on dictionary.com as a "weakness of will," a moment of "acting in a way contrary to one's sincerely held moral values." Yes, it is an awesome band name, and therefore Daylo has registered Akrasia as an LLC, to protect it from all the other philosophy majors forming bands.)

In early 2011, Danylo lost his job, and instead of immediately looking for another decided on one last hurrah.

"It always took us a while to put together an album because of other stuff," he says. "For a long time, albums were like the classic car in the garage you're restoring on the weekends. I took this year-long lost weekend as a chance to be prolific. I wanted to be like Bob Dylan in 1965."

If he wasn't here at the bar, filling his smartphone with pictures of Sidelines' monstrous Kitchen Sink Crunch Burger, admiring again its towering statute before devouring it, he was at home recording music.

The home in question is "a big old house" in Millvale that the band's most vocationally successful member, Mike Buric, bought and turned into apartments. Both Danylo and bassist Balix lived there, though Buric himself didn't. A Pitt electronics engineering grad, he was, and still is, stationed in Morgantown, W.Va., at the U.S. Department of Energy's National Energy Technology Lab, "doing shit with lasers I can't even understand," as Danylo reports it.

The period produced two Akrasia albums, People in Hell Want Ice Water and Jagoff Hearts. For Danylo, it was a chance to collaborate with everyone he knew. He was constantly sending sound files to friends in New York and Chicago for overdubs. He also, for the first time in years, went to open mics and recruited new musicians to come back to the house and record. Jagoff Hearts has 14 musicians credited on it.

It was time of renaissance for other band members as well. Buric played banjo on an album for the first time. "Living in Morgantown, I figured I'd try to fit it in by sitting on my porch in my underwear and playing the banjo," he says. On weekends, he brought those skills back to the house.

The records are grounded in Danylo's dusty descriptions of being down and out in Millvale. He references Mr. Small's, the local Pamela's and Family Dollar, and the town's general "low-rent, flood-plain, not-quite-middle-class" vibe in "Pretty Girl From Millvale." He's like a slacker Springsteen, singing about proletarian life against blues riffs, but without the sense of high stakes.

"You can hear Bill go through unemployment on these records," says Buric. "They start with considerable angst, but in the end there's a sense he likes the place he's at."

Danylo found another job (after cutting his hair short). He says he will continue with the band, having found a slacker enough reason to do so.

"I want to be sitting around a porch with Buric when he's 80 and playing that banjo, so I can't quit at 30. But as for right now, I don't know what's going to happen, which is both beautiful and terrifying."