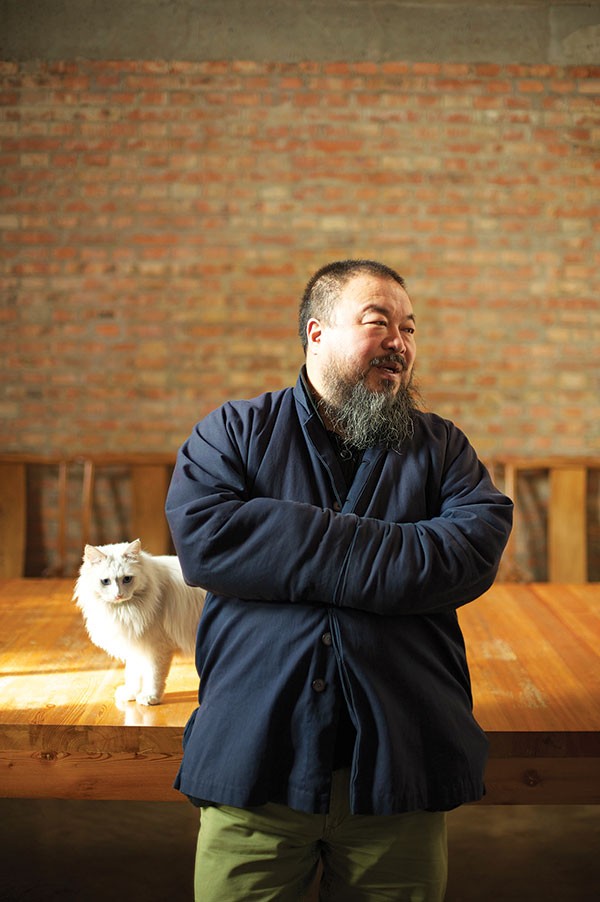 Ai Weiwei and feline friend
In English, and Mandarin, with subtitles.

Alison Klayman’s 2012 film Ai Weiwei: Never Sorry is a straightforward documentary about the contemporary Chinese artist Ai Weiwei. Arguably China’s most well-known artist, he enjoys fawning attention in the West, particularly for his pointed critiques of his homeland’s government, while in Beijing, his celebrity and influence is constantly checked by the authorities.

Klayman interviews colleagues, sketches out Ai Weiwei’s background, and focuses on the preparations for two big upcoming shows in Berlin and London. The multi-disciplinary artist works in painting, sculpture, film, photography and installation art, and famously helped design the “Bird’s Nest” stadium for the 2008 Beijing Olympics. And he’s such a prolific tweeter, with his dispatches covering art, politics and the personal, that it may be fair to claim Twitter as another of his artistic disciplines.

The film builds much of its narrative around Ai Weiwei’s quest to uncover exactly how many children died in the 2008 Sichuan earthquake. Stonewalled by the authorities, Ai Weiwei uses social networking to eventually identify more than 5,000 students, and later incorporates these names into one of several works designed to both honor the victims and reveal the government’s cover-up. The Sichuan-inspired pieces prove prime examples of how Ai Weiwei transforms the mundane — names, or children’s backpacks — into works of profound emotion and unmistakable political criticism.

In conjunction with The Andy Warhol Museum exhibit, Andy Warhol | Ai Weiwei, the film screens daily from Fri., June 3, through Aug. 28. Free with museum admission. Call for 412-237-8300 for daily times, or check www.warhol.org.

A version of this review originally appeared in City Paper in Aug. 29, 2012