"You better tell the folks in our hometown to get on the ball and put some 24/7 stations on playing the music." 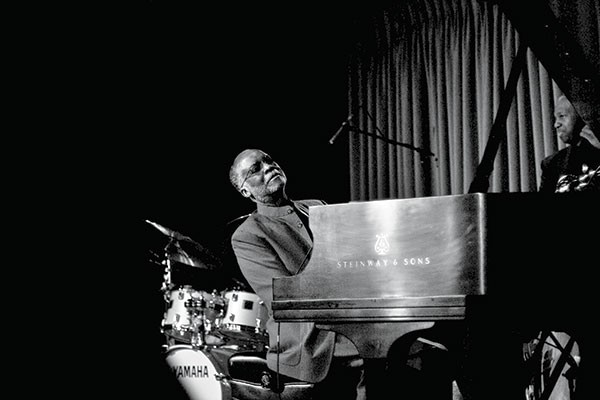 "It's not like other cities," says Ahmad Jamal, the 82-year-old jazz pianist. "Pittsburgh is phenomenal; that's the difference."

Jamal was born in the city's East End, where he attended Larimer Elementary and Westinghouse High School, just a few years behind fellow jazz-piano greats Erroll Garner and Dodo Marmarosa. At 17, Jamal left his hometown, and he's been touring the world since, embraced as a pioneer for his style of piano. Later this month, he returns home to headline MCG Jazz's Pittsburgh Jazz Legends Party, a fundraiser.

Jamal began learning to play music at an early age.

"I was playing at 3 years old, so when I went to kindergarten, the teachers fainted," he says with a laugh.

Throughout his childhood and teenage years, Jamal was surrounded by a thriving jazz scene in Pittsburgh. There were professional educators such as Mrs. Dawson, his first music teacher, whom he began seeing at 7 years old, and Carl McVickers, who led a variety of orchestras at Westinghouse. But some of Jamal's toughest critics and greatest teachers were his peers at the jazz clubs throughout the city.

"I was playing with Honey Boy Minor and guys 60 years old when I was 11, because I knew the repertoire," he explains. "We had the musicians union. The union had a [16-year-old] minimum age, and I joined the union when I was 14."

"I escalated my age," he explains with a laugh. "And the president was from Homewood, so he knew I wasn't 16."

At a time when segregation limited opportunities for African Americans, Local 471 of the American Federation of Musicians in the Hill District became a central location for the representation of African-American musicians in Pittsburgh. The Musician's Club, which was located on Wylie Avenue, provided a stage for such artists before being torn down in the 1950s to make way for the Civic Arena.

"We had historic jam sessions there with Ray Brown; some of the other noted players would come through ... that's where they'd go," Jamal says. "They'd go to 471, where we would have these wonderful, wonderful learning experiences. It was a wonderful thing that transpired there, and that went on for years until they tore it down.

Currently there are several venues and organizations that are regularly promoting jazz in Pittsburgh: Roger Humphries at CJ's every Thursday; Little E's, and Andys at the Fairmont, Downtown; the Pittsburgh Cultural Trust's annual JazzLive Festival; and the Pittsburgh Symphony Orchestra. And, of course, there is the Manchester Craftsmen's Guild, which brings several prominent jazz figures to the city every year, while honoring local legends at its annual Pittsburgh Jazz Legends ceremony.

But on the whole, Jamal doesn't think jazz has the reputation today that it ought to.

"You should see Duke Ellington every day on the tube, and so forth with Charlie Parker. It's the only art form that we have developed here in the United States besides American Indian art, so it should be treated as such. That's why you have people who know this raising money for buildings like the Jazz at Lincoln Center building ... the Allen room, Frederick Rose Hall and the Coca-Cola Club — Wynton Marsalis was very instrumental in putting that together. He comes from one of the most phenomenal [jazz cities], New Orleans. So those people know what the contribution of this art form has been for the entire world."

"What do we have in Pittsburgh that still plays American classical music, also known as jazz? What stations play jazz?" he asks.

The answer is none, in terms of local radio playing jazz music around the clock. Since 90.5 WDUQ changed its format from jazz to news talk in 2011 and became WESA, a listener might sparingly find jazz there, or on one of the college stations that barely reach beyond city limits. Pittsburgh Public Media, a group formed in the wake of the WDUQ sale, and which owns the WVBC-FM 88.1 signal, hopes to bring the full-time jazz format back to Pittsburgh. Right now, the station is broadcast from near the border of Pennsylvania and the West Virginia panhandle, and barely reaches the Pittsburgh area.

"This is the music that built America, that built the industry and inspired The Beatles, you know," says Jamal. "Look at Berklee, the college in Boston. You've got thousands of kids coming from all parts of the world to find out about that music. So you better tell the folks in our hometown to get on the ball and put some 24/7 stations on playing the music."