After years of failed attempts, I saw Radiohead and it was good

Prior to leaving for a summer abroad in London in 2008, I met with a guy named Jeff who loved soccer scarves.

He was my student advisor at Pitt. Our meeting was intended to prepare for my trip and explain how to best make the most of it. In a barrage of good-intentioned clichés, he told me how it was vital to really “grab life by the horns” over there, and gestured to the scarves covering his office walls to illustrate his point.

Jeff had collected them from his travels. He encouraged me to pick a kind of souvenir and buy one from each place on the trip. It didn’t have to be a scarf, I was assured. Foreign tchotchkes might seem cheap and kitschy on the shelf, but they would evolve to become something symbolic. Studying abroad was important. It could change the direction of my life if I grabbed enough horns.

I’m not sure I hit my quota. Here’s what did happen …

I took classes, bought two sweatshirts and ate a lot of doner kebab. I took photos at Tate Modern, was briskly told to delete them, asked if I could “just leave” and the docent said “sure.” I got too stoned in Amsterdam, ate too much in Paris, and finally saw Radiohead.

I had been taking a stab at that last one since I was a tween. As an angsty kid, I was seduced by “Creep.” Listening to The Bends made me want to learn guitar. Watching the video for “Paranoid Android” made me want to buy a beanie and chop down street lights. From OK Computer on, I bought every Radiohead CD on the day of its release, which is to say that once every year or so until 2004, I begged my dad to “lend” me $15 and drive me to Tower Records on Tuesday nights.

Seeing Radiohead in concert isn’t so easy. This is not a band that often tours the States. I had closed in on tickets a few times, always falling through. Once, a friend landed tickets to a New Jersey-show on the Amnesiac tour, and a friend of his parents tried to secure extras. A few hours before the show, the call for which we’d be waiting happened. “Mmm hmm … OK.” After he hung up, my friend turned to us and said, “Only I ... get to go.” What a prick.

Then on June 25, 2008, I was leaving my classroom in London and saw a piece of loose-leaf paper hastily pinned to a bulletin board which read, “RADIOHEAD TICKET, TONIGHT, £90,” and a phone number. It was the In Rainbows tour. Victoria Park, which is like London’s Central Park with classier pigeons. It was eight hours before the show.

I didn’t have the money; £90 was $180 in U.S. currency, and I was pretty sure back then that no one actually had $180 at any given moment. But seeing something so seductive on something as flimsy as a loose-leaf piece of paper, I figured this was exactly what Jeff had talked about. Soccer scarf or not, this was something I could do on the fly, something I might not ever get the chance to do again. Nobody had ripped down the paper. I was meant to see Radiohead. Only I would get to go.

OK, getting all dewy-eyed about a Radiohead show on a study-abroad trip reeked of privilege and tacky narcissism. But spontaneously buying that ticket and seeing that show clarified something about expectations and Jeff's seize-the-day spiel. Things like study abroad or college in general, when young people are told that it’s the most important, most fun, life-changing experience they’ll ever have, can feel more like pressure than freedom. I’ve always folded under expectations for high-stakes fun. I don’t think I’m alone in that.

Had I purchased the ticket weeks before, pressure to have fun would have spoiled everything. It would have all just been too much: the years of failed Radiohead sightings; the chance-encounter with the ticket; the sunset start-time; the location; the setlist. By falling backwards into the situation, stakes were appealingly low, and I was able to enjoy it without feeling like I had to.

The specifics of the concert are a little hazy. Here’s what did happen …

On the way there, my backpack caught in the doors of the tube and every passenger in the car jumped to pull me in (Brits are mad nice). Radiohead plays a lengthy 25-song set, unexpectedly opening with “Reckoner.” There were two encores, including “Karma Police” and “Paranoid Android.” Thom Yorke wore fabulous red jeans.

The show didn’t change my life so much as it happened during it. I remember it fondly, which is enough for me. 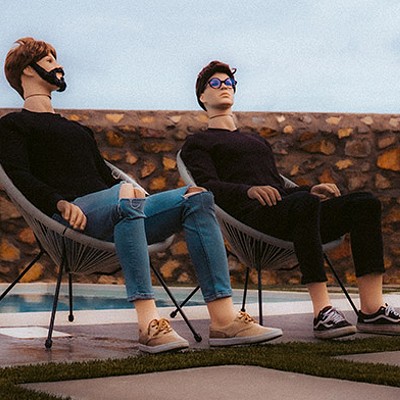