After the Win: DOMA's demise is a huge victory for the LGBT community, but what does it all mean? | News | Pittsburgh | Pittsburgh City Paper

After the Win: DOMA's demise is a huge victory for the LGBT community, but what does it all mean?

"DOMA is unconstitutional and that's great, but it opens up a Pandora's Box of questions." 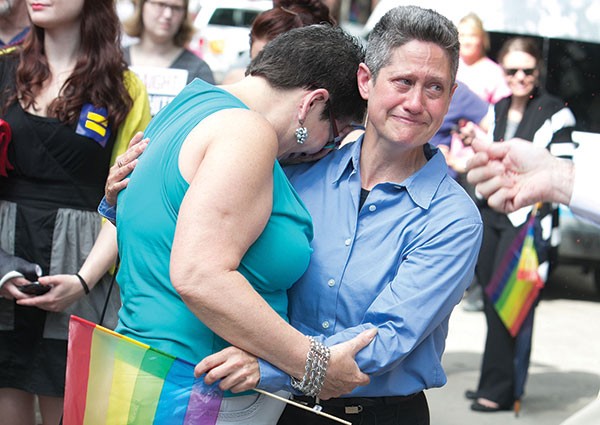 Photo by John Colombo
Bystanders react with tears to the Supreme Court's ruling to strike down part of the Defense of Marriage Act during a June 26 rally on Liberty Avenue.

As one man put it as he sprang around Liberty Avenue sprinkling glitter, June 26 was "a great day to be gay."

Indeed, the Supreme Court of the United States delivered two major victories for LGBT rights. In a 5-4 ruling, it dismissed a case concerning the constitutionality of California's anti-same-sex-marriage referendum, Proposition 8. That decision allowed the state to resume issuing same-sex marriage licenses on June 29. And in another landmark 5-4 ruling, the justices invalidated a section of the Defense of Marriage Act, which had previously denied federal recognition and benefits to legally married same-sex couples.

As those decisions were announced, the joy among the 500 or so spectators along Liberty Avenue Downtown was palpable. Cheers erupted as a speaker on stage blurted out the announcement. Rainbow flags waved vigorously in the street. City Councilor Natalia Rudiak took the stage and, with tears in her eyes, stated what the crowd on Liberty Avenue already knew: "Love is love," she shouted.

And then there were questions.

What did the rulings mean for same-sex couples married in one of the 13 states plus Washington, D.C., that allow it?

What do they mean for couples who live in a state where their marriage isn't recognized?

What benefits, if any, will there be for LGBT Pennsylvanians?

The answers aren't so clear, at least not yet.

The DOMA decision "is a good step forward, but I think people have to realize there is a lot of baggage that goes with that step forward," says Anthony Infanti, a professor of law at the University of Pittsburgh. "DOMA is unconstitutional and that's great, but it opens up a Pandora's Box of questions."

There are more than 1,100 places in federal law where a person's marital status can determine legal protections or responsibilities. That means there are conceivably 1,100 places where there will be questions on what rights legally married same-sex couples are entitled to. The list of benefits is broad: from Social Security benefits and student aid to immigration rights and spousal benefits for veterans.

At the heart of the DOMA case were taxes: Petitioner Edith Windsor had to pay $363,053 in taxes after the 2009 death of her wife, Thea Spyer, because Windsor was denied a tax exemption for surviving spouses. Windsor sought a refund from the IRS and was denied. She sued, questioning DOMA's constitutionality.

"DOMA's principal effect is to identify and make unequal a subset of state-sanctioned marriages," Supreme Court Justice Anthony Kennedy wrote in the majority opinion, supported by justices Sonia Sotomayor, Elena Kagan, Ruth Bader Ginsburg and Stephen Breyer. "It contrives to deprive some couples married under the laws of their [s]tate, but not others, of both rights and responsibilities, creating two contradictory marriage regimes within the same state. It also forces same-sex couples to live as married for the purpose of state law but unmarried for the purpose of federal law, thus diminishing the stability and predictability of basic personal relations the [s]tate has found it proper to acknowledge and protect."

But it seems same-sex couples are likely to face similar uncertainty for some time to come.

"What [the DOMA ruling] says is we'll defer to the state in determining who's married," says Infanti. But that raises a new question: "Which state when? ... You can come up with all sorts of different scenarios."

A Massachusetts couple married in their home state, for example, conceivably would receive state and federal benefits, Infanti says. But Kennedy's majority opinion did not affect DOMA's Section 2, which allows states to ignore same-sex marriages performed legally elsewhere.  So what if that Massachusetts couple moves to Pennsylvania, where a statewide Defense of Marriage Act invalidates any same-sex marriage performed beyond state borders?

Such a couple's marital status could be "off and on," Infanti says. "How's the federal government going to treat that marriage?"

Who answers that question remains to be seen.

"Different federal programs have different standards for how they determine whether your marriage is valid," says Kate Paine, a litigation associate at Buchanan, Ingersoll and Rooney PC who covers DOMA and Prop 8 issues for the firm's Non-Traditional Couples and Families blog. Some rules are determined by "place of celebration" — where the marriage license was actually issued. Others look at the place of domicile or residence.

"There is no one rule across all federal agencies," notes the National Gay and Lesbian Task Force in a series of fact sheets.

Some policy changes may have to be carried out by Congress, Infanti notes. Others could be mandated by the executive branch. On the day of the decision, President Barack Obama welcomed the decision and pledged that his administration would "review all relevant federal statutes to ensure this decision, including its implication for federal benefits and obligations, is implemented swiftly and smoothly."

But Infanti says same-sex couples may have to continue pressing for their rights in court. When it comes to securing marriage benefits, he says, "The question is who's going to do the heavy lifting. In the past, it's been the same-sex couples."

One area in which Pennsylvania couples can benefit almost immediately is immigration, legal observers note. "The federal government will allow the American citizen to sponsor the foreign partner immigration's status based on where you're married," says Paine. "So if someone from Pennsylvania has a same-sex partner from Brazil and they go to New York to get married ... it doesn't matter if they live in Pennsylvania."

But beyond that, same-sex couples are being advised to consult attorneys and accountants until the ramifications became clearer. And at least for now, equality advocates are viewing the DOMA and Proposition 8 rulings as symbolic.

"It was still a momentous day," says Jim Sheppard, president of the Steel City Stonewall Democrats. "No one can take that away."

"Any day that a really bad, discriminatory, mean-spirited law gets struck down by the U.S. Supreme Court is a good day," agrees Ted Martin, executive director of Equality Pennsylvania. "It's a bittersweet moment, because both rulings by the court mean nothing for Pennsylvania."

If anything, he adds, the decisions "highlight how little we actually have here."

Indeed, while state Rep. Dan Frankel (D-Squirrel Hill) says marriage rights in Pennsylvania "are inevitable," they are far from imminent. Even basic protections have been kept out of reach: Pennsylvania has no law prohibiting discrimination based on sexual orientation, gender identity and expression.

Frankel, who co-chairs the state House's LGBT Equality Caucus, has been trying to pass House Bill 300, a bill that would bar LGBT discrimination in the same way state law already prohibits discrimination based on race or gender. Even in famously conservative Pennsylvania, Frankel notes, an anti-discrimination measure polls high "in every region."

"People are just incredulous you can fire someone [because of] sexual orientation," he says.

And equality advocates are using the DOMA moment as leverage to point out that injustice. "We've suddenly been handed the perfect podium to talk about it," says Martin, who's helping push Frankel's legislation.

Metcalfe, who has repeatedly sought to place same-sex marriage bans in the state constitution, came under fire from Republicans and Democrats alike. And by press time, Frankel said that since June 26, 10 more co-sponsors — including two Republicans — signed onto the bill.

Both the Supreme Court decisions and Metcalfe's remarks have "added energy to this," Frankel says. "I think Daryl helps our cause to some extent. ... Daryl represents an extreme and certain level of hatefulness, you might even call it bigotry, and helps diminish his standing as an opponent and helps diminish those like him."

Frankel has yet to formally introduce House Bill 300. Ordinarily, such a measure would be assigned to the State Government committee, which is chaired by ... Daryl Metcalfe. But Frankel hopes Speaker of the House Sam Smith will assign it to another committee "so it will get a fair shake."

Equality advocates are working on a host of other LGBT protections at the state level, including a bill to eliminate inheritance tax for domestic partners. Another bill would classify as hate crimes any crime targeting a victim based on sexual orientation or gender identity. Such crimes are punished with stiffer penalties.

There's even a marriage-equality bill circulating, sponsored in the Senate by state Sen. Daylin Leach (D-Montgomery County) and soon to be introduced in the House by Sims and Steve McCarter (D-Philadelphia). Although such bills have failed in the past, Frankel says reintroducing them helps build momentum for eventual passage.

"It's an important statement to make that there is a vehicle in the House and Senate for people who support marriage equality," he says. "It's at least one tool we can use to make elected officials accountable. It's a marker for the future."