After the end of Ween, Dean Ween carries on in longtime project Moistboyz

"We have five albums out! That's not a side project; that's more than most bands ever do." 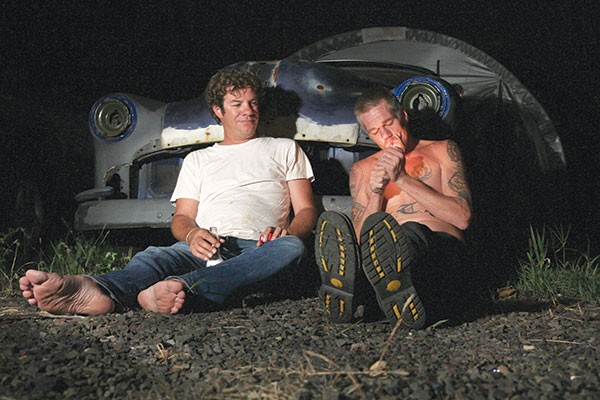 Mickey Melchiondo Jr. has been in the game for a long time.

Perhaps better known by his stage name Dean Ween, Melchiondo is an alternative rock guitarist and multi-instrumentalist. He was a founding member and lead guitarist of alternative-rock band Ween, which gained a cult-like following in the '90s for its experimentation and humor. Ween broke up last year when lead singer Aaron Freeman (Gene Ween) decided to focus on his solo career, but Melchiondo has stayed busy, and now the former Ween guitarist is back with a new album from his other longtime band, Moistboyz.

Moistboyz is Melchiondo and lead vocalist Guy Heller — as well as a changing lineup of friends and musicians that tours with them. It's been nearly 20 years since their first release as Moistboyz and seven years since the last release, but when the two musicians were reunited for a special show last year, something clicked.

Heller is now based in Austin, Texas, but headed up to New Hope, Pa., where Melchiondo lives, to play a show celebrating the 40th anniversary of a local bar and music venue. Shortly after that show, the duo began work on the new album, and Moistboyz V (also known as Medusa) was released in early November.

Medusa showcases a wider range of musical influences than previous Moistboyz albums. The heavy punk rock of the band's earlier albums is still there, but this time it is infused with some Southern twang and more variety. "Each record is a natural progression from the last one," Melchiondo explains. "You don't ever want to go backwards."

Indeed, the band has come a long way since forming in 1991, when Melchiondo started working with Heller. In the early days, they just messed around, constantly writing and recording songs and then sending them to friends. But the group really took off when it released its debut EP in 1995. "I had no idea that 22 years later we'd be on our fifth album, touring the country," recalls Melchiondo. "I'm really glad about it."

For Melchiondo, Heller has been an ideal collaborator and the perfect person to bounce ideas off of. "We see eye-to-eye on rock 'n' roll, Guy and I," says Melchiondo, who calls Heller one of the most talented musicians he's ever known.

Together, they have become known for their decidedly politically incorrect lyrics, which are almost exclusively written by Heller, as well as their lively stage presence. But they've also become more refined with age.

The new record is a "high point" for the band, according to Melchiondo; it features some of Heller's most honest and autobiographical lyrics and impressive instrumental work by the rest of the band. On the album, Melchiondo is primarily present on guitar, though he also played drums and bass.

But the high point hasn't come without effort. Melchiondo and Heller put a solid year of work into this album, and you can hear it in the final product. They threw out as many songs as they included for the sake of cohesion, and focused on refining the best songs of the bunch. "It's very old-fashioned, the way we do things. It's the only way we know how to do things, and it takes a lot of work and time," said Melchiondo.

Medusa is the band's first release since the Ween breakup, but Melchiondo is quick to point out that Ween's existence never changed anything about Moistboyz: "People will always call it a side project," he says, "but we have five albums out! That's not a side project; that's more than most bands ever do."

In between recording and touring, Melchiondo, a licensed boat captain, runs charters along the Delaware River and off the Jersey Shore. He's always loved fishing, and the pastime gives him a chance to get away and write songs. The New Hope music community also continues to inspire his music; he plays two or three nights a week at a local bar with different combinations of friends and performers.

Melchiondo is also working on his first official solo release, Mickey, which was put on the back burner when Moistboyz picked up again last year. But he has already recorded many new songs — most with a heavier guitar focus than you might hear on a Ween record — and is hoping to finish the album next year.

Right now, though, Melchiondo is focused on Moistboyz. The band's tour kicks off on Dec. 4 — appropriately, the first show is at the New Hope, Pa. bar where the group got its start — and the Moistboyz will be playing in Pittsburgh on Dec. 10. The touring lineup currently features Melchiondo and Heller alongside Nick Oliveri ("the ultimate Moistboy," according to Melchiondo), Hoss Wright and Stephan Haas.

"It's a good vibe, we're all friends and everybody rocks really hard," said Melchiondo. "There's not a lot of bands that bring it as hard as we do, and I don't mind patting myself on the back and saying that. You'll go home satiated."

Song Spotlight: "Half My Fault" by Ghost Hounds