"I think this is the perfect showcase of two bands who sound nothing alike but both epitomize the Pittsburgh DIY music spirit to me." 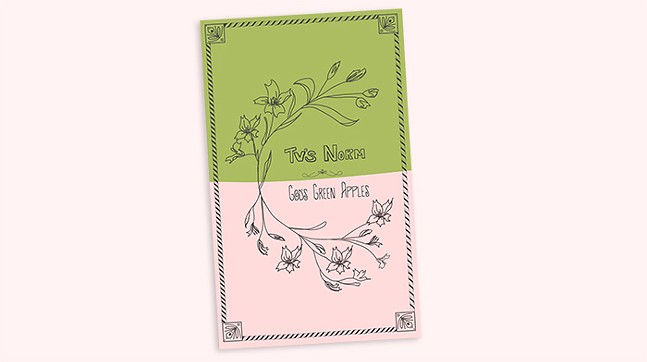 Pittsburgh bands TV's NORM and God's Green Apples are on opposite sides of the alt-rock spectrum. And that's exactly why Bobby Smith, owner and founder of Lemon Tree Records, paired the two together for Lemon Tree Split Tapes vol. 2.

"I think this is the perfect showcase of two bands who sound nothing alike but both epitomize the Pittsburgh DIY music spirit to me," says Smith.

Released Sept. 18, the split features six songs, three from each band, that Smith calls "fun without feeling like a gimmick."

"TV’s NORM is hilarious in everything they do. From their name to the promotional videos that they produce (at a high quality) these dudes are hysterical," says Smith. "But their music hits hard. It’s catchy and fun while still being edgy. Meanwhile, God’s Green Apples are just fun. I always think of them as a punk rock Mouse Rat (or whatever name you want to use from Parks and Rec). This band just sounds like drinking a beer with your friends on your stoop. So if there is one thing that binds these two bands I think it is just fun."
Besides providing entertainment, Smith created the split series — which debuted in February with indie punk rock band Booze Radley and lo-fi punk musician Ghost Music — to allow Lemon Tree to work with multiple artists while operating with limited resources.

"This is a way for me to help promote and distribute music from bands and people that I really enjoy without doing the full-scale album release," says Smith. "This way I get to work with more artists and hopefully it can help lead to bigger things for everyone involved."

Smith's initial plan was to release four splits bi-monthly starting in March, culminating with the release of a compilation in November. Unfortunately, circumstances beyond the label's control made that timeline impossible.

However, Lemon Tree still plans to release more splits in the coming months and beyond.

"Our goal with anything that we do musically is to help promote good people doing cool things. We really love the idea of working with as many local artists as possible here in Pittsburgh," says Smith. "However, we have made some great friends in other cities (like Booze Radly from Philly or Always Tired from Brooklyn) who we have worked with in the past, and others we intend to work with in the future. At the end of the day we really care about the music, but who the musicians are is even more important."

Lemon Tree Records has been pretty dormant the few months, as the label had plans that no longer seem feasible, but hope to be more present and social in the future.

"So if anyone ever wants to chat please send us an email at lemontreerecs@gmail.com or send us a message," says Smith. "We’d love to connect and hang out at a show or a pick-up basketball game or let our kids or pets hang out (if you’ve also got either of those)!"