After finding a place for himself in Pittsburgh, venerable saxophonist Richie Cole finds reinvention on a new record | Music | Pittsburgh | Pittsburgh City Paper

“I’ve already proved myself and what I can do. Now I just say what I’ve got to say.” 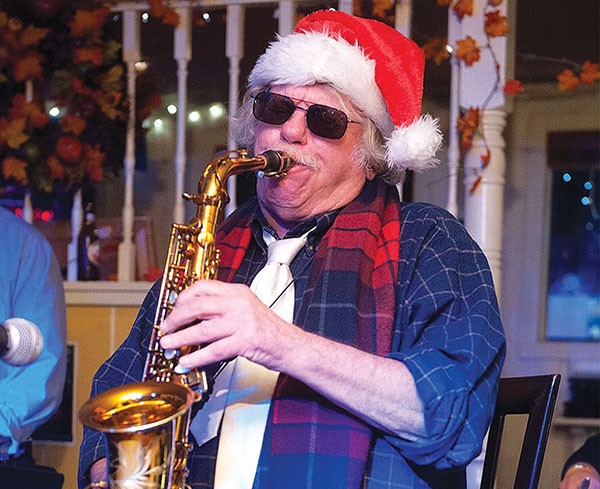 Duran’s Restaurant, in Carnegie, looks more like a neighborhood sports bar than a jazz club, with a few TV screens above the bar. But anyone strolling up East Main Street on this particular night might think otherwise. The building’s front window can’t contain the sound of a fiery alto saxophone, blowing the normally mid-tempo “Almost Like Being in Love” at a fleet pace. Inside, 20-odd patrons sit in rapt attention as, a few songs later, Willy Wonka and the Chocolate Factory’s “Pure Imagination” slows down the tempo but not the momentum. In fact, it gets downright blissful, even when the saxophonist quotes a phrase from “The Candy Man” in his solo.

Richie Cole, the man with the horn, lives a short walk from Duran’s. But he’s more than just a guy from the neighborhood making a gig at his local haunt.

A New Jersey native, Cole cut his teeth in the big band of Buddy Rich, a drummer who would let musicians know in no uncertain terms if they sounded terrible. He also toured with Sonny Stitt, a fellow alto saxophonist who could be as brusque as Rich. There was also a working relationship with vocalist (and Pittsburgh native) Eddie Jefferson. Then there’s the Cole discography — which numbers somewhere around 50 — as well as performances as a leader in places as far-flung as St. Petersburg, Johannesburg, Paris and Tokyo. In contrast to the numerous Pittsburgh-born jazz legends who left town to seek their fortune, Cole moved to Pittsburgh. Two-and-a-half years ago, then in his mid-60s, he came to be with family, and wound up rejuvenating his career.

A few days after his stand at Duran’s, Cole is holding court at the same bar, joking with patrons who all know him by name. “There’s an interview going on. Don’t get too yappy,” he tells one friend, punctuating the command with a raspy laugh.

When asked about the way he renders ballads, Cole has an immediate explanation. “I don’t play the saxophone. I sing the saxophone. I blow the saxophone as a vocalist. I tell a story. ‘I Left My Heart in San Francisco’ does not have a trumpet solo, a piano solo and a bass solo. It would ruin the whole thing. It’s a message, a short story. You want a novel, you listen to John Coltrane,” he says, laughing again. “I’ve already proved myself and what I can do. Now I just say what I’ve got to say.”

That singing quality is getting noticed beyond the city limits thanks to Richie Cole Plays Ballads and Love Songs, a CD that happened by accident. Studio time had been booked for the Pittsburgh Alto Madness Orchestra, a big band made up of local musicians who play Cole’s original material. (“Playing the saxophone is a hobby. What I really like to do is spend 12 hours a day sitting around writing music,” he admits.)

When some members of the horn section couldn’t make the recording session, bassist Mark Perna suggested using the studio time to record as a quartet with guitarist Eric Susoeff and drummer Vince Taglieri. Treating the session like a live performance, Cole called 11 tunes, eight of which were ballads.
Things went so well that they recorded three more ballads at the start of the following orchestra session. Clearly, they had a concept album completed, unlike anything in Cole’s vast catalog.

The selection features a few well-known numbers, but leans toward more obscure works such as “Spring Can Really Hang You Up the Most,” “Sarah” — an homage to vocalist Sarah Vaughn — and “Emily,” a soundtrack song which Cole’s mother, also named Emily, always requested when she was in the audience.

The most unique choice is “The Internationale,” the national anthem of the Soviet Union, with which he has a strong connection. “I was doing a concert in St. Petersburg or Moscow, I forget where. This was just when they broke up the Communists in Russia [around 1991]. I’ve been going to Russia every year. I love going to Russia, man.

“The promoter said, ‘I know you’re known for playing “The Internationale,” but times have changed. We’re no longer Communists. So that song is forbidden. Do not play that song,’” Cole says, letting out that laugh again. “Don’t tell me not to do something!”

Not only did he play the anthem, he incorporated the melody of “America the Beautiful” into it. Looking into the audience, he noticed that Russian soldiers seated in the crowd were crying. “At the end of the story — silence. I was waiting to get the hook, like at the Apollo. Take me to the gulag. Then all of a sudden, the audience erupted in screaming and yelling,” he says. “That was my contribution to world peace.”

Ballads and Love Songs was officially released in late October on RCP, Cole’s own label, with Perna handling production work (see sidebar). Nationally it’s already getting recognition, including a four-star review in an upcoming issue of downbeat. “I think the ballad thing hit at a very nice time,” Perna says. “No one’s really heard from him for a while. Second, the ballads are a thing he’s not really noted for. He’s known as a fiery bebop guy. He’s making this grand re-entrance as sort of a reinvented kind of guy.”

However, the saxophonist had already released one CD since his relocation, last year’s Pittsburgh, which opens with a sincere original called “I Have a Home in Pittsburgh.” Never one to rest on his laurels, Cole is working with Perna on the Alto Madness Orchestra studio album, The Many Minds of Richie Cole, which will be released in March.

Currently, Cole is also excited about Have Yourself an Alto Madness Christmas, a holiday RCP release, with features the big band and a vocal group which he calls the Fabulous Al-Tones. “It’s like my Pittsburgh Manhattan Transfer,” he says. That CD release and performance comes this weekend, a day after the local release party for Ballads and Love Songs.

With a busy performance schedule coming together, Cole couldn’t be happier. “After 68 years,” he says, “I’ve found my Shangri-La in Pittsburgh.”

Assembled by bassist Mark Perna, the Year of the Don series offers an in-depth look at the work of tenor sax-player Don Aliquo