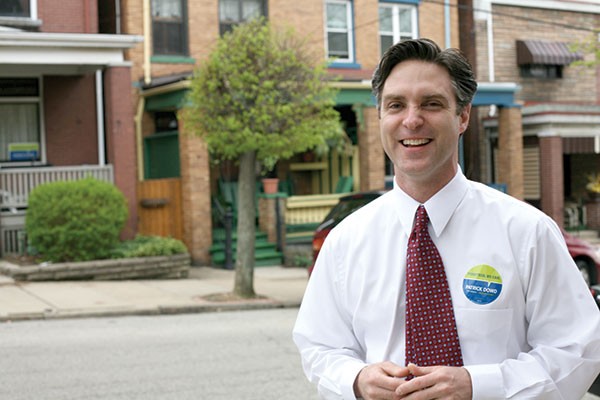 When Pittsburgh City Councilor Patrick Dowd formally resigns his District 7 seat this summer, as he announced he would last week, the area he' s represented for six years will be temporarily disenfranchised.

Dowd announced on June 18 that he will be resigning his seat sometime in July to take a job as executive director of a newly formed nonprofit, Allies for Children. That will leave District 7, which encompasses Highland Park, Lawrenceville, Morningside, Polish Hill, Bloomfield and parts of the Strip District, without a formal voice on city council until a special election for his replacement is held in November.

"I' m sure there will be issues that come forward legislatively," Dowd says, adding that it will be the council committee chairs and council president's responsibility to ensure that District 7 voters are heard. "I don't think there is anything that will suffer."

There are no written policies about how a district should be represented when a seat is vacant, says City Clerk Linda Johnson-Wasler. Instead, the details of the transition period are left to the discretion of the council president, currently Darlene Harris.

"We' re still crossing t's and dotting i's," says Dowd, who met with Harris last week to discuss the transition. "I'm not going to submit my letter of resignation for awhile now — probably not until the day before I actually resign."

Council President Darlene Harris declined to discuss specifics of that conversation, saying she is still waiting for Dowd to submit his resignation. But she notes "[t]his has happened in numerous districts" over the years, and says she doesn' t plan to stray from those precedents.

No one will step in as a proxy vote for Dowd, she says. Instead, council will officially be made up of eight members, and will still need five votes to pass legislation.

Day-to-day operation of District 7's office, meanwhile, will likely continue to be carried out by its current staff. Two full-time and one part-time staffer will handle constituent calls and local issues like zoning notifications and liquor-license approvals.

Several community leaders are being rumored as possible contenders to replace Dowd. Among them are Tony Ceoffe, son of District Magistrate Tony Ceoffe; state Sen. Jim Ferlo; and Lauren Byrne, executive director at Lawrenceville United. As of press time, Ceoffe especially seemed to be considering a run, but none of the three would either confirm a bid or rule one out.

Many neighborhood leaders say they aren't terribly worried about the transition.

"I think we' re going to be OK," says Joey Vallarian, president of the board for the Bloomfield Development Corporation.

Bloomfield was added to District 7 as part of the city' s redistricting — a change Vallarian says parallels his organization' s own. "We are in the process of revamping our entire organization," he says, adding that it will take awhile for any new initiatives to reach the council level. "We' re really just getting started."

Lisa Schroeder, CEO and president of RiverLife, says she isn' t concerned about anything falling through the cracks. Dowd had been a strong advocate for the group, especially in a debate related to a Buncher Company proposal to redevelop parts of the Strip District along the river.

"Our plan is to keep working with the entire council," she says. "We expect the whole area will remain a priority for all elected officials."

As for Dowd, he says he feels good about leaving such projects in the hands of his colleagues — particularly now that Bill Peduto is the Democratic nominee for mayor. Dowd and Peduto were sometimes at odds during Dowd's stint on council, but Dowd endorsed Peduto's mayoral bid, and the two have been allies on some high-profile issues.

"There' s now a stronger voice in town," Dowd says.