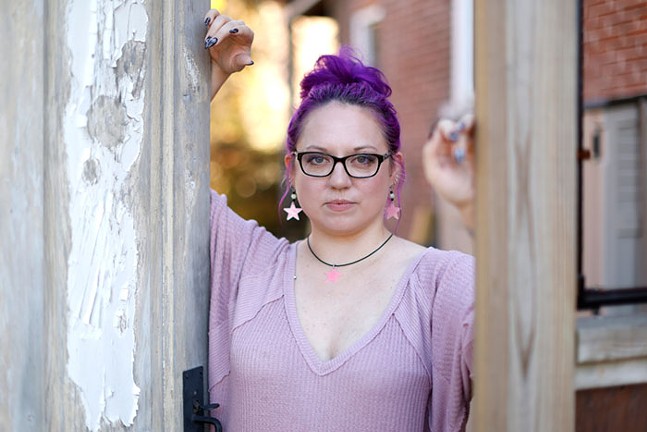 In the wake of the U.S. Supreme Court decision overturning Roe v. Wade, a pattern began to emerge across the country. In the months that followed the June ruling, medical providers reported noticeable upticks in people seeking voluntary sterilization procedures as fears were stoked that access to abortions and birth control would become far more limited or altogether unavailable.

While the focus has been on states like Texas, Florida, and Ohio, where laws restricting abortion have taken effect since June, Pennsylvanians are also showing apprehension. Despite abortion still being legal in the state, residents have already undergone or plan to undergo more permanent forms of birth control in response to attacks on reproductive rights. And Pittsburgh is no exception.

Pittsburgh City Paper spoke with several local residents about the circumstances that led them to pursue sterilization, namely salpingectomies – a surgical procedure where one or both fallopian tubes, which carry unfertilized eggs from the ovary to the uterus, are removed – and vasectomies, as a way to protect themselves and their partners from the burden of unwanted pregnancy, and to avoid dealing with a system that they believe puts patients, particularly women, at risk.

For Adrie Rose, a Pittsburgh-based sex worker and freelance writer, the Dobbs v. Jackson Women’s Health Organization ruling that overturned Roe v. Wade sealed a choice she was already mulling over. In a phone interview with City Paper, Rose describes how she saw many women in her family struggle with reproductive health issues, including ovarian cancer and polycystic ovary syndrome.

She says her mother, who suffered from fibroid tumors, opted for a salpingectomy. Rose says she decided to follow in her mother’s footsteps.

“So, you could say that, when it comes to reproductive health, I'm very much a sort of ‘burn it all down’ approach,” Rose laughs.

Rose had the salpingectomy in October at UPMC Magee-Womens Hospital.

Originally, Rose says she had opted for an intrauterine device (known as an IUD) as a longer-term form of birth control. When she began having health issues, and had the device removed, she and her gynecologist decided to explore other options.

“Especially because I am a sex worker, she suggested that I look into permanent sterilization, because my partner is disabled and he and I both decided that we don't want children,” she says.

Like Rose, Kate Schaich and Kristin Killmeyer have also opted for salpingectomies in the midst of what they see as a dangerous political climate for reproductive rights, even in Pennsylvania where abortion and birth control remain legal and protected. They all point to the advancement of anti-abortion candidates like Mehmet Oz and Doug Mastriano as especially concerning.

Killmeyer, who is scheduled to undergo a salpingectomy at the end of November, says in an email interview, “Several of my friends and peers have gotten this procedure done already. Once Roe v. Wade was overturned, it seemed like many people I know rushed to their gynecologists to talk about their options.”

Killmeyer says she never wanted children and, in 2015, even asked her gynecologist for a tubal ligation. While she never pursued that surgery, a salpingectomy seemed like a better alternative, she says, to other forms of birth control she had used, including an IUD. She also wanted to get off the high-estrogen birth control she had been taking for almost 20 years after being informed that it increased her risk of stroke.

In a phone interview, Schaich says she got one of the “Trump IUDs,” a term given to devices inserted either right before or after the former U.S. president took office. Before then, she had been prescribed the NuvaRing, a monthly form of birth control, but became concerned after having problems with her insurance.

“And they were like, ‘We don't want to fill it when it's supposed to be filled,’” says Schaich, adding that, at the time, she had been hesitant to get an IUD. “Then Trump got elected. And I was like, okay, this is the time. Because I didn't know what he was gonna do. I didn't want kids. I've never wanted kids. And I was like, man, if I get pregnant, I'm screwed.”

She underwent a salpingectomy at UPMC Magee-Womens Hospital in July and recalls the process as being “super easy.”

“I had a really good experience with the surgeons there,” she continues. “Everyone was super nice.”

Rose and Schaich both describe how the surgery only required a small incision and a relatively short recovery time of up to a week. In terms of cost, Rose says her surgery was completely covered by insurance. Schaich says she ended up paying around $450 for her procedure.

Salpingectomies are not the only form of voluntary sterilization being performed. Vasectomies, a scrotal surgery that cuts the supply of sperm in semen, are also being sought.

Brandon Orozco says he got a vasectomy in September 2021 in preparation for what he viewed as the very real possibility of abortions becoming banned. “I think it was pretty clear that, you know, there was a movement to repeal Roe v. Wade, for years and years and years,” he says. “But with the new makeup of the Supreme Court, that seemed almost like an inevitability.”

He describes getting the vasectomy as “seamless,” adding that the examination and surgery took around 15 minutes each. “My testicles were sore the day after,” he says. “I suppose it felt pretty similar to, like, how it would feel after getting kicked in the balls real hard.”

After a few days of rest and ice packs, he was back to work.

He adds that the copay for the surgery was “nominal.” Still, he says the circumstances around the decision were not ideal.

South Hills resident Eric Leslie says he considered getting a vasectomy “for a while,” but “the political climate that we find ourselves in now” made the decision easy. He’s now scheduled to undergo the procedure in mid-November.

“Do I want to be having this surgery on my body? Not especially,” says Leslie. “But is that an easier decision than someone having to decide that they want or don't want to carry a kid for nine months, or have what might eventually be an illegal abortion? Yeah, it's much easier."

While the exact number of sterilization procedures performed in Pittsburgh remains unclear, reports suggest that the demand for them has increased on a national level. Sara Dixon, the public relations manager for Planned Parenthood of Western Pennsylvania, says that, while the nonprofit health organization “does not currently do any sterilization procedures,” it has followed the push for them post-Roe through information collected by the Planned Parenthood Federation of America.

Dixon points out that the statement “does not reflect data from all Planned Parenthood health centers” or western Pennsylvania, specifically.

While an increasing number of people in the U.S. are apparently seeking sterilization, obstacles to getting them still loom. Schaich says, right before the COVID-19 pandemic she had a negative experience with a surgeon who, during a consultation, tried to convince her not to pursue tubal ligation.

“She was like, ‘Oh, you know, the recovery for the surgery is really six weeks,’ and all this stuff,” says Schaich. “And I was like, okay, that seems odd, because I've known people who have had similar surgeries, and they certainly weren't bedridden for six weeks.”

Efforts to convince people out of sterilization, it seems, are not uncommon. One NPR story from July 29 says “patients who don't have children and are in their childbearing years” reported “difficulties finding physicians willing to sterilize them.”

Rose says that, as a Black woman, she has found that obtaining birth control can be even more difficult for people of color, forcing them to more aggressively advocate for themselves.

“It’s already difficult enough as a woman trying to get people to take you seriously in a health care context, but especially as a woman of color, especially when it comes to reproductive issues, I think you really have to go in,” says Rose. “And it sucks that you have to do half the work on your own. But you really have to go in and show them that you've researched all of the options, and you know that the procedure you want is the best one for you and for your lifestyle.”

In her research, Schaich says one of the “obstacles that a lot of people face is finding a doctor.”

“And I know it depends on a couple of things, like your age. Are you in a stable relationship? Because apparently, people will want to get sterilized, and then they get into a long-term relationship and they're like, ‘oh, maybe I do want to have kids,’” says Schaich.

Schaich says she was able to connect with salpingectomy patients on Reddit, and encourages anyone thinking about sterilization to seek out people who have had the procedure and ask for recommendations.

She adds that if, during a consultation, a doctor tries to steer you away from the procedure, “you can just end it.”

“You're not beholden to these people,” says Schaich. “You can just be like, ‘You know what? This isn't really going the way that I wanted it to. Thanks so much for your time,’ and then find a different doctor. Don't let people bully you out of something that you're sure that you want.”