"People [used to think] it was all gutter punks and bikers. And it mostly was." 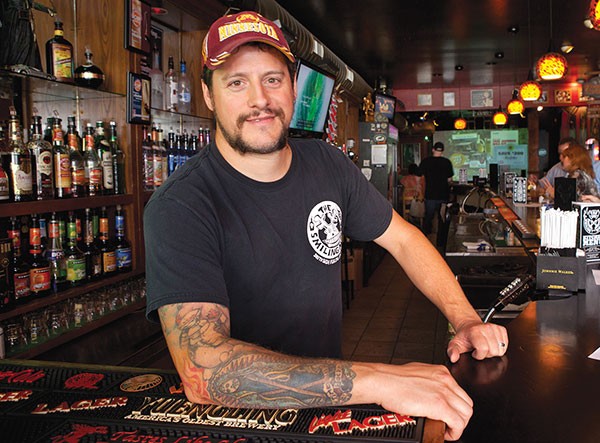 featuring JOE GRUSHECKY AND THE HOUSEROCKERS,

If you haven' t been to the Smiling Moose in five or six years, you likely wouldn't recognize the place today — and as far as owner Mike "Scarfo" Scarlatelli is concerned, that' s for the better. In the late-' 00s, there were times when Scarlatelli wanted to do away with the bar altogether, but instead, he cleaned house, brought in a chef and contracted with Drusky Entertainment to produce most of the bar's music programming.

"This is what I always wanted it to be," says Scarlatelli. "But I didn' t think it would be."

In its early years, the Moose, on East Carson Street in the heart of the South Side, garnered a reputation as a rough-and-tumble place. "People thought it was all gutter punks and bikers," says Scarlatelli. "And it mostly was." He blames former employees for the bad associations; three years ago, he fired a number of staff and started anew. And now, while the Moose is gearing up to celebrate its 10-year anniversary, "It' s more like a three-year anniversary to me," Scarlatelli says.

Scarlatelli, a South Hills native, opened the Moose in 2003, naming it for a bar in Minnesota, where he went to school. He' d worked bar jobs and played semi-pro hockey before coming back to town to open the bar. "I just wanted to have a bar that was a venue for rock shows," he says. He' s also a veteran of punk and indie bands in town, from ' 90s ska-punk outfit Bunjie Jambo to current rock band German Shepherd, and did a stint drumming for punk legends Submachine.

In its early years, the Smiling Moose hosted mostly punk and metal shows, on a stage tucked away in the back of the first floor. It was dark and not entirely hospitable. It wasn' t making much money. For a while, Scarlatelli says he simply avoided the problem; the bar was staying afloat, and he was dealing with other issues, like the death of his mother.

But in 2009, he began to turn the bar around, remodeling it so that shows could take place upstairs. Anti-Flag played a release show at the venue, which began the bar' s relationship with promoter Drusky Entertainment. Scarlatelli bought a point-of-sale system with hidden cameras that he can control from an app on his phone, and figured out that some employees were furnishing free drinks. He fired them. ("Maybe that' s why I like that show, Bar Rescue," he says. "I did it myself, before that show existed!") In time, he brought in chef Christopher Cook, who had been working at Café du Jour.

The downstairs of the Moose is now much more welcoming, and the upstairs is a good spot to find an indie-rock show, and sometimes a local hip-hop showcase. Sean Cho, veteran of Plus/Minus Studios, runs sound. It' s a far cry from when bands were crammed into the corner of the first-floor bar — and having the stage out of the way allows for more space for dining tables downstairs.

It' s been a long journey for Scarlatelli and the Moose, but it' s one that' s ended up where it was meant to. "I just wanted a bar with craft beers, good food and music," says Scarlatelli. "I just made about every mistake possible along the way."