It's a praiseworthy achievement across many of its stated goals, but it also falls terribly short in some crucial areas of architecture. 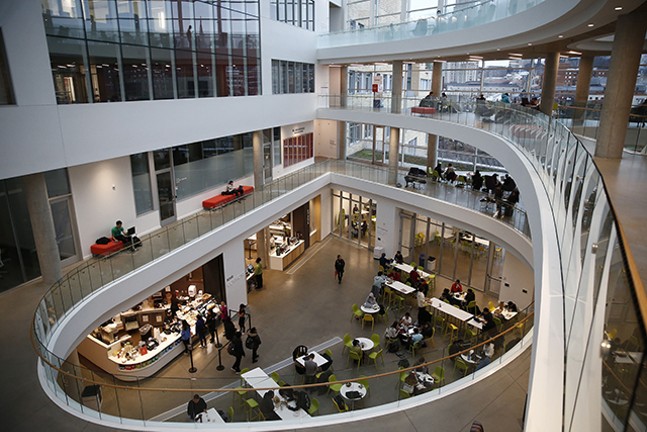 CP photo: Jared Wickerham
Inside the Tepper Business School on the campus of Carnegie Mellon University

After $205 million and three years of construction, Carnegie Mellon University's David A. Tepper Quad is complete. The five-story building in Oakland — built by Moore Ruble Yudell in association with Pittsburgh’s Renaissance 3 Architects — will house CMU's Tepper School of Business, which promotes itself as “the world’s most forward-looking business school,” with an ethos that emphasizes interconnectedness among people and fields of study. Accordingly, said Tepper Dean Robert Dammon, the new building must “showcase and elevate CMU’s culture of cross-campus collaboration and interdisciplinary problem-solving.”

Expectations for new architecture are high at the campus level as well. President Farnam Jahanian called Tepper Quad a “new front door of Carnegie Mellon University.” At opening ceremonies, he concluded, “This building says a lot about who we are as an institution and where we’re going.”

Many of these expectations are well met. Twenty-four classrooms in various configurations are wired for the latest teaching media and accompanying global communications, as is the new 600-seat auditorium, CMU’s largest. The Swartz Center for Entrepreneurship includes 10 “maker spaces” to support the hands-on experimentation of startup development. There is a new center for technology-enhanced learning and an interactive global languages and cultures room. An executive education center occupies the fifth floor, and both a welcome center and fitness center occupy the first. Tepper Quad seems to have a distinct space for every purpose.

Perhaps even more notable are the less specialized spaces. Architect Buz Yudell commented, “there needs to be a diversity of types of space, of characters of space, from sort of quiet to lively, from spaces of movement to spaces of repose.”

So the building is filled with meeting rooms and breakout spaces — unassigned areas for informal collaboration. The first two floors have great swaths of public space, with custom furniture for small clusters of people. In the more private upper floors, coffee stations near extra-wide hallways can accommodate spontaneous conversations. 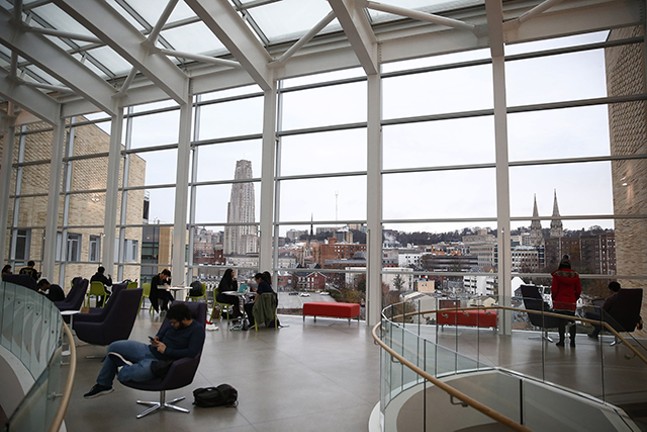 CP photos: Jared Wickerham
Inside the Tepper Business School on the campus of Carnegie Mellon University

The best of these open spaces is the building’s main atrium. Tepper Quad’s sunlit, four-story lobby and food court is traversed by curving walkways with ovoid openings to accommodate stairs and accentuate views. Comparison shopping shows that essentially all new business schools get some variety of a soaring lobby, but this one is positioned as more of a campus-wide amenity.

The problem is that the exterior design of the building appears as an unraveling jumble of missteps and shortcomings. Its yellow brick and horizontal windows haven’t advanced much from the GSIA building of 1952, except for some oddly off-grid windows. One administrator admitted that during the Tepper Quad’s design process, he wanted “to be more inspired by the building,” so the team “changed it and made it more inspirational.”

So the 1950s design has shards of a 1970s building tacked on or pushing out at angles. These misplaced references to previous decades say nothing about a harmonious present, let alone a promising future.

Meanwhile, the metaphorical front door along Forbes Avenue, approached from Craig Street, is actually two small and slightly confusing entries, one for a narrow stair tower, and the other to a long and uncharacteristically dead corridor along the auditorium. The main front door is further up the street, not optimally placed for the neighborhood. Nor does it connect with the spaces above the way the building façade suggests that it does.

The whole building aims toward the rest of campus at a strangely oblique angle, with the pleasant atrium presenting a strangely blank glass façade to pedestrians from the other direction. From inside the atrium, you seem to be looking at the bus stop. That area in that view will be getting a redesign, but not enough to anchor such an important campus view.

The David A. Tepper Quad is a praiseworthy achievement across many of its stated goals, but it also falls terribly short in some crucial areas of architecture. The building needs to articulate a vision of the future as emphatically as its advocates do.