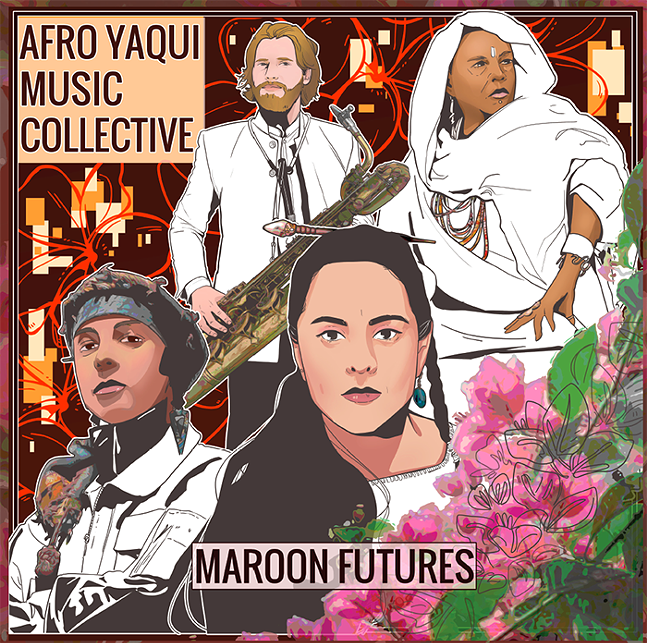 Photo: Courtesy of Afro Yaqui
Album cover of Maroon Futures.
It’s not common to hear pipa, saxophone, erhu, and lyrics in Spanish, English, and the Nahuatl indeigious language all in the same space. But Afro Yaqui Music Collective brings them all together in their second album Maroon Futures.

The music collective’s latest album, available now from Neuma Records, imagines a world after capitalism and without the effects of colonization from Christopher Columbus’ journey to the Americas. The collective, which formed in Pittsburgh in 2016, represents a wide array of cultural backgrounds and musical traditions that are on display in their music. The collective is also well known for its members’ spontaneity and improvisation.

“[We were] constantly calling each other and trying to find out if we could modify things on the fly,” says vocalist Gizelxanath Rodrigeuz. “So it was hectic, but it was also exciting. And now that we can hear the entire product, we're so, so eager to just show everyone the results.”

Afro Yaqui has performed the songs on Maroon Futures for years, with each iteration slightly different from the one before. They tried to combine the original compositions with current versions of the songs. Although the album has roots in jazz music, the six songs blend and defy genres as they stretch for several minutes.

From the first song, “Nonantzin,” which is sung in Nahuatl and is a tribute to Mexico's Indigenous communities struggling for visibility, Afro Yaqui weaves together cultures and musical traditions that are not often heard together.

“I think you should go into the album expecting to be challenged,” says bassist Beni Rossman. “There are songs that are in awkward time signatures or have weird parts that may just not sit right.”

The challenges range from the 13/8 and 26/16 time signatures and the polyrhythmic meter, to the realities of injustice that the songs’ contents and album’s title ask listeners to consider. The album is partially named for the Maroon communities across the Americas, in which escaped slaves lived with Indigenous people and disaffected white people. These communities formed as early as the 16th century and had to fight against colonists, and Afro Yaqui wants to emphasize that those struggles against colonialism and white supremacy still continue in new forms.

“Even though slavery ended, now we have mass incarceration, now we have police brutality, and now we have seemingly random acts of violence against people of color,” says composer and baritone saxophonist Ben Barson. “And so we feel like we need a new Maroon movement today that's going to break out of this plantation society that we live in.”

Profits from the album will go towards a radical group of Black community farmers based in Philadelphia who called themselves “urban Maroons.” The park provides free programs to the greater Philadelphia area, from free produce programs to free educational partnerships and health and wellness community programs.

The album’s title also pays homage to Russell Maroon Shoatz, a former Black Panther and soldier of the Black Liberation Army who has been imprisoned since 1972. Shoatz was diagnosed with rectal cancer in 2019 and tested positive for COVID in 2020, and Afro Yaqui is involved in the campaign to free him from prison so he may receive the medical services he needs.

CP Photo: Jared Murphy
Afro Yaqui, 2019
The themes of liberation extend beyond the title of the album into the content of the songs. “La Cigarra,” which translates to “the cicada” in Spanish, is about how cicadas only sing about every 14 years after emerging from underground, which the collective uses as a metaphor for political prisoners, including Shoatz.

Each song has its own connection to political history and contemporary struggles, many of which are personal to members of the collective. In addition to Rodrigeuz’s connection to “Nonantzin,” “Ya Habibi'' showcases hip-hop artist and activist Nejma Nefertiti and was written by Barson, Rossman, and Nefertiti.

“Ya Habibi” was originally performed by the Egyptian singer Umm Kulthum. Nefertiti’s rendition reimagines the song as what Rodrigeuz calls a “pan-Islamic journey through LGBTQ+ identity” in a hip-hop love song that celebrates Nefertiti’s identity as an LGBTQ+ woman with Iranian, North African, and Indigenous American roots.

“We Refuse to be Used and Abused” was also originally written by a member outside of the collective, Fred Ho, who was the first to combine Chinese opera with traditional African American music. Ho, as Barson’s mentor, introduced Barson to this kind of musical blending, which Barson says “really opened up space for a lot of new instrumentations and new arrangements.”

Ho’s influence is audible in “Insurrealista,” which features pipa and guzheng in a celebration of female activists, as well as “Sister Soul,” which Barson composed for the erhu and pipa to highlight the talents of Mimi Jong and Yang Jin, respectively. Barson says the song is a tribute to “matriarchy, which is not the opposite of patriarchy. It's not like a ruling class of women, but it's a world where gender doesn't structure power relations and where we can actually create societies and identities that are as fluid as we are.”
Afro Yaqui Music Collective afroyaquimusiccollective.com