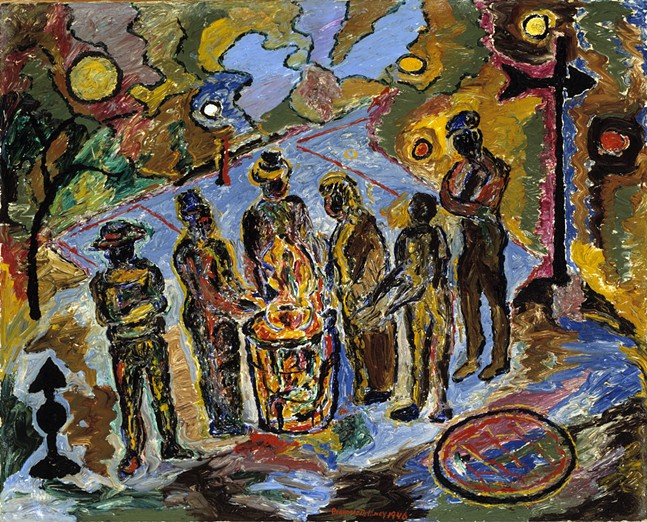 It's best not to rush through the pieces in African American Art in the 20th Century, a traveling Smithsonian exhibition opening at the Westmoreland Museum of American Art.

“One of the important things is to give the pieces a little time,” says Smithsonian American Art Museum chief curator Virginia Mecklenburg, adding that certain essential details may not be obvious at first glance.

Doing so enables visitors to more deeply appreciate paintings like Evening Rendezvous by Norman Lewis, considered one of the few Black artists of the early Abstract Expressionist movement. Despite the painting’s romantic title and seemingly formless imagery, Mecklenburg points out that in the haze of the murky greens and vibrant blues and reds is “a gathering of figures in white robes with pointed hats,” alluding to the disguises worn by the Ku Klux Klan.

“If you don’t give it more than just a quick look, you won’t realize that there’s all of this embedded meaning there,” she says.

Evening Rendezvous is one of 45 works, including paintings, sculptures, and prints, by 34 Black American artists. On view from the Feb. 16-May 10, the show spans from the 1930s through the 1990s, covering the Harlem Renaissance, World War II, the Civil Rights movement, and global forces that shaped the chosen artists. Mecklenburg believes African American Art in the 20th Century caters to people who may not be able to travel to the Smithsonian American Art Museum in Washington, D.C., to experience the work of artists who have made major contributions to “who we are as a country, as a culture, as an art community.”

Westmoreland chief curator Barbara L. Jones agrees, adding, “The art reflects the American experience through the eyes of these artists, and we are excited to offer our visitors the opportunity to learn more about them.”

It also adds to the Westmoreland’s mission of spotlighting groups not traditionally highlighted by the white-dominated art world and examining how that affects how they're perceived. This was evident in its spring 2019 show, Mingled Visions, another traveling exhibition that used photographs by Edward S. Curtis and Will Wilson to critically examine Native American representation in art.

Mecklenburg says the show includes a mix of Black artists “universally recognized as major figures of 20th century art,” including Jacob Lawrence and Romare Bearden, as well as lesser known artists. Overall, she says, the selected artists often use personal experiences to address larger issues. She describes how the 1946 oil painting Can Fire in the Park, which depicts figures huddling around a contained blaze, came from its artist, Beauford Delaney, who had to spend the night in a park after being unfairly kicked out of a boarding house when he first moved to New York City.

“He became sort of included with the other people in that park,” she says. “That says something about fundamental humanity [of] people, no matter who they are or what their situation is.”

Some pieces touch on the more specific conflicts of identity and the yearning for connection among African Americans disenfranchised by racism, war, and other factors. Mecklenburg cites how a 1934 self-portrait by Harlem Renaissance artist Malvin Gray Johnson incorporates the imagery of African masks to present a more complex message.

“It’s such a profound statement about Johnson and how he is thinking about himself — his identity as a Black man, what his relationship to Africa is, what it means to be a painter,” she says. “All of that is in this one, not terribly large rectangular canvas. It gives you a lot to think about.”

She also points to Tambo, a 1993 sculpture by Melvin Edwards that uses found objects welded together to memorialize Oliver Tambo, the former president of the African National Congress who helped to end apartheid in South Africa while in exile.

While the show comes at a perfect time for Black History Month, Mecklenburg sees it more broadly as coming at a tumultuous political and social time in America and around the world.

“This is a moment in our contemporary history where many people are trying to understand perspectives of other people,” says Mecklenburg. “It seems to me that this show was a great way to understand perspectives from recently, but also going back in time, and what [the artists] were thinking about, and what they wanted to capture in paint. [They] don’t paint accidentally, they paint intentionally, and they have something that they think is very important for themselves to express, but also for other people to think about.”